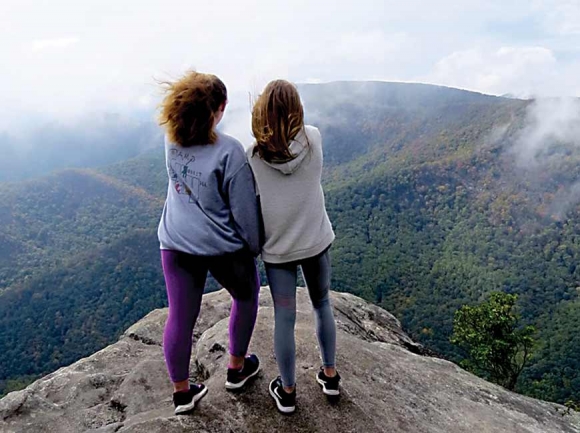 The girls get a look at the Southern Nantahala Wilderness from Pickens Nose. Don Hendershot photo

I have a special affinity for Pickens Nose. In 1998 I was a volunteer with the Peregrine Fund and North Carolina Wildlife Resources Commission monitoring peregrine hacking sites for returning birds. Pickens Nose was the site I monitored and a single male returned to the site. No mate showed and the male soon set sail. About two years later the male did find a mate but not at Pickens Nose — at Devil’s Courthouse on the Blue Ridge Parkway, a sign the peregrine hacking program was working.

But we weren’t looking for falcons, just an easy hike to great views. We were socked in for the hike up and when we first got to the ridge line. We crawled around on some of the promontories, enjoying the fog and the wind then stopped for a bite of lunch. We got lucky and the sun burned through and the fog we had been peering into gave way to gorgeous views of the Southern Nantahala Wilderness. There, looking down with the sun shining, we could see patches of reds, yellows and oranges; not a lot of color but the most we had seen this fall. Then one day later in the week I had to make a quick run to the store. When I got down to the Smoky Mountain Expressway and looked up at the Balsam Mountains, it was like multicolored paints had poured down the mountainsides; there had been an explosion of color virtually overnight.

So last Sunday my bride and I took a short drive along the Blue Ridge Parkway and it was pretty spectacular. It seems the best color was between 3,500 and 4,000 feet in elevation. There was still color above that but lots of steel-grey winter hardwoods were showing. To say it’s been a strange color season would be an understatement. I think many, myself included, were beginning to wonder if we were going to see color or if we were just gonna go from green to brown to grey. But it’s upon us now and if “up top” was any indication it may not be with us much longer — after all it’s almost November.

But I think this weekend will be quite colorful and you owe it to yourself to get out and enjoy it. And, as I’ve preached before, don’t be afraid to park the car and hit the trails a little, while vistas are wonderful in autumn, immersing one’s self in it — touching the color, smelling the color —feeds the soul.