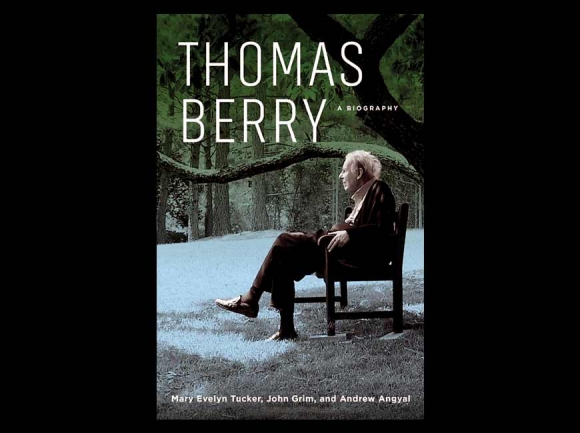 During those years following the publication of his lynchpin book of nonfiction titled The Dream of the Earth, and while I as was making my living as a freelance writer, I met with him and did a series of interviews for various regional and national publications; and as years went by I ended up reviewing almost all of his books which were to follow, which included The Great Work and The Universe Story.

In the end, Thomas Berry and I became friends up until the time of his death in 2009. He graciously wrote endorsements for a couple of my own books during those years which, now looking back at age 70, I consider the highlights of my career.

Thomas Berry, who was born and raised in Greensboro, had a life unlike anyone I’ve ever met or known. In Thomas Berry: A Biography, three of his friends that knew him well have combined their knowledge and talents to create a comprehensive story of this man’s remarkable life and legacy. We start with his early life and follow him through his student years and to his induction into the Passionist Order of the Catholic Church. From there we follow him as an ordained priest and monk to outposts around the world (China and Europe) before eventually returning to the U.S. to teach at Fordham University, Barnard College and Columbia University, and then to his focus on human and earth history and the founding of the Riverdale Center for Religious Research along the Hudson River in New York state and consequently the writing of his books on helping to restore the continuity of humans with the natural world, replacing the modern alienation from nature with a sense of intimacy and responsibility.

So, in the end, how do we access this man’s life and legacy? I have used the term “saint” to describe him, here, to characterize what he has left for humanity to ponder and process as we go forward into the dark of these stormy and troubling times.

If you look at the facts, the overall arc and the accomplishments of Thomas Berry’s life, one can easily compare him to other great spiritual beings and leaders in human history. St. Francis of Assisi comes to mind, first and foremost. Followed by other spiritual masters such as the Persian Sufi masters Hafiz, Rumi and Kabir, or teachers like Teilhard de Chardin, whom Berry much admired. No matter how you qualify his achievements or who you compare him to, he stands alone as the old soul that he was, and as someone that lived a life that one can only call admirable, if not exemplary. Or can I use the term “saintly” again? His personality and concerns, if not his writings, are certainly of that caliber in this reviewer’s opinion.

The authors of his biography describe him like this: “As someone who had a deep feeling for human suffering and a profound concern for the destruction of the life systems of the planet, he was unfailingly kind, unstintingly generous. He had an irrepressible joy that spilled over into hospitality to whomever he met. People felt they were his close friends even after one meeting. He had an unusual charisma as well as a prophetic voice that could thunder at those disrupting Earth’s ecosystems and roar at those institutions failing to respond. His criticisms of education, politics, business and religion were usually scathing. But he was always identifying those who were change makers on the borders of the establishments. He could not abide the withering of the Earth’s beauty, the diminishment of its biodiversity, the marginalization of its struggling peoples. He brooded over the tragedies humans were inflicting or enduring.”

At a time when the world is in dire need of charismatic spiritual and socio-political leaders, when we look around there aren’t many, if any, in sight. But perhaps such a person can be identified and can rise to such a position posthumously. That being the case, one can only hope that the values and ideas espoused by Thomas Berry will find a place of prominence and a very large readership at a time when the elevation in human consciousness and spiritual awareness is paramount. Finally, Thomas left us with a simple yet profound mantra as to how to live our lives: “Live — fully. Laugh — often. Forgive — instantly. Love — always.” So, if you are someone who likes to read biographies, or even if you aren’t, I urge you to pick up this book and read it cover to cover. If you don’t come away with a greater awareness and compassion for humankind and the planet Earth, I’ll be a monkey’s uncle.

Thomas Crowe is a regular contributor to The Smoky Mountain News and is author of the award-winning book of environmental nonficton Zoro’s Field: My Life in the Appalachian Woods. He lives in Tuckasegee in Jackson County and can be reached at This email address is being protected from spambots. You need JavaScript enabled to view it.