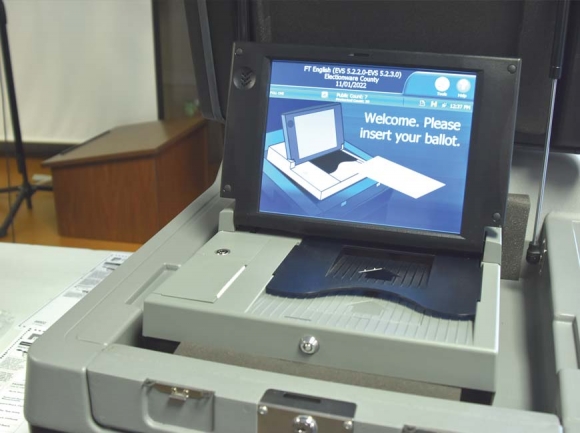 Next year, voters in Haywood County and across the state could see new machines at their polling places. Cory Vaillancourt photo

Election officials from across the region gathered in Haywood County last week to be among the first to witness public demonstrations of new state-certified voting systems designed to bolster both the efficiency and the security of the state’s elections.

“We definitely want to assure voters that their systems are secure,” said Karen Brinson Bell, executive director of the North Carolina State Board of Elections. “I think the most important thing for voter confidence is to have moments like this, where they’re able to see demonstrations of the voting equipment.”

Existing equipment, made by a company called Election Systems and Software, is set to be decertified on Dec. 1. Haywood County is one of few counties that still uses touchscreen voting systems, but will soon join the rest of the state in utilizing paper ballots.

“The equipment that we’ve used for 15 years, it’s reached the end of its useful life,” said Robbie Inman, Haywood’s Board of Elections director.

That means that once this fall’s elections are over, counties may choose from one of three new systems certified by the NCSBE. State statute, though, demands that prior to making any change, elections board members must witness a demonstration of the systems.

The public demonstration held at the Haywood County Senior Resource Center on Sept. 12 was the first of five such sessions to be held across the state and as such drew county elections board members from as far as Polk and Henderson counties.

What they saw were essentially sales pitches from three companies hoping to do business with North Carolina counties  — HartIntercivic, Clear Ballot and ES&S.

“In the whole state of North Carolina currently the old legacy equipment they have is from ES&S, so 100 percent of the state is using our equipment,” said Will Wesley, director of business development for Omaha-based ES&S. “Now you’re going through a new sales cycle where everyone’s got to choose and that’s what this is about today. The three vendors that are here are actually going to show their equipment to the counties and then the counties can make a decision what they want to do going forward.”

Wesley’s company, though, almost wasn’t invited to the party — according to Carolina Public Press, security advocates raised concerns over the bar codes ES&S uses to tabulate votes. An Aug. 23 vote by the SBE cast aside a motion that would have implemented stricter certification requirements that would have essentially excluded ES&S. Still, ES&S has become a familiar name in the industry over its 40-year history, and has sold plenty of the new machines as well.

“The express voter ballot marking device, we’ve sold over 70,000 of those to date across the country. It’s the most popular ballot marking device that there is on the market. It’s proven,” said Wesley, former elections director for the city of Detroit. “It’s not something that we’re developing and we’re kind of putting out there to see [if it works]. It’s proven. As a matter of fact, your neighbor to the south, South Carolina, just purchased it statewide.”

Clear Ballot, by contrast, is the newest of the three companies to go through federal voting system certification.

“We’re built from the ground up since 2009, which a lot of the other systems are built off legacy platforms, so they’ve been around for a long time, and they’ve kind of struggled with the technology that they’re anchored to,” said Bill Murphy, director of sales for Boston-based Clear Ballot. “We don’t have that burden, which is nice.”

Founded in 2009 as an audit company, Clear Ballot has been in the voting system business since 2014 and currently serves about 20 percent of Florida and 70 percent of Washington and Oregon.

“We’ve actually been able to save the folks out there, in efficiency savings,” Murphy said. “They’ve been able to pay for our system using it in like two elections because of the processes they had to go through with the old systems.”

The third company, Hart InterCivic, appears to mingle the best of both ES&S and Clear Ballot.

“We have a mix of our legacy system that’s been in place since the early 2000s, and our new system, which was first federally certified in 2015,” said Sean Phillips, a sales consultant with Austin-based Hart InterCivic. “We are a pure paper-based system. We provide a ballot that is equal for all voters, whether they vote on an accessible device or by hand marking the ballot.”

While elections board members at the event were reluctant to go on the record with their impressions of the three systems, questions and conversations overheard at the demonstration largely centered around bar codes.

“The other thing that sets us apart from some of the vendors is that we do not encode voter selections into a barcode,” Phillips said. “We always use a human-readable portion of the ballot to derive the tabulation of the votes. It has been posited that if the human readable thing that is on the piece of paper isn’t what drives the tabulation and it’s in a barcode, it could be changed. We just want to fight the perception of that by sidestepping it completely and providing a paper-based system that the human readable portion of that ballot is what drives the tabulation.”

Inman said that right now it takes 197 of the existing touch screen units to conduct a countywide election in Haywood, and the new systems would all require additional units, called tabulators.

The costs of the new systems vary, but two years ago, Haywood Commissioners allocated more than $800,000 towards the purchase of new voting machines, however, failures by the state to certify new systems until recently kept that can rolling on down the road.

On the security front, Inman said that although there is a chance that fraudsters could infiltrate, say, a voter registration database or theoretically engage in identity theft to influence the results of an election , if fraud occurs, it won’t be at the ballot box. Haywood’s election systems — past, present and future — had not and would never be connected to the internet.

Haywood’s elections board members, like those in other states, will now weigh their options and make some sort of recommendation to commissioners, who’ll be on the hook for the final call, and the funding.