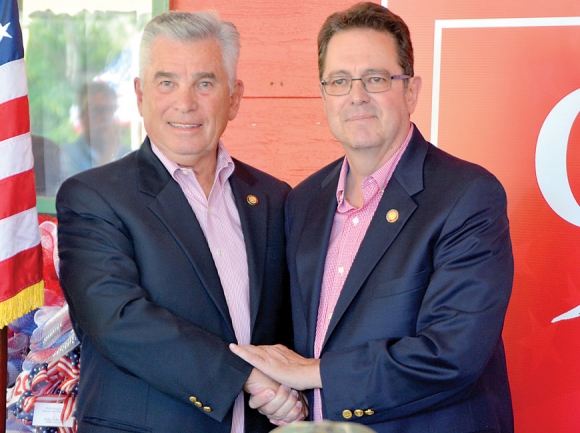 A powerful voice for Western North Carolina in the North Carolina General Assembly is about to pop the kickstand on a long career in public service, but even though Franklin Republican Sen. Jim Davis has already passed the torch to his heir apparent, at least one other Republican is lining up to take a crack at his seat.

“I am a strong proponent of citizen legislators — those individuals who bring their talent and energy for public good. I believe they should hold their seats for a limited time so others can then step forward with their unique perspectives and skills,” Davis told a crowd assembled at the Macon County Republican Party headquarters on Sept. 7. “That limited time has come for me. I will not be running for re-election in 2020. I am proud of my record, and now it’s time to go home to my wife and family.”

Davis has served as N.C.’s westernmost senator for the 50th District since first winning election in 2010, when he narrowly defeated Democratic incumbent John Snow by just 161 votes out of more than 60,000 cast. The next election in 2012 was a rematch between the two, but it was barely a contest, with Davis topping Snow by almost 13,000 votes, good for 57 percent.

Prior to that, Davis served for a decade on the Macon County Board of Commissioners, an experience he repeatedly cites as formative in his identity as a legislator with a local government mindset focused on county-level policy.

By design, Davis’ announcement at party headquarters coincided with an announcement from the man who replaced him on the Macon County commission and now hopes to replace him in the Senate.

“They say a picture paints a thousand words, so rather than say a thousand words, we’ll just paint a picture,” said Rep. Kevin Corbin, who with Davis proceeded to unwrap a large red campaign sign emblazoned with the words “Corbin N.C. Senate” in white.

Corbin held Davis’ commission seat for six years until winning a legislative seat of his own in 2016  — with more than 72 percent of the vote — as N.C.’s westernmost representative in the General Assembly. In 2018, Corbin won re-election with just over 73 percent of the vote.

“I think he has an excellent chance to win the Senate seat,” said Aubrey Woodard, chairman of the N.C. Republican Party’s 11th Congressional District. “His experience and the vote totals that he had while he was running for his current seat in the last two elections indicate he has significant support.”

That support was evident at the event, where a who’s who of western Republicans from across Davis’ seven-county district had gathered for the dual announcements. The biggest show of support for Corbin came from Davis himself, who said during his speech that he would give Corbin his formal endorsement.

“Kevin has already proven that he can win an election on the local level,” Davis said. “He has local government experience. I think it really enhances the legislature when you have people that have served in local government. Kevin has those credentials, and he’s served very well.”

Corbin’s experience as a commissioner — as well as the 20 years he spent on the school board before that — likely had something to do with garnering Davis’ support.

That’s a mentality shared by Corbin, who said he was honored to receive Davis’ backing.

“Jim Davis is a statesman, whether you agree with him politically or not, it makes no difference,” said Corbin. “He’s a gentleman and a man of his word.”

Corbin said Davis had begun talking to him about the possibility of running for his seat a year ago, but Corbin was reluctant to let go of the influence he’d built as House deputy majority whip.

Eventually, Corbin relented because he wanted to be sure Davis’ eventual successor had plenty of experience. Some persuasion from Senate President Pro Tempore Phil Berger didn’t hurt either.

“He called me to his office twice and his words to me were, ‘You’ve got respect in this building and it doesn’t matter whether it’s on that side [the House] or on this side [the Senate], and we will let that carry over,’” Corbin said. “He called me on the phone just a few days ago, and said, ‘I want you to add my name to the growing list of senators here that want you over in this chamber.’ What that means to me is, when I get there, trying to represent Western North Carolina, that I’ve got a group of men and women that will give me their ears.”

Corbin’s coronation isn’t exactly assured, with initial opposition emanating from within his own party. During the event, as party officials were recognizing various current and former elected officials and candidates in attendance, a woman in the back of the crowd spoke up and announced that she too would seek Davis’ seat.

Dr. Sarah Conway is a Jackson County Republican who practiced hospital-based diagnostic radiology for over 20 years. Conway said she’d subsequently become interested in policy, and was determined to make the region “better and healthier,” by focusing on the region’s well-documented opioid crisis.

“This is something that breaks my heart,” she said. “With my medical background, we need more real people that have specific knowledge about a particular area to run, and to help in those specific areas.”

Conway faces an uphill battle against Corbin, who over his 35 years as an elected official has acquired substantial name recognition and strong local approval, along with institutional support from his party and the incumbent Davis. Still, Conway thinks her message can resonate with Republican primary voters.

“I think it’s the right person, at the right time, for the right crisis,” she said. “We have to look at our [opioid] crisis in the face. I’ve talked to so many people who have been affected by drug overdoses. I haven’t met [Corbin] and he seems like a nice guy, but the issue is, how are we going to solve this problem? They’ve been sitting on their hands for the last 10 years.”

That’s not exactly true — Corbin and Davis have been among the most active N.C. legislators in terms of addressing the opioid epidemic that’s impacted the western reaches of North Carolina more than probably any other region in the state.

In 2017, Corbin was a sponsor of the STOP (Strengthen Opioid Misuse Prevention) Act in the House, while Davis was a primary sponsor of the companion bill in his chamber.

An Aug. 29 press release from Democratic Gov. Roy Cooper’s office said that in 2017 unintentional opioid-related overdose deaths had increased 34 percent over 2016, but in 2018, they’d decreased for the first time in five years. Earlier this summer, Cooper signed another widely-supported Davis bill, the Opioid Epidemic Response Act.

If Corbin survives his primary challenge, it’s possible he’ll face a Democratic opponent in November 2020, but that may be just as much an uphill battle as Conway faces.

“Kevin will be a formidable candidate,” said Myrna Campbell, Democratic Party chair of the most populous county in Davis’ district, Haywood. “I still think there may be some interest from the Democratic side. In the 2018 election, we were encouraged by the state party to contest every seat in the Senate and in the House.”

If an anti-incumbent or anti-Trump movement develops, that could be beneficial for Dems in claiming an important and previously untouchable Republican Senate seat.

“I see a chance. Especially if you can win big in Jackson and Haywood counties you can afford to lose the red counties in the west,” Campbell said. “I will actively seek a candidate. We were just waiting for Davis’ formal announcement.”

Then, there’s the subject of Corbin’s House seat, which he won’t be sitting in come 2021, regardless of his current aspirations.

Republicans still enjoy majority status in both chambers of the legislature, but it’s no longer veto-proof, thanks to a 2018 election season that saw substantial gains by Democrats who have since used that newfound power to block several Republican initiatives, including a proposed budget that does not include the Medicaid expansion called for by Gov. Cooper.

Unlike Davis, Corbin supports Medicaid expansion in North Carolina and has also bucked urban party leadership with his support of the Fiber NC Act, meant to remove obstacles to municipal installation and maintenance of broadband infrastructure.

“I’m very optimistic about holding it,” Woodard said of Corbin’s soon-to-be vacant House seat. “I know we have one individual who I can’t name at this point who is very, very committed to doing something here, but we have to wait for his final decision.”

The stakes will be even higher in 2020 for N.C. Republicans, who will likely sink or swim — as they did in 2016 — with voter opinion of Republican Donald Trump, who will seek re-election to the presidency on that same ballot.

Whichever party controls the N.C General Assembly in 2020 will have a big say in the constitutionally mandated re-drawing of districts, which since 1790 has occurred every 10 years.

Those maps, in turn, will be revisions of maps that are changing right this moment.

A recent unanimous ruling by a bipartisan panel of Superior Court judges says that N.C.’s current legislative districts are an illegal gerrymander and must be redrawn. New maps are to be submitted in the coming days, but they won’t likely affect the districts of Western North Carolina’s current legislators Joe Sam Queen, D-Waynesville, Michele Presnell, R-Burnsville, Davis or Corbin.

“It doesn’t sound winnable, statistically, but I think the state party will encourage us to have someone run for every seat, so I think there will be an effort made even for Kevin’s seat. Maybe the 72 percent [vote total] is because it’s Kevin,” Campbell said of the well-regarded Corbin. “If it’s not Kevin, maybe it’s closer.”