After years of disuse, a hidden gem in the heart of Waynesville’s downtown is finally ready to reclaim its rightful role as one of the community’s social and business hubs.

“I’m very bullish on Waynesville and Haywood County in general,” said Michael Hoffman, executive vice president of Asheville-based real estate services firm Tessier Associates. “I’ve done a number of deals in Cullowhee and Sylva, but this is our first listing in Waynesville, and we are very, very excited about it.”

Built on Church Street in 1927, the three-story 16,000 square-foot building is located just off Waynesville’s tony Main Street and was designed by British architect W.H. Peeps, a well-known name in North Carolina architectural circles.

Originally constructed for the local Masonic Lodge, it was lost to them through bankruptcy just three years after it was built. Renovations in 1973 brought the structure back up to date, and it was placed on the National Register of Historic Places in 1988.

Recently, the building was home to a restaurant and private club, called the Gateway Club, but it has remained totally vacant for the past several years.

On April 12 of this year, the .36-acre parcel, which includes the 17-space parking lot directly adjacent to it, was sold for around $900,000 to Mandir Street LLC, a group headed by local businessman Satish Shah and members of his immediate family. Shah also owns the Best Western in West Waynesville, and a Hampton Inn slated to open soon in the same area.

The building offers several very different opportunities for entrepreneurs interested in leasing portions of the space. On the first floor is a bar and restaurant space that features a full commercial kitchen with the capacity to seat and to serve more than 150 people.

“The objective is to lease this space to a restaurant operator that appreciates what actually exists here,” Hoffman said. “It would have to be a fairly large operation. It wouldn’t be a mom-and-pop sub shop, but, you know, a nice sit-down or buffet-type restaurant, something along those lines. As far as cuisine, we’re open to maybe something that isn’t already here in Waynesville.”

Hoffman said he was ready to listen to all offers, but was seeking a regional-type operation that might already have locations in places like Atlanta, Charleston, Charlotte, Raleigh or Savannah.

“We’re basically scouring the entire Southeast looking for restaurant operators,” he said. “The commercial kitchen is fully equipped and is available to whoever leases the space. If someone were to come in and have to purchase all that equipment new, you would easily spend probably $150,000 on new kitchen equipment.”

The second floor of the building offers an entirely different concept altogether. Currently, it’s home to more than a dozen small rooms that could serve as mixed-size offices.

“The smallest we have is I believe about an 80 square feet office and then it goes up to about 250 square feet, which would be ideal for an executive and perhaps an assistant or a two-person office,” Hoffman said. “There’s two conference rooms that would be available to our tenants, and one of them is probably about 400 square feet. It’s quite large. We’ll also provide free wifi access.” 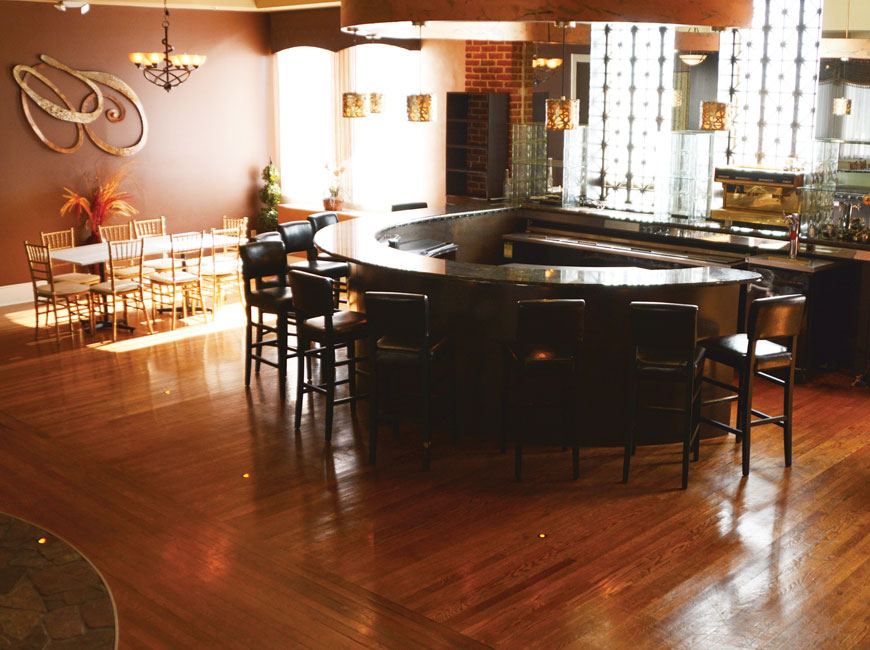 Returning to his theme of flexibility, Hoffman said that he’d consider long-term leases, short-term leases by the month, multiple suite rentals or even possible a co-working environment that offers space by the day, or on a drop-in basis.

“We think there’s a need for it in Waynesville and Haywood County,” he said. “We’re really targeting those small businesses. Some of them may be working out of their homes now, but need a more traditional office, an area to meet a client or customers. Right now, the intent is just to provide the individual office spaces but if somebody came in and said I want six, absolutely we would lease them six spaces.”

Most of the renovations on the first and second floor are complete, but for some minor patching and painting work that’s still under way. Hoffman said that office tenants could move in “immediately,” and that any serious restaurant would take about a month to get off the ground once in the space, but that’s ready to go as well.

Then, there’s the third floor ballroom and mezzanine levels of the building, which Hoffman said the Shah family would operate. That makes a lot of sense — as significant players in the local hotel industry, it’s not hard to see them ushering conventions, weddings and large conference groups into the space, which features stunning views of the surrounding Great Smoky Mountains.

“I think there could a lot of synergy between the event space and the restaurant,” Hoffman said.

Above all, the current economic climate in Waynesville — and Asheville — makes the space an attractive proposition to tenants looking for all the cache of and proximity to the Asheville market, without the price.

“In our opinion, Waynesville is a very vibrant downtown and we see it for entrepreneurs or businesspeople, restaurants, that type of user, as a lower cost alternative to Asheville,” he said. “It’s no secret Asheville prices have just gone through the roof, so we see this as a more economical area for a business that wants to take advantage of Western North Carolina — all the people moving here, and visiting here.”

“If this building was located in downtown Asheville,” he said, “We would probably be getting rents that would be — I don’t want to say twice as much, that’s probably a little bit of a stretch — but, close to double, maybe close to double.”