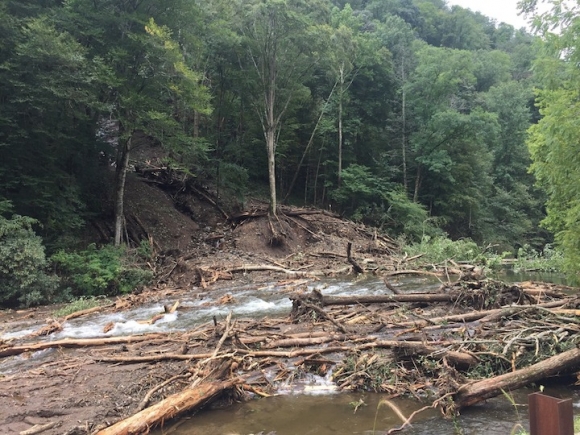 Hazards created by recent landslides into the Nantahala River within the Nantahala Gorge have resulted in a suspension of all commercial rafting and kayaking operations, and a recommendation that individual paddlers avoid the area.

"The river is a dangerous place to be right now,” said David Perez, Acting Nantahala District Ranger. “Please refrain from visiting the area. We are working as quickly and safely as we can to get the river back open."

The U.S. Forest Service finished assessing the landslide locations Tuesday, Aug. 27, and found multiple locations with hazardous debris in the river. There are places in the river where debris — consisting of woody debris dangerous to recreationists — have created a 90 percent blockage and the water has created diversions around the blockage. These diversions could result in erosion of the embankments, which could compromise the infrastructure of nearby roads and bridges.

The Forest Service is working to clear the debris and blockages to restore water flow. The agency is working with contractors for the removal and has assembled an incident management team to oversee operations. Visitors should avoid these areas to ensure their own safety and that of crews assessing and clearing debris.

A severe deluge dropped 3.5 inches of rain in the Nantahala Gorge in Swain County Aug. 24 and triggered slides that covered the road in four locations within a half-mile stretch on the western side of the gorge and spread debris from the mountainside into the river at three locations. The road through the Gorge, U.S. 19, was closed through the evening of Aug. 26.

National Forests in North Carolina will post updates and photos at www.facebook.com/nfsnc and twitter.com/NFsNCarolina.