This must be the place: Let it wander on my mind. Goodbye, Neal. 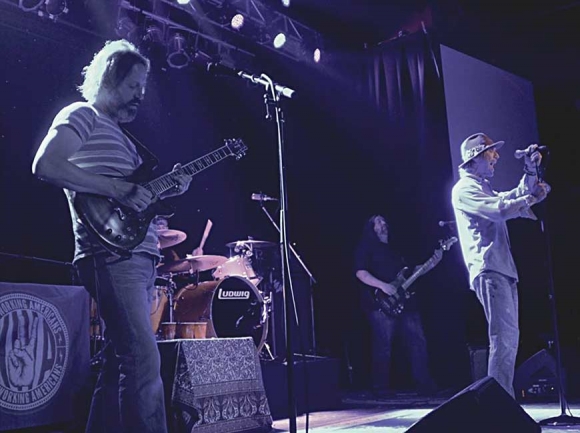 Heartbroken and stunned. That’s about all I can say or feel at this moment with the tragic passing of singer-songwriter and guitarist Neal Casal.

An absolutely incredible soul and bright light in our scene was tragically snuffed out Monday evening. I still can’t take the words I’m typing for truth right now. I’ve said it a million times and I’ll say it again: Neal Casal was one of the greatest guitarists I’ve ever seen.

In this column, I snapped that photo of Neal when his band Hard Working Americans played The Orange Peel in Asheville a few years back. I remember standing in the photo pit with Neal looking down and giving me a smile and a nod.

We’d crossed paths on so many occasions over the years, and I had the sincere pleasure of interviewing him a few times for his work in the Chris Robinson Brotherhood, Hard Working Americans and recently with Circles Around the Sun (CATS).

Anyone who knew Neal, knew not only of his talent and potential, but also how there was never, ever any ego attached to his work and attitude: he simply loved playing music. That was it. Everything was about being onstage (or off) and jamming out with your buddies, this innocence factor of why we all got into music (and live music) in the first place.

It was just past midnight, heading into early Tuesday morning, when I received a message from a friend in the music industry confirming Neal’s exit from this world. I was shocked. “Wait, didn’t he just play Lock’n?” I replied, hoping it was a mistake. Sadly, it wasn’t.

Neal and CATS had played the late-night Thursday set (this past week) at the massive Lock’n music festival in rural Virginia. He also jumped onstage Saturday night to play a few Grateful Dead tunes with Bob Weir, Oteil Burbridge and friends — a “who’s who” of the jam and rock scene. From all accounts, it was a pretty special performance to witness, as was any gig or sit-in Neal found himself part of.

I then remembered I have a 37-minute unpublished interview with Neal when he and I spoke just this April. I pulled it out of my files and put it on. There it was: the phone ringing, Neal’s jovial tone and laughter.

We had only scheduled 10-15 minutes, but, for some reason, dove pretty deep. The conversation touched on the new CATS album to his early life in New Jersey, playing with Blackfoot, and what new projects he had on the horizon.

But, what really stuck out, was how excited he got when I told him I had recently got to hold the late Clarence White’s legendary “B-Bender” guitar. Guitarist for The Byrds, White is regarded as one of the greatest who ever picked up an electric six-string.

White seamlessly fused rock-n-roll and country music, forever changing the landscape of American music with songs like “You Ain’t Going Nowhere” and literally every other melody on the landmark “Sweetheart of the Rodeo” album (1968).

For years now, country/bluegrass legend Marty Stuart has owned the guitar, of which, Marty let me hold the instrument when I interviewed him for Smoky Mountain Living this spring on his tour bus in Florida.

Neal freaked out in joy and was so happy for me, saying how the “B-Bender” was literally his favorite guitar and how he always wanted to hold it, too. He then told me about how he’d been diving into classic country music lately, and how it was influencing the current direction of his music.

The conversation meandered in all sorts of directions, as it usually did when he and I talked. It was always easy to talk to Neal, even if you were just meeting him for the first time. Anyone who knew him can attest to that sentiment as truth.

Just before we said goodbye, he asked if I was coming to the Asheville show. Obviously, I was. “Well, get hold of me and we’ll meet up,” he said, something we’d done before when he was in the area. I said I would.

But, I ended up running late to the sold-out show at The Grey Eagle, the crowd so massive and jam-packed that I was unable to get near the stage to signal to him I was there.

I watched him smile in the midst of melodic chaos from both sides of the microphone. He was so calm in this sweaty, raucous room, as if to be standing alone in the eye of the storm. It was pretty magical, especially during “On My Mind.” I stayed for one set and headed back home before it got too late.

Alas, it is what it is. And I’m so damn grateful for my time and conversations with him. Neal Casal was not only a guitar icon of our scene, he was also an incredible songwriter and a beautiful human being.

Track down his music, get to know the person and the artist — it’s an endless journey of discovery through music and emotion.

3 The Concerts on the Creek summer music series will conclude for the year with The Maggie Valley Band (Americana) at 7 p.m. Friday, Aug. 30, at Bridge Park in Sylva.