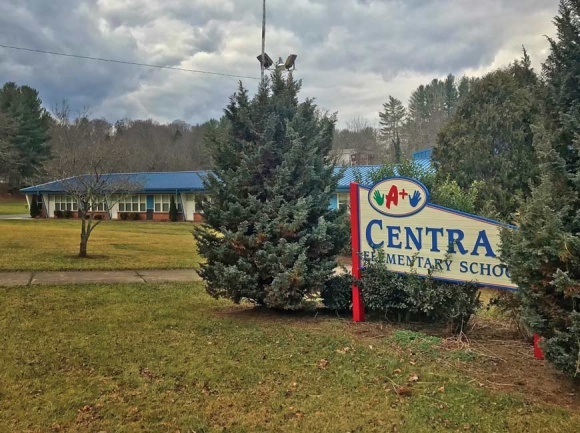 A proposal to consolidate several aging Haywood County Schools administrative buildings into a single multi-million dollar state-of-the-art facility first discussed months ago has suddenly taken on an unanticipated but not unwelcome urgency.

Back in February, Haywood County Schools Superintendent Dr. Bill Nolte presented commissioners with his assessment of HCS’ long-term facility needs in a county budget workshop. The price? $39.1 million down the road, or $12.6 million soon.

“This is not a budget request for this year. Unless you want to,” Nolte joked at the time.

Now, barely a week after it was learned that the Historic Haywood Hospital — current home of HCS’ administrative offices — had after three previous attempts qualified for tax credits that will now make private redevelopment imminent, Nolte and Associate Superintendent Dr. Trevor Putnam are again hanging the ambitious pitch before Haywood County Commissioners.

“We knew at some point in time there would be an opportunity for us to move, and it looks like that’s going to happen two Decembers from now,” Nolte told the board Aug. 19. “Our plan is not really about two Decembers from now, but from an infrastructure standpoint, what’s the most efficient way not only in terms of cost but in terms of operations, to work on old failing infrastructure?”

Recent trends, per Putnam, suggest that the shuttered Central Elementary School will likely be needed as an elementary school again soon, thanks to a number of apartment complexes in the works, a new classroom size rule and declining enrollment at the county’s public charter school, Shining Rock Classical Academy.

It would also preserve Central Elementary for instructional use, free up instructional space in several other buildings and open up several school-owned properties for disposal.

Consolidation, according to Putnam’s presentation, would lower upkeep costs, enhance the efficiency of training sessions and serve as a recruiting and retention tool for teachers without really increasing the square footage of existing, far-flung buildings.

During both the most recent and the February presentations, Nolte said he had no preconceived notions as to where the ECS might eventually be located, but said it would probably take about 5 or 6 usable acres, and it should be centrally located in the county, near major roadways and/or Interstate 40.

Another need on the distant horizon — but not included in the ECS proposal to commissioners — is a 40,000-square-foot maintenance and transportation facility that would also require 5 or 6 acres.

With many of the perceived pieces already in place and the financial and human capital efficiencies clearly outlined in the proposal, the real questions now are what, if anything, commissioners are willing to pay for such a facility, and how they might do it.

As of the February presentation, the county’s annual budget was on the order of $90 million a year, and county debt was at $46 million and declining. Commissioners on the first-ever Republican-majority Haywood County Board pressed for a tax cut in this year’s budget but couldn’t quite get there, though they may soon.

For the next three years through fiscal year 2023, the county will pay an average of $5.36 million a year towards debt.

At that pace, the county would be totally debt-free in 2030, so long as it incurs no further debt along the way.

There’s also the estimated $80,000 a year the county no longer has to spend on maintaining the Historic Haywood Hospital — expected to become affordable housing for veterans and the elderly — as well as any revenue realized if the other surplus buildings are indeed sold and then rejoin the ad valorem tax rolls.

The Crabtree property is two separate parcels totaling 5.9 acres, assessed at $1.19 million, although much of that value is in the 1937 former schoolhouse that would likely need extensive renovations or demolition and therefore command a lower market price.

The Hazelwood property is one large parcel that surrounds the Folkmoot Friendship Center to the north, west and south and encompasses nine acres, including several buildings used by HCS. It’s valued at $1.02 million, but has several different buildings valued at $750,000 which, again, could command a lower market price.

The Central Haywood High School Gym was demolished after structural deficiencies were noted in 2018, but the 12.2-acre parcel it shares with the high school is valued at more than $3 million. The former site of the gym is the bulk of the acreage, but if separated from the school wouldn’t be the bulk of the value, by far.

Commissioners responded to Putnam’s presentation with less reticence than in February, but with more vigilance, peppering Putnam and Nolte with questions based largely on cost.

Democratic Commissioner Kirk Kirkpatrick, who voted against the $3.2 million county animal shelter in 2016 — it passed anyway — noted that although ridding the county of Crabtree, Hazelwood and the old hospital would certainly save in operating costs and maintenance, the new building’s operating costs and maintenance would eat into that savings to an undetermined degree.

Kirkpatrick also wanted to know how much teacher support existed for the project.

Commissioner Mark Pless was silent, but in February raised serious questions about the total cost.

Likewise Commissioner Tommy Long asked if the $294 per square foot cost of the building was a solid number, or mutable.

To answer these questions and others, Commission Chair and Republican Kevin Ensley — who voted for the animal shelter — suggested County Manager Bryant Morehead establish an ad-hoc committee to study the issue.

“This is a big project,” said Morehead in response. “We’re probably going to need to get together with school staff fairly quickly to start talking about the logistics of site selection and alternative buildings, things like that.”

Joining Morehead in the study group will be Development Services Director Kris Boyd, Nolte, Putnam and representatives from the county’s finance office, who would all start brainstorming about possibilities.

After the meeting, Nolte said he was encouraged by the commissioners’ responses and looks forward, at the very least, to figuring out what to do with central administration two Decembers from now.

“It’s less expensive and much more efficient to do it the right way now then to fix it piecemeal over the next decade,” he said. “It does cost money and those are big numbers and I’m a taxpayer and I understand it, but it will save us more money over the next 10 to 15 years.”

HCS Board Chair Chuck Francis — who was joined by almost the entire elected school board at the meeting in a show of support for the plan — had just one message for taxpayers who will be called upon to weigh in on such a project, should it proceed any further.

“The efficiency of the whole school system is going to improve with this facility,” said Francis. “Teacher retention, professional development, staff training, all of it.”

Data released in September 2018 showed that Haywood County Schools slipped slightly in state rankings during the 2017-18 school year, dropping to the 14th-best public school system of the state’s 115 districts. The previous two school years, 2015-16 and 2016-17, HCS was 11th out of 115, earning a place in the top ten percent of all N.C. districts. Data for the 2018-19 school year is expected in the coming weeks.

• Private developers expected to exercise their option on the property by Sept. 15 after qualifying for redevelopment tax credits earlier this month.

• Convert the current boardroom to gym.

• Vacate and possibly dispose of property.

• Vacate and possibly dispose of property.

• Maintain as an elementary school option for anticipated growth in student population.