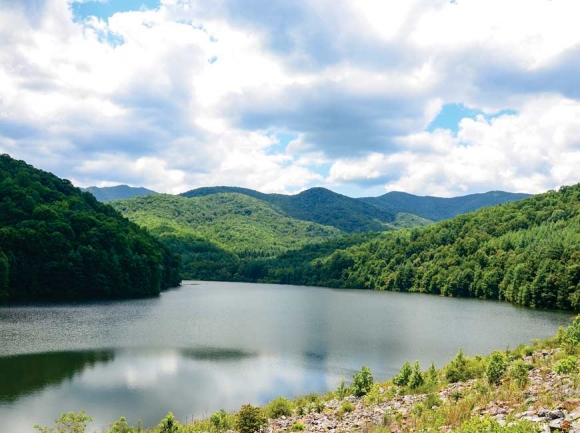 Nearly four decades ago, vast swathes of the 8,600-acre Waynesville watershed were laid bare, the trees timbered for profit and the soil harvested to build the earth-filled dam now holding back the reservoir.

Fast forward to 2019, and the landscape has changed dramatically. There is no more bare soil, and no more open canopy. It’s a full-grown forest, sunlight filtering through a green canopy below which the only sounds are those produced by the birds, insects and wind. The white pines planted to stabilize the stripped soil have thrived, perhaps too much. In 2014, a good many of them were cut down during a thinning conducted on a 50-acre portion of the property, as the seedlings were planted too close together to serve them well as they grew larger. But white pine is still a common species in the 8,600-acre watershed.

“White pine is a native species in this region. White pine plantations are not a native community,” Peter Bates, Ph.D., a natural resources professor at Western Carolina University, told a group of land trust, N.C. Forest Service, Town of Waynesville and land management representatives on a July 25 tour of the property.

He’d organized the tour to provide a review of what his nonprofit, Forest Stewards, has been up to over the last 10 years and what management actions the group hopes to see happen in the watershed in the years ahead.

An eye on quality

Bates has been involved with the Waynesville watershed since 2002, when the town contracted with a group then known as the Western Carolina Forest Sustainability Initiative to develop a strategic forest management plan for the property. After a conservation easement for the land was adopted in 2005, the town contracted with the group once more to develop a full forest management plan for the property. The nonprofit Forest Stewards, of which Bates is the interim executive director, was created in 2008 and has continued working with the town ever since.

Much of Forest Stewards’ activity over the past decade has involved monitoring. Lots and lots of monitoring.

One of the first things Forest Stewards did upon taking on the project was to establish 202 one-tenth-acre monitoring plots throughout the watershed, in which every tree was mapped and measured. The idea is to remeasure those plots once every 10 years in order to get a data-driven look at how the forest has changed over time. The first remeasurement began last year and is still underway, so there’s no data available yet.

“Our stewardship goal is to increase the diversity that exists in these forests,” said Bates.

Since the land’s primary purpose, from the town’s point of view, is to provide clean drinking water for Waynesville residents, close water quality monitoring has also been a priority.

“We monitor water quality at eight different points in the watershed. This is probably one of the most instrumented watersheds in Western North Carolina,” said Jerry Miller, Ph.D., a natural resources professor at WCU who has been monitoring the property since 2008. “We have over 1,200 suspended sediment samples that have been collected over that time period and we literally have hundreds of thousands of turbidity measurements.”

Those samples together deliver a clear message about the state of the town’s water supply. 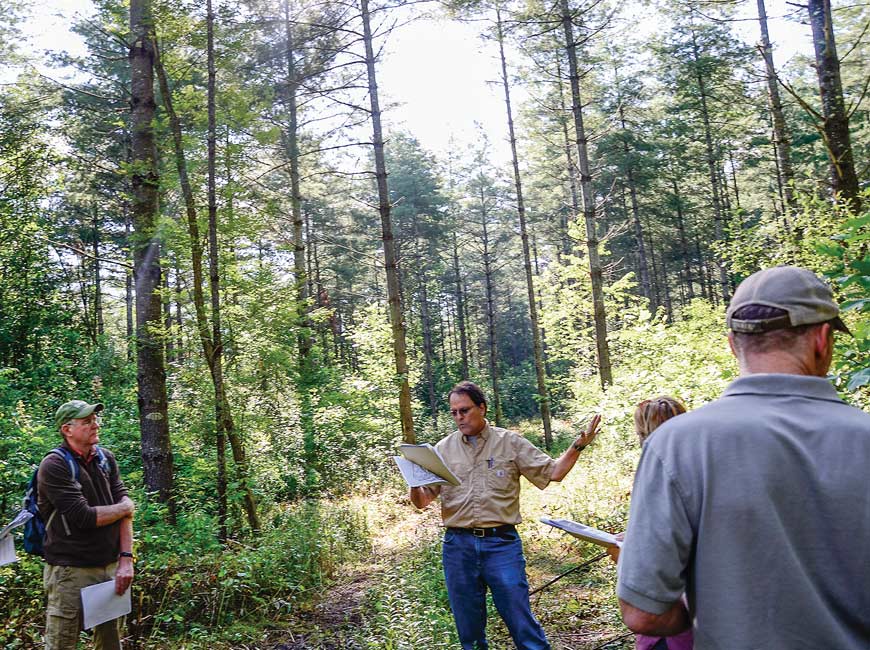 With 10 years of management and monitoring under its belt, Forest Stewards is now looking further to the future, working to come up with management solutions that will guarantee vital species diversity in the decades ahead while also preserving that exceedingly high water quality.

Since the Ice Age ended, forest fires have been an integral part of Southern Appalachian ecosystems, with one or two fires per decade common on dry sites. But fire suppression policies in the 1900s led to a pair of effects — the decline of fire-adapted species like oaks and hickories, and the loading of forest floors with fuels just waiting to ignite.

Multiple Forest Stewards’ recommendations hinge on bolstering populations of those fire-dependent species, which are valuable economically as well as ecologically. Oaks and hickories are both vigorous nut producers, feeding everything from bears to chipmunks to an army of invertebrates.

According to Bates, if the town wants to reap the benefits of prescribed burning, the time is now.

“We’re losing the oaks,” he said. “We lose those in the understory — they don’t regenerate. But we still have those species in the overstory. That’s important because that’s our regeneration source.”

The N.C. Forest Service has a program funded by the federal government that allows it to conduct prescribed burning on non-federal lands that are within 10 air miles of the national forest, at no cost to the landowner, said Matthew Hooper, an N.C.  Forest Service representative who was on the tour.

“It looks very manageable,” Hooper said of the project. “We would start very small, maybe 15 to 20 acres.”

Burn proposals are due in the fall of each year, with approvals delivered in December and burns typically conducted in early spring. If the town wished to apply for the program, said Hooper, the burn could be done as early as spring 2020. Though, Bates added, the likelihood of it actually going that quickly is low. A frequent cause of delay is weather that ends up not cooperating on the appointed day. Once a burn is approved, the Forest Service has up to five years to carry it out.

Even after the burn is done, the effort won’t be over. Restoring an area through prescribed burning requires repeated treatments, delivered in multiple rounds spaced five to seven years apart. A map of the watershed property highlighting fire-adapted areas includes more than 1,000 acres — while it’s unlikely it will all end up getting treated, it’s clear that there is plenty of potential. 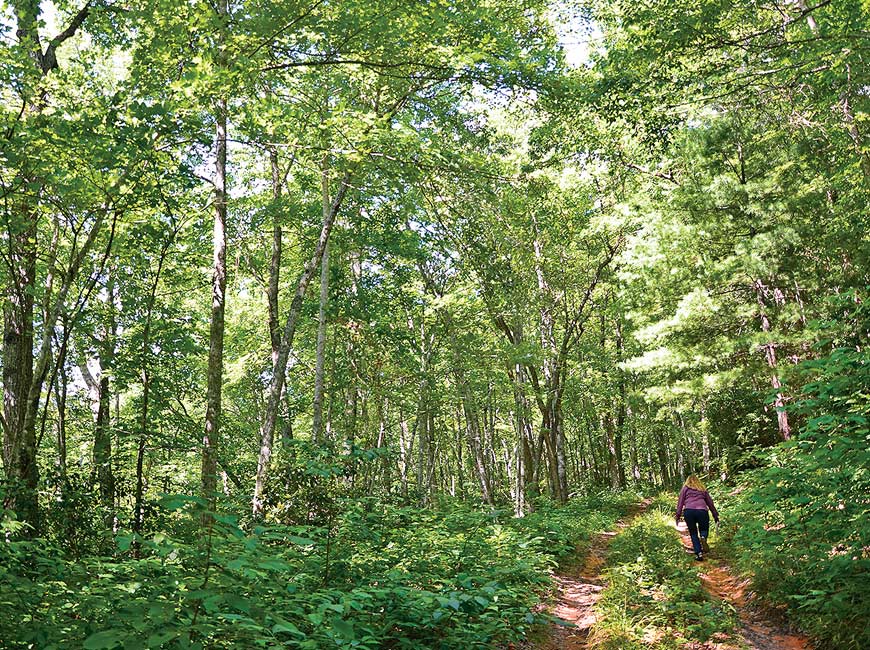 Forest Stewards hopes to conduct prescribed burns on areas like this to remove combustible understory growth and encourage regeneration of fire-adapted species like oaks and hickories.

Another tactic Forest Stewards proposes to encourage oak and hickory regeneration is called crop release. Some areas of the watershed have high-quality, though modest-sized, oak and hickory trees that would stand a good chance to becoming large, valuable trees if the small trees growing around them were cleared out.

In other areas, these species would be best encouraged by conducting a shelterwood cut — that is, logging out most trees except for the large oaks and hickories that can then remain to seed in the understory free of competition. The treatments would start small, with acreage increasing if successful.

A key component of Forest Stewards’ proposal is that no new roads be built through the watershed, but that the existing roads get some much-needed maintenance. The current road system was laid out in the 1940s and 50s by the Coweeta Hydrologic Laboratory as part of its focus on how to develop a good mountain road without degrading water quality. The system was then extended in the 1980s.

The roads have held up well, and are key to the watershed’s accessibility for management, said Bates. But the town should plan to grade the surface, fix any collapsed culverts and perform any necessary repairs at intersections with streams. Forest Stewards also recommends “daylighting” the roads — that is, cutting trees along the corridor so more sunlight will hit the roads, keeping them drier and in more stable condition.

It’s been long enough since that was done that some larger, valuable trees would be harvested in the process.

“Managing this forest is never about money,” said Bates. “Yeah, there’s a lot of dollars of some timber in this watershed. Historically managing timber for money was important for the town, but those days are past. Water quality is the key.”

But good land management comes with a price tag. The town’s contract with Forest Stewards is currently $42,000 for the year, with the board scheduled to vote on a renewal for the same dollar amount at its meeting Tuesday, Aug. 13, after The Smoky Mountain News’ press time.