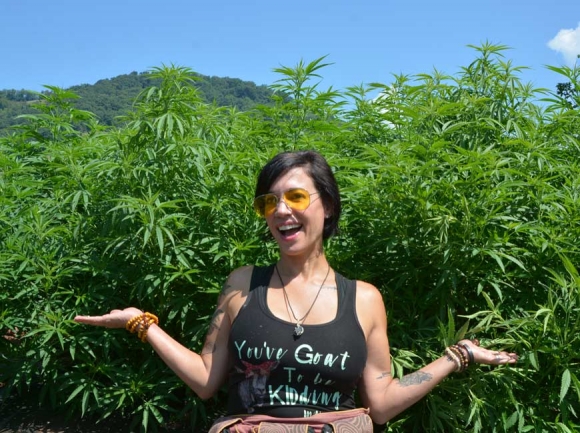 That empty black and white building on the corner of Branner Avenue and Depot Street is about to be filled — with a touch of green.

“Knowing what this plant can do in all applications, we’re creating a place where we can gather the community and educate them so it’s not a scary thing,” said Nicole Mescia, owner of Gaia Arise Farm and one of the few Haywood County cultivators of a very special crop that up until recently had been illegal to grow for decades.

In 2015, the North Carolina General Assembly created the regulatory structure for a pilot program that would allow hemp cultivation in accordance with newly-relaxed federal laws. After a series of modifications, hemp cultivation in N.C. has finally become both agriculturally and economically attractive.

Mescia’s been growing high-quality hemp on her farm for more than a year now, and is finally ready to bring an array of locally produced hemp products to a retail setting in downtown Waynesville.

Bassett will continue crafting his artisanal creations for Gaia Arise Farm Apothecary, which is currently scheduled to open this Saturday, Aug. 3.

“We’ll have a full line of skin care products, soaps, and a lotion bar where you can create your own lotions, body washes and shampoos infused with essential oils,” he said.

Products sold at the Apothecary will utilize hemp grown locally, at Mescia’s farm.

“A lot of people outsource that, but we have our arms around the whole process,” she said. “It’s a passion of all of ours — purity and high quality.”

Some of those concoctions could include CBD, an oil made from hemp plants that purports to treat a variety of ailments both topically and by ingestion. Although formal medical studies haven’t yet confirmed many of the specific benefits touted by CBD producers, anecdotal evidence abounds.

But so does confusion — since hemp is the same plant that produces marijuana, many people have trouble distinguishing between the two. Mescia, though, says there’s no funny business going on at Gaia Arise Farm, and said she has had enough visits from law enforcement to prove it.

“They come out, they take a sample, and they test it,” she said. Legal hemp must contain less than three-tenths of one percent THC, the intoxicating chemical that gives pot smokers that “high.”

Gaia Arise Farm grower Greg Shelton said he enjoys a good relationship with inspectors, even if it is a long-distance one.

“They’ll fly overhead and check your farm out,” Shelton laughed. “We wave at them and they wave back. It makes us feel protected.”

In addition to offering a variety of local organic produce including eggs and honey, the Apothecary will also feature donation-based consultations and educational seminars by Dr. Todd Stone, a proponent of plant-based medicines like that which can be made from hemp and thereby provide an alternative to pharmaceuticals that often carry a big downside.

“We just want to gently expose to people to the fact that there are so many other tools out there than what we normally focused on,” said Mescia. “If we can get a little bit of that into people’s lives, it will benefit them.”