The pulse of the community: Local pediatrician retires 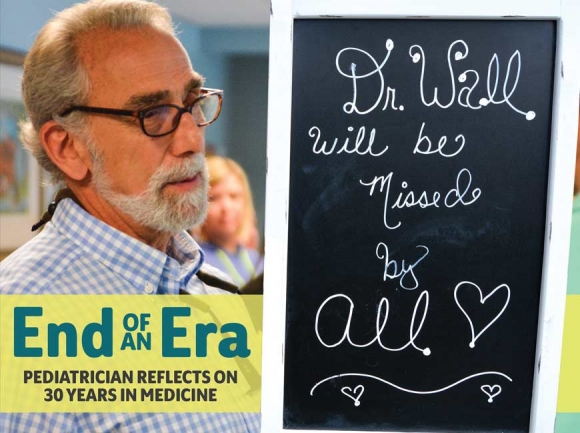 Dr. Stephen Wall couldn’t have come to Waynesville at a better time.

“There were four pediatricians in Haywood County, and three of them retired all at the same time,” said Wall. “So Dr. Bob Earnest recruited me and another guy, Dr. Garnet Maharajh, to join Haywood Pediatrics, which he started two years prior, in 1987.”

Wall and his wife had visited the area before and like many, fell in love with the mountains, but it was something else altogether that compelled them to become part of the community.

Over those 30 years as a practicing pediatrician in rural Western North Carolina, Wall estimates he’s conducted upwards of 140,000 patient visits, meaning he’s watched generations of this community grow up and have kids of their own.

Even though he’s now officially retired, Wall’s finger remains on the pulse of the community, guided by a unique perspective on what’s changed since he got here, and where things are going over the next 30 years.

Wall took an unorthodox route not typical of most pediatricians, to say the least. Born and raised in New York City, he was an English major at tiny Union College in Schenectady until he dropped out in the late 1960s to become a union organizer.

“I was an autoworker and a steelworker for seven years,” he said. “Not a summer job.”

Wall’s union work introduced him to occupational health safety, which led him to collaborate with physicians.

“I got really involved with a very progressive group of doctors in Detroit who were doing cancer research,” he said. “But I got laid off, and we published some good articles in different journals, so I decided to become a doctor.”

He went back to school, finished his degree and took all the pre-med courses he needed to apply to medical school, and was ultimately accepted to the University of Texas.

“I was really interested in occupational medicine,” said Wall. “I thought I would do that.”

That all changed for Wall as he was exposed to other aspects of medicine.

Wall went on to work at the prestigious MD Anderson Cancer Center in Houston, and soon fell under the tutelage of an influential figure.

“I got to work with some of the great cancer specialists in children — Dr. Donald Pinkel, who’s the man really attributed with curing leukemia in children,” said Wall. “Of the hundreds of thousands of children who’ve been cured of leukemia, he started it all, and he was my mentor. That was a tremendous honor.”

But after seven years there, Wall and his young family were growing tired of the urban life, and had spent more and more time camping in the mountains of New Mexico. When the opportunity in Haywood County presented itself in 1989, Wall joined Dr. Earnest’s practice, where he’d remain for 30 of the most consequential years in the history of medicine.

“When I trained, we worried about things like meningitis,” he said. “The biggest issue in recent years of course is the dreadful drug epidemic, which may have started with crack cocaine and methamphetamines but is now opioids. We see it in our practice. We’ve had little babies born addicted to opiates, we have to keep them on methadone, microdoses of methadone, for months.”

The opioid epidemic is also creating an entire generation of children raised by grandparents, distant relatives or the state.

“We see many, many children who are in custody of the Department of Social Services, because they were taken away from a parent who’s addicted, negligent, in jail or dead,” said Wall. “That’s been the biggest change, for me.”

Another big difference is the long-simmering, headline-grabbing debate over health care coverage, which Wall says has come a long way, but still not gone far enough.

“When I first got here, people really scrambled to get medical care for their kids,” he said. “We had a free clinic at the health department that Dr. Earnest and I used to do, I think every Tuesday morning, because there were a lot of people who couldn’t afford healthcare and made a little too much money to qualify for Medicaid. They were really trapped.” Although Dr. Wall has now retired, other physicians will continue to practice at Haywood Pediatrics. Cory Vaillancourt photo

Wall became involved with the statewide committee for Carolina Access, the state’s first managed care effort and one of the first in the country.

“That really became a tremendous model for expanding access and services to people, and really helped control the cost of Medicaid through controlling access to the emergency room, because having practices more open and available stopped people from rushing off to the emergency room for fairly minor things,” he said.

In the 1990s, that transitioned to the S-CHIP program, which is called Health Choice in North Carolina.

“We have hundreds of families who make too much money to be on Medicaid,” he said. “Mom and dad are working, one or two jobs each, or have a family business or farm, and they can’t afford the $2,000 a month to get a good Blue Cross policy for their family. It’s been a godsend.”

Wall’s been a vocal supporter of Medicaid expansion, something that he thinks is now all the more critical, given how the local economy has changed over the past 30 years.

“Previously, a lot of people had union contracts, whether it was Lea Industries or Wellco, but as we become more of a tourist-oriented region with more service workers, my impression is that we see a lot more parents with medical conditions who aren’t getting treated,” he said. “That has a huge impression on the kids. I see these teenagers who are having anxiety attacks about their mother’s diabetes.”

Despite his retirement from practicing medicine — and a desire to travel — Wall said he’ll remain active in local issues related to children’s health, especially on bullying.

“I think being involved in preventing community violence is something I’ll be doing a lot of,” he said.