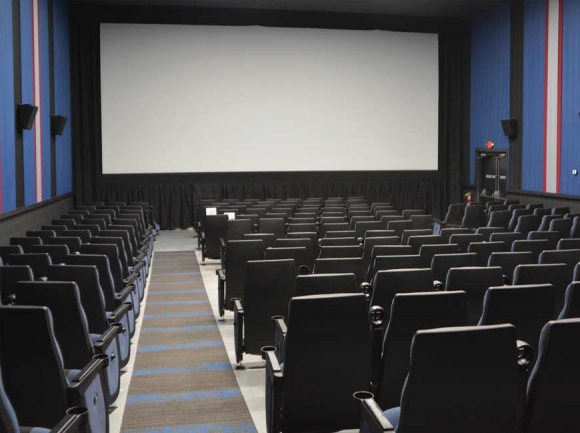 Originally (and currently) from Asheville, Israel, whose worked in the movie industry for most of his life, was looking for a local project to launch. He wanted to find a small town in Western North Carolina with a former theater building that could once again open its doors.

“In 2014, when the big studios went digital, all the little guys were forced to go digital. A lot of them couldn’t afford it. It was an expensive process. And a lot of them closed them. They’ve been torn down since or converted into something else. There’s not a lot left,” Israel said. “And when Waynesville lost this theater in 2014, it lost a part of itself — a part of its heart, essentially. This one I love because it’s near my home and I love Waynesville. This is a complete from the ground up rebuild, which is unusual.”

For its grand reopening screening, the Smoky Mountain Cinema will play “Spider-Man: Far From Home” in all three auditoriums. After that? First-run films and whatever else the market may demand.

And though The Stand at 38 Main in downtown Waynesville has been showing first-run films in recent years, The Strand itself is looking forward to sliding back to its original roots of showing arthouse and classic films amid a semi-regular schedule of live music.

In terms of Smoky Mountain Cinema’s role in the community, Israel really wants to hone in on the idea of the small-town theater and how it brings all types of social circles together.

“You grow up in a small town — or any town really — as a kid and the movie theater is a central part of life. You go in and see the movies, and it’s like magic,” Israel said. “As a teenager, it’s a place to hangout. And as you get older and have kids of your own, you bring them to the theater — it’s what makes up a town.” When asked about the possible challenges of running a small-town theater in the 21st century landscape of digital online streaming services, Israel will be the first to dismiss the notion.

“You hear year-after-year that there’s always something that’s going to kill the theater — Netflix and streaming, before that it was DVDs, before that it was VHS tapes,” Israel noted. “But, the box office and movie industry had its biggest year ever last year — you’re never going to replace the social value of going to the movies.”

When he was a kid, Israel said his family “wasn’t poor, but didn’t have a lot of spare money.”

“And I never went to the movies with my parents. I have a big extended family, tons of cousins, aunts and uncles, and I’d always go to the movies with them,” Israel said. “So, to me, when I got my job with the theater, it was a really a way to do something I’ve never been able to do.”

Reflecting on his past in the movie industry, Israel has worked for an array of big-time companies, from AMC to Regal and Carmike to United Artists. He learned a lot from each entity, and aims to apply his knowledge and skill set to a more community-oriented interaction, not something at arm’s-length.

But, what’s kept Israel in the movie industry more than anything is simply the timeless splendor of imagination and discovery that’s unique to experiencing a film at your neighborhood theater.

“The reason I’ve stayed in the business all these years, is that I love it when a kid comes in for their first movie and they come out and you see that expression on their face,” Israel said. “They’ve literally seen magic. And if I’m having a bad day, and I see that kid, I perk up — because I always was that kid.”

Visit www.smokymountaincinema.com, email This email address is being protected from spambots. You need JavaScript enabled to view it. or find the business on Facebook at “Smoky Mountain Cinema.”