Closer now and you will see what I mean: Peter Noone of Herman’s Hermits 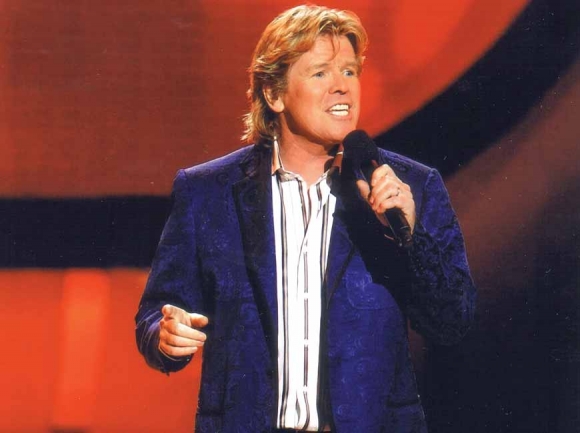 The history of rock-n-roll music is as wide and deep as an ocean, each drop of water a band, song or feeling radiating a sense of self into the endless universe.

And within that massive and undulating history, no wave was larger than that of the British Invasion in the 1960s. Sparked by The Beatles appearing on The Ed Sullivan Show Feb. 9, 1964, the musical charge “across the pond” from England to the United States included the likes of The Rolling Stones, The Yardbirds, The Who, The Dave Clark Five, The Animals, The Hollies, The Kinks, The Zombies and Herman’s Hermits.

Fronted by a teenage Peter Noone, Herman’s Hermits rose to prominence with a sugary sweet blend of pop and rock sensibilities, fusing themes of love and curiosity with elements of comedic brilliance.

It was a formula for success that led Herman’s Hermits to a slew of gold records and 11 Top 10 hits (“I’m Into Something Good,” “Wonderful World,” “There’s a Kind of Hush”) on the American charts, which included two No. 1 smashes: “Mrs. Brown, You’ve Got a Lovely Daughter” and “I’m Henry VIII, I Am.”

Now 71, Noone steps up to the microphone with as much excitement and passion as those many decades ago. While onstage, Noone taps into a fountain of youth that only resides within songs immortal, where well-earned wrinkles and ticking clocks seems to disappear into an evening of memories held high and in unison of the melodic moment itself.

Smoky Mountain News: Back in the early 1960s, it seemed that people looked at being a musician as a “novelty,” something you’ll do for a couple years and then get a “real job”…

Peter Noone: Well, it only works if it’s a hobby as well. I’m even a fan of airplanes. I went from trains to airplanes, and now I’m like a plane spotter. So, now when I get on a plane, it’s an exciting adventure. And you know, luckily for me, I have experience and I know that there are no two concerts that are the same, ever. We never do the same thing. It’s not planned, it’s because there isn’t a plan. And that’s the plan, not to have a plan — to work as much as you can, do the best job you can every gig, be respectful to everybody, then go home, have a bath, and get ready for the next one.

SMN: What do you remember most about those early days? The gate burst open with The Beatles, but what was England like for you at that time?

PN: You know, I don’t remember it being anything but fun. The Beatles grew up in the shadow of Elvis Presley and we grew up in the shadow of The Beatles. So, we never really took ourselves that seriously because we knew we were never going to be as good as The Beatles. So, I know what we’ll do — we won’t compete with them, we’ll do completely different types of songs. We’ll go the Buddy Holly & The Crickets way, and just find beautiful pop romantic songs. And, you know, throw in some comedy. And we always kept it like that.

SMN: In that time period following the Kennedy assassination (Nov. 22, 1963), it almost seemed serendipitous that this happy and uplifting music showed up in such a dark time in America…

PN: Most of the songs that we brought here were American remakes. And all we did was that we were more enthusiastic. You had your John F. Kennedy and we had World War II on our doorstep. Every single person in every band that was in the British Invasion was connected to somebody who fought in the Second World War. My father fought and my mother was sent to countryside because the place she lived was being bombed. So, of course there would be fun periods of music.

SMN: You’ve dedicated your life to music and live performance, what is it that still triggers something within you, that makes you excited and passionate about all this?

PN: I’m lucky that I like my songs and I get a kick out of singing my songs. And the audience knows them. When people say, “I can’t do anything else,” I’m like Keith Richards [of The Rolling Stones] in a way, that we don’t know what else to do except what we do. We just keep going until one day you’re singing “Can’t You Hear My Heartbeat” and you can’t. [Laughs].

Editor’s Note: If you would like to stream the entire audio of this conversation, go to YouTube and search “Peter Noone Garret K. Woodward.”

Iconic 1960s British pop/rock group Herman’s Hermits featuring Peter Noone will hit the stage at 7:30 p.m. Friday, June 28, at the Smoky Mountain Center for the Performing Arts in Franklin.

Herman’s Hermits was a hugely successful English beat band in the mid-1960s with hits including, “Mrs. Brown, You’ve Got a Lovely Daughter” “I’m Into Something Good” and “I’m Henry VIII, I Am.” They have sold over 60 million records and continue to consistently play to sold-out venues all over the world.

Tickets start at $25 each, with priority seating available. For more information and/or to purchase tickets, visit www.greatmountainmusic.com or call 866.273.4615.