Whole lotta highway (with a million miles to go): A conversation with Marty Stuart 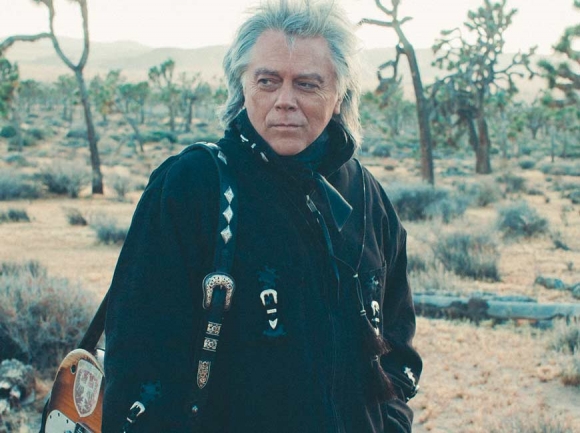 Hailing from the small rural town of Philadelphia, Mississippi, the legendary singer/musician took off for the open road at age 12, performing with various groups throughout the Southeast. By the time he was 14, he had secured a position in bluegrass forefather Lester Flatt’s band.

After Flatt’s passing in 1979, Stuart played alongside acoustic music icons Vassar Clements (fiddle) and Doc Watson (guitar), only to then land in Johnny Cash’s backing band. By the late 1980s, Stuart himself became a popular country star with hits of his own.

But, Stuart never did stray too far from the beloved traditional county and bluegrass music of his youth, something he’s circled back to in recent decades as his trademark hair has slowly transitioned from black to silver.

In recent years, Stuart has turned a lifelong dream into a reality. Known as the Congress of County Music, Stuart broke ground this spring on the museum in his native Philadelphia. In it will be not only his legacy as an artist and performer, but also a mindboggling collection of county and bluegrass memorabilia from his extensive travels.

And through it all, Stuart remains — a musical star and, more importantly, a man truly humbled by the life he’s been able to live.

He’s always maintained that to find longevity in the music industry, you need to “stay close to the source,” meaning those who came before you — either remembered by you and me or simply forgotten by time itself, but all forever cherished within songs immortal.

Smoky Mountain News: Is this museum a culmination of everything for you?

Marty Stuart: Yeah. I call it my “Hillbilly Presidential Library.” It’s a cultural center, a museum, performance center, and the subtitle of not only my 40-something years of traveling, but pretty much the entire culture of traditional country music. It’s probably the largest private collection in the world. I think 20,000 [or more items]. It’s crazy. I’ve got the insurance bill to prove it. [Laughs].

It started in my bedroom as a kid, then my mom and dad’s house, then a little warehouse, then three warehouses, and now it’s becoming a cultural center. I always saw the importance of those treasures in my mind. When I was a kid in Lester Flatt’s band, when they’d throw away their ties, I’d say, “Can I have that?” or a set list or guitar picks. It was a pure love of that music and those people — the master architects of it.

SMN: How big is Philadelphia, Mississippi?

MS: I think the county is about 30,000 or 40,000 people now. But, this thing that’s important to me about Mississippi, when you drive across the state line, it says, “Welcome to Mississippi — The Birthplace of America’s Music.” And you and I both know everything that’s come from there — it’s staggering.

In the north part of the state, you have the spiritual home of rock-n-roll, which is Elvis’ birthplace in Tupelo. Across the way in the delta, you have the Delta Blues Museum in Clarksdale and the B.B. King Museum. Down in the central state, where I’m from, is Meridian, and that’s where they just put in this $65 million Mississippi Arts & Entertainment Experience, and the little Jimmie Rodgers Museum is down there. So, the spiritual home of country music will be Philadelphia, Mississippi, and the Congress of Country Music.

SMN: What do you think about the road from being that kid in that bedroom in Philadelphia to where you are today?

MS: It’s crazy, because the first two records I ever owned in my life was a Flatt & Scruggs record and a Johnny Cash record. The only two jobs I ever had in my life was with Lester Flatt and Johnny Cash. And the girl that I love and married is [country singer] Connie Smith, who came to my hometown when I was 11. It kind of all came to me, then I went out and got it, and made a full circle back home with it.

MS: Numbers don’t apply. I could care less about the number, just so long as I feel good. I mean, every guitar I got is older than me. But, it’s about feeling good and it’s about having hope. If I have something in front of me that knows more about me than I know about it — which I try to keep all the projects I can that do that — then I’m fine. You know, all of my friends are lifers. Merle Haggard told me one time, “You’re a lifer, takes one to know one.” Where are we going to go? [Laughs].

Editor’s Note: If you would like to listen to the entire audio of this conversation, go to YouTube and search: “Marty Stuart Garret K. Woodward”

Country and bluegrass musical icon Marty Stuart & His Fabulous Superlatives will perform at 7:30 p.m. Saturday, June 1, at the Smoky Mountain Center for the Performing Arts in Franklin. Tickets start at $28 per person. For more information and/or to purchase tickets, call 866.273.4615 or click on www.greatmountainmusic.com.