This must be the place: Out here in the fields, I fight for my meals 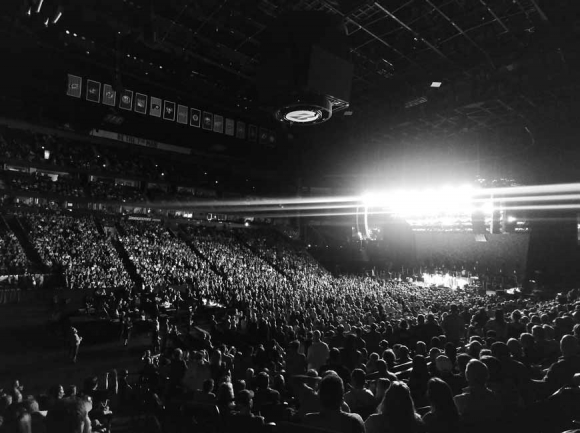 The Who at Bridgestone Arena. (photo: Garret K. Woodward)

Sitting high up in the Bridgestone Arena in downtown Nashville last Thursday night, I couldn’t help but wonder what my Uncle Scott would think about all of this.

There they were, right there onstage: The Who. Well, at least what’s left of the legendary rock group, which is lead singer Roger Daltrey and guitarist Pete Townshend.

Members of rock-n-roll royalty, the duo was backed by several musicians and an entire orchestra, all of which plowing through hit after iconic hit of the band’s catalog dating back over a half-century. It was surreal, more so wondrous, to see an act I’ve only heard through headphones or radiating from my car stereo (and always cranked loudly) my entire life.

Sadly, Uncle Scott passed away unexpectedly at age 60 in April 2016 of a heart attack. An all-around rock-n-roll freak myself, with a sincere lifelong love for The Who, my uncle and I connected over the band’s albums, over a mutual love of running and athletics, and over participating in rollicking political debates at family gatherings.

And when I gave the eulogy at his funeral, I spoke of my uncle’s love for The Who, and how he passed that passion down to me — as a teenager and as an adult.

Uncle Scott pushed me to work hard, even when I thought he was being a hard ass, just like his brother (my father) was also like toward me. You realize as you get older, they weren’t being assholes — they cared about you, and wanted the best for you. My uncle had my back. He would always be in my corner.

After years of being one of the most successful track/cross-country coaches in my native Upstate New York, Uncle Scott became a field judge, where he would shoot the gun to start a track race or judge a call if there was an issue.

Well, I was a senior in high school in 2003. Captain of my team. First race of the year. Freezing cold out. North Country weather, eh? I was up against the best mile runner in our conference. He hadn’t been beat all year. Uncle Scott fired the starting gun. I went toe-to-toe with this kid, beating him literally at the finish line. He crossed at 04:49. I passed him at 04:48.

Uncle Scott jogged over, “Jesus, you did it. You finally ran your ass off. Dammit. Wow.” His praise meant the world, seeing as, in my family, that kind of praise only came with the real deal nitty gritty achievements. We ended up going undefeated that season, onward to the state championships.

When I got my high school diploma later that year, I had a graduation party in my hometown of Rouses Point, New York. Uncle Scott showed up and handed me his gift. It was a copy of The Who’s 1971 seminal album “Who’s Next.”

As I looked at the album, he said to me, “Here, this got me through a lot of tough times. I always would listen to ‘Baba O’Riley’ to get pumped up about a game I was about to play or life in general. Hope it can do the same for you.”

And you know what’s absolutely wild? A few years later, my Uncle Scott (a lifelong bachelor) met, dated and married my Aunt Sally when he was 50. With “Baba O’Riley” always being “his song” since he was in high school, let’s take a moment to recite those lyrics: “Sally take my hand / We’ll travel south cross land / Put out the fire / And don’t look past my shoulder / The exodus is here / The happy ones are near / Let’s get together, before we get much older...” A decade after their wedding, those lyrics were printed on his funeral card.

During the Nashville gig, The Who rolled into the famous instrumentation that is “Sparks,” a melody that really filled my soul in the fall of 2005. A college junior, I was attending a semester abroad in Ireland. And one weekend we all went to London for a few days. I had just purchased The Who’s 1970 album, “Live at Leeds,” and had been blasting it nonstop in my handheld CD player (remember those?).

Well, one afternoon, while in the heart of London, I went for a walk by myself into Hyde Park. Sunshine. Lush greenery. The skyline of London surrounding me. All that history, art, culture and society. And I remember when “Sparks” spilled into my headphones, especially the 03:17 part, it shook my body into a state of pure melodic euphoria. It’s a feeling that still awakens within me whenever I blast that tune or The Who in general.

While in Nashville for the show, I ended up with two press tickets for The Who at Bridgestone Arena. And I had nobody around to claim the other pass. All of my Nashville friends either already had tickets or other plans that evening.

I want to think that empty seat that evening was filled with the spirit of my late uncle. And it was. Rock on, Uncle Scott.

1 An award-winning bluegrass band with gospel, folk, and country music influences, Dailey & Vincent will hit the stage at 7:30 p.m. Saturday, May 25, at the Smoky Mountain Center for the Performing Arts in Franklin.

2 The 10th season of the Concerts on the Creek summer music series will kick off with Daddy Rabbit (blues/rock) at 7 p.m. Friday, May 24, at Bridge Park in Sylva.