This must be the place: You’ve got to trust your instinct and let go of regret 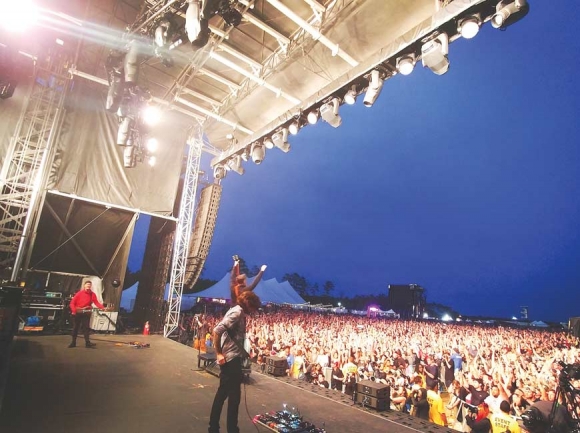 With the wind howling in my face, the Polaris ATV rounded the third curve of the Rockingham Speedway. The odometer read 60 mph. It was midnight. Sunday into Monday. And all I could think of was the absurdity of this serendipitous moment.

This past Sunday was the culmination of the Epicenter rock festival. Held just across the street from the legendary (now abandoned) NASCAR track at the Rockingham Dragway, the event attracted tens of thousands of rock-n-roll freaks with a lineup that included Foo Fighters, 311, Korn, Rob Zombie, and dozens more of the biggest acts on the planet.

And last Friday, I hadn’t planned on going. Not at all. Wasn’t even on my radar as a possibility. But, a dear friend of mine, someone deeply connected in the music and craft beer worlds, called me up just as I was about to be a recluse for the weekend.

“Hey, what are you doing Sunday?” he asked. Within a minute, I’d been convinced to bail on all my original plans, jump into my truck Saturday afternoon and take off to Charlotte to meet him, only to roll into Rockingham for Epicenter on Sunday. He had to head to the speedway for some business endeavors. So, why not go along for the ride, eh? Sold.

In my old busted up Toyota Tacoma, I soon found myself at the valet in the Omni Hotel in downtown Charlotte. Parked next to a Bentley and a McLaren, I stood out like a sore thumb, especially with attire: plaid long sleeve, shorts and sneakers. No matter. Only need to stroll into the lobby with one’s head held high in confidence of the extravagant situation I’d just found myself in.

Once Saturday transitioned into Sunday, there I was, bellied up at the bar for way overpriced drinks in the Ritz-Carlton across from the Omni, rubbing shoulders with big business folks and music industry movers and shakers. And all the while, I’m well aware of the bizarre nature of little ole me in the midst of this monetary madness — be aware of it all, and jump right in.

Bleary-eyed come Sunday morning, we rode out to Rockingham. The major interstates soon became small highways only to then become country backroads. Once backstage at Epicenter, we were surrounded by rock star tour buses and massive stage productions. In passing, I’d been told around 80,000 tickets had been sold for the weekend festivities.

Besides my buddy and I, we were running around Epicenter with one of his business associates, who was also good friends with 311, one of the most successful rock bands in the modern era. As a teenager of the late 1990s, I was, and remain, a huge fan of 311 — a seamless blend of rock, hip-hop and reggae. It’s timeless music with a deep and sincere message about individuality through positivity.

Soon, the three of us find ourselves in the backstage trailer for 311 before the group’s headlining spot. In every direction stood musicians I’d respected and adored since middle school. I felt like a teenager all over again. But, not once in a nostalgic or fan boy way. More so in awe of the moment, that childlike wonder I’ve always aimed to retain as my beard gets greyer, the weeks, months and years ticking away.

Fast-forward to all of us side stage watching 311 tear through an hour-long set in front of tens of thousands of ecstatic music fans. I found myself thinking of all those years chipping away at finding stability in the music industry through the written word. And there I was, in that state of being where your soul feels refilled from years of exhaustion trying to get wherever it is you need to go to achieve your dreams.

After saying our goodbyes to the band, we crossed paths with one of the owners of Rockingham. We jumped on his golf cart and headed for the speedway. He took us through the old NASCAR offices and showed us all this long-forgotten racing memorabilia, and also the big plans he and his investors have for the property with the success of Epicenter.

“Y’all want to ride around the track?” he grinned at us. Yep. Hopping into the Polaris ATV, we roared around the racing bastion that is “Thunder Alley.” In the distance, you could see the bright lights of the Epicenter, the countless taillights of those thousands of rockers streaming out of the festival grounds and back into society.

By 2 a.m. Monday morning, our trio hit the road for Charlotte, for the Omni, and for the eventual 2.5-hour drive back to our homes in Western North Carolina. And I couldn’t help but smile in the beautiful madness of it all. This is what it’s all about — going with the flow, seizing that carp(e) everyone is always talking about.

1 The Jackson County Chamber of Commerce will present the third annual Hook, Line and Drinker Festival from 3 to 7 p.m. Saturday, May 18, at the Bridge Park Pavilion in Sylva.

2 Renowned bluegrass singer/mandolinist Sierra Hull will hit the stage for a special evening of acoustic music at 7 p.m. Saturday, May 18, at the Cowee School in Franklin.

3 Fines Creek Community Center will host an evening of dance and music with Running Wolf & The Renegades at 6 p.m. Saturday, May 18.

5 Pottery School’s Master Potter series continues with Joe Frank McKee from 9 a.m. to 5 p.m. Saturday, May 18, at the school in Franklin.