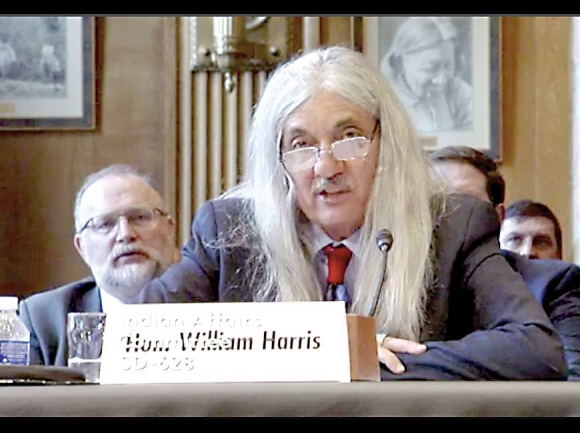 Political leaders in the Eastern Band of Cherokee Indians are optimistic following a recent congressional hearing on legislation that would pave the way for the Catawba Indian Nation to open a casino in Cleveland County’s Kings Mountain, an effort that the EBCI opposes.

“I think this is going to turn out alright,” Principal Chief Richard Sneed told Tribal Council Thursday, May 2. “We’re going to continue to press on this issue because it’s what’s right.”

Sneed and seven members of Tribal Council traveled to Washington, D.C., last week and visited the offices of all 13 members of the Senate Committee on Indian Affairs to speak against the bill in advance of the May 1 hearing.

The hearing, a video of which is posted at www.indian.senate.gov, lasted over an hour and dealt with two other bills in addition to S.790, which affects the casino issue.

Introduced by South Carolina Sen. Lindsay Graham, the bill is co-sponsored by North Carolina senators Thom Tillis and Richard Burr. It would authorize the Catawba — a federally recognized tribe with a reservation in South Carolina — to own a gaming facility on a 16.5-acre piece of land in North Carolina’s Cleveland County and authorize the Secretary of the Interior to take that land into trust for the tribe. The bill states that the facility would comply with the Indian Gaming Regulatory Act but be exempt from Section 20 of that law.

About 30 percent of the customers who visit Harrah’s Cherokee Casinos in Cherokee and Murphy live closer to Kings Mountain than to the Qualla Boundary, meaning that a new casino in Kings Mountain would likely hurt Harrah’s bottom line. The casino is an economic powerhouse in Western North Carolina, employing 5 percent of the far western counties’ workforce, forming the lion’s share of the tribe’s annual budget — which tops half a billion dollars — and providing revenue for the twice-yearly per capita disbursements tribal members receive.

Sneed has said that S.790 would unfairly create a special exemption from the rules, hurting Cherokee and WNC in the process. The Catawba, meanwhile, say the bill would merely clarify the Catawba tribe’s land rights in North Carolina, which Chief Bill Harris said were understood to exist when the tribe’s 1993 land claims agreement was drafted but were left unclear in the document’s actual language.

The tribes also disagree about the history of the land in question. Sneed said that the Cleveland County area is part of Cherokee’s aboriginal territory — an 1884 map in the Library of Congress showing the tribe’s former territorial limits includes what is now Cleveland County — but the Catawba contend that the area is their ancestral land, citing information on the Charlotte Museum of History’s website stating that the tribe settled in the Piedmont area 10,000 years ago.

“Our government has promised a bright future for the Catawba people, but they have been deprived of that future through a tortured legal process that has left them with little to show for giving up their land claims and treaty rights, and they did give it up,” Graham said as the May 1 Senate Committee on Indian Affairs hearing opened. “They didn’t get what we promised them in return. S.790 will right that wrong.”

In his testimony, Harris said that when the tribe’s land claims settlement agreement was reached in 1993, it was understood that the tribe would have rights as a “fully restored tribe” in North Carolina — among other understandings. A quarter-century later, the tribe’s land base is much smaller than promised, South Carolina has not allowed it to pursue gaming and policies surrounding educational opportunities for Catawba children have left the tribe deep in debt, he said.

“Obviously, we never (would) have agreed to this settlement with South Carolina if we knew it meant federally enforced poverty,” he said.

Under the bill, the proposed casino site in Cleveland County would be considered off-reservation gaming and a discretionary rather than a mandatory acquisition, said John Tahsuda, principal deputy assistant secretary of Indian Affairs.

“In general I would say that the department supports the equal application of laws to federally recognized tribes such as the Catawba Indian Nation,” said Tahsuda. “It’s clear that the benefits Congress intended for the tribe through the settlement act have not been realized and this has resulted in disparate treatment for this tribe as compared to other federally recognized tribes.”

Hoeven asked Harris why the tribe doesn’t pursue land in South Carolina instead of looking to North Carolina, and whether he had reached out to the EBCI to address their concerns.

Harris replied that, while there was gaming in South Carolina when the 1993 agreement was signed, South Carolina ended gaming afterward, which meant that the tribe could not pursue it either. The tribe has tried to change that, since South Carolina does allow gaming on boats in federal waters, but has been turned down twice by the state’s Supreme Court.

Harris also told the committee that he has spoken to the three most recent chiefs of the EBCI about a possible gaming partnership but that the tribe is “resistant” to the Catawba’s efforts.

Vice Chairman Sen. Tom Udall, of Nevada, asked about the ownership of the property. Harris said the tribe does not own the land but has power of attorney over it. Tahsuda said the ownership situation doesn’t affect the land-to-trust process.

“Why are we waiving Section 20?” she asked. “Why don’t we keep Section 20 in and let you go through your process?”

“In my opinion it would just add an additional administrative hurdle,” replied Tahsuda.

“Well every other tribe has to go through that hurdle, so why would we waive that for them, that’s what I’m trying to understand,” Cortez Masto replied. “What’s the distinction here? Why don’t we allow them to go through that process like everyone else, because we’re setting a bad precedent here. How many other tribes have we waived Section 20 for?”

In response, Tahsuda outlined the process that would be followed if Section 20 were not waived. In that case, he said, the Catawba would move forward by engaging N.C. Gov. Roy Cooper in the discussion and going through the two-part determination process laid out in the law. That process would begin with a decision on whether to take the land into trust and involve “extensive discussions with the local community” and consideration of the acquisition’s effect on property tax rolls and jurisdictional conflicts. Then, the Department of the Interior would complete a gambling analysis to determine if the land is appropriate for gaming — if the verdict was yes, the governor would have to agree before gaming could occur. The bill as written would allow the department to skip over that process.

“So why don’t we just go through that process?” Cortez Masto asked.

“At the risk of divining Congress’ intent, it would seem that Congress in 1993 determined that the tribe had a strong historical connection to the area that’s called the service area,” said Tahsuda.

Cortez Masto questioned Harris as well, asking whether he’d had conversations with North Carolina’s state leaders. Harris said that, while he has letters of support from leaders in the Cleveland County area, he does not have a letter of support from Cooper.

According to Sneed, Cortez Masto’s questions were the result of a detailed meeting EBCI leaders had with her staff.

“Some of the exact points and questions that we posed to her staff were the exact questions that her staff asked to the BIA representative John Tahsuda,” said Sneed. “She hit it hard and she hit it with the truth and law and policy. And that is a direct result of the work we did this week.”

The next step for S.790 would be a markup session, in which committee members can make changes to the bill and ultimately vote for or against it. A favorable vote would allow it to advance to the Senate floor for a vote from the entire body.