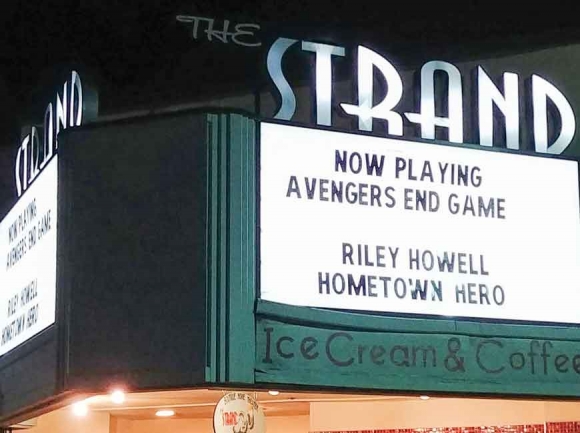 I stood on the sidewalk on Main Street in Waynesville this past Thursday afternoon, surrounded by hundreds of members of my community as the body of Riley Howell was escorted by a couple dozen law enforcement officers to the local funeral home: a 2.5-hour escort from the UNC-Charlotte, where he was shot and killed by a gunman he tackled in an effort to stop the active shooter on campus.

Standing on the corner of Main and Walnut Street, I had chills running through my heart and soul — of sorrow and of pride. Howell is a hero, and in every sense of the word. And that evening, I strolled from my downtown Waynesville apartment to the nearby neighborhood bar to sip some suds and reflect, maybe clear my head, if possible.

En route to the bar, I walked by the Wells Funeral Home, the same place where Riley’s casket was laid down before the memorial service on Sunday at Lake Junaluska. Earlier that day, during the escort, the building was surrounded by hundreds of onlookers and community supporters paying their respects with American flags held high, dozens of law enforcement vehicles and national media attention.

That evening? Silence on Main Street. No people. No noise. And I strolled by, gazing over at the funeral home every so often, thinking about this tragedy, and how, right then and there, he was right there behind those doors. I walked along an empty Main Street. Signs everywhere giving thanks and love to Riley.

In my unrelenting thoughts about life and the grand scheme of things since the shooting, I keep circling back to the idea of death, and that timeless question — why do bad things happen to good people?

Riley was only 21, with so much life and moments ahead of him, so why did he perish and the rest of us keep on living our lives? Though it’s one of those unanswerable questions, what can be stated is the legacy of Howell, one which has inspired folks the world over to take action and stand up for others in the face of evil run amuck.

A couple years ago, I was asked to give a eulogy at my uncle’s funeral. He died unexpectedly, with a shock wave rippling through my family. Behind the church podium, my Uncle Scott’s casket in the center of the room, I spoke of the idea of “time” and how we find ourselves grieving through the loss of a loved one.

For me, I have made amends with death a long time ago, due to countless friends and family members I’d lost too soon over the years. And with mourning someone close who is no more, I approach from the angle of celebration, of recalling great times with those we hope to see again someday — wherever and whenever that may be.

For many, there are three things that cause sadness through mourning — you feel cheated out of time, not telling that person you loved them enough, or you never righted the wrongs between the two parties. But, you must remember that we all have a finite amount of time on this earth and within the presence of those we couldn’t imagine living without.

So, what does one do? Well, if you make sure to wake up every day and are aware of those three things above, then you’ll be better equipped to not only reinforce or rekindle love with those you care about, you’ll also have a keen sense of your place in the cosmos we often ignore or don’t appreciate the grandeur of.

Life is not about winning, it’s about having the will each day to get up, get out the door, and compete — to ultimately make the world a better place than when you arrived on the scene. And Riley left this world a better place than he found it, and we are a better society for his selfless actions that not only saved lives, but also lit an eternal flame of hope and compassion in seemingly dark times.

Pictured above is The Strand, our downtown Waynesville movie theater, and what the marquee stated that day Riley was escorted back home. I, and everyone else around the world, echo the sentiments of that marquee. This small mountain town will never, ever be the same again.

Love each other. Just do it.

1 There will be a special concert in memory of the late banjo great Steve Sutton at 7:30 p.m. Friday, May 10, at the Colonial Theater in Canton.

2 Acclaimed author Ron Rash will be the next installment of the The Southern Storytellers Supper Series on Thursday, May 9, at the Folkmoot Friendship Center in Waynesville.

3 The Smoky Mountain Rollergirls continue its roller derby season with a double header Saturday, May 11, at the Swain Rec Center in Bryson City.

4 Singer-songwriters Buddy Melton and Milan Miller will perform at 8 p.m. Thursday, May 9, at Cataloochee Ranch in Maggie Valley.

5 Americana/alt-country act Grayson Jenkins will hit the stage at 9 p.m. Saturday, May 11, in The Gem downstairs taproom at Boojum Brewing in Waynesville.