We’ve got the nicest house in the campground 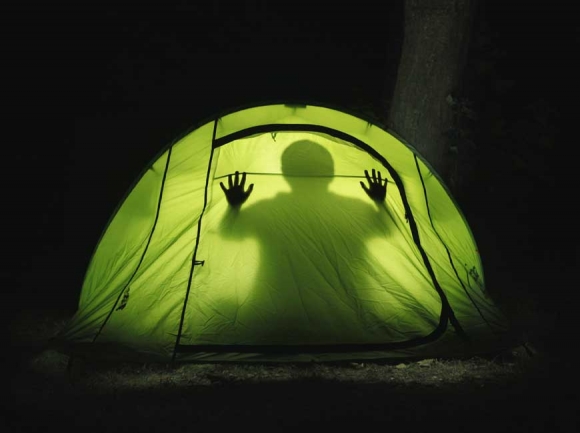 We are not a camping family. It’s probably my fault, if there is a need to assign blame. I joined the Boy Scouts when I was a kid mostly because some of my friends did. Also, I liked some of the Patrol names. For example, I was a member of the “Screaming Eagles,” which sounded fierce, intimidating and patriotic, all at the same time. But I hated the uniforms, which seemed goofy and slightly effeminate to me, with the scarves and the khaki shorts and all the bling for the more highly decorated scouts.

More than that, I hated camping, which is problematic if you are going to be a scout. In theory, it looked appealing, communing with nature, fishing for speckled trout on sun-drenched autumn afternoons, and then frying them later that evening in our tiny silver frying pans over the campfire as the stars blinked above the smoke.

In reality, we caught nothing, ate Beanie Weanies out of little cans with half a sleeve of stale Saltine crackers, crouched around the campfire for a little sliver of warmth, retreated to our tents, climbed into slightly mildewed hand-me-down sleeping bags, and then waited hours for sheer exhaustion to rescue us from a hellish night of trying to find the most tolerable spot between the roots and the rocks while two boys on the other side of the tent waged a raucous farting contest, noxious fumes filling the tent like a hot air balloon. Except it was freezing. And these two idiots giggling for the next two hours, and then snoring for two more hours after that. And me burrowed down into the sleeping bag until I had to come up to breathe the foul air, pondering the sundry miseries of my life, this chief among them.

I thought my camping days were long behind me, of course. So, when my beloved suggested three years ago that we try camping at Merlefest — one of the country’s best music festivals held every spring on the campus of Wilkes Community College — well, I guess I was “triggered,” as they say.

“Come on, it will be an adventure,” she said. “Making s’mores, sleeping under the stars.”

“We’re grown-ups,” I said. “Getting two kids through braces without maxing out the Visa is an adventure. I’d rather sleep in the car in the parking lot at Arby’s. We’ll order some curly fries and pretend they’re s’mores.”

My spouse was not amused, and not so easily deterred. When I came home from work a couple of days later, she had spent most of the day researching and reserving a space in a campground conveniently located a few miles from the festival.

“It has regular shuttles to and from Merlefest,” she said excitedly. “We won’t have to drive in all that traffic. Plus, it has a shower facility and free coffee.”

“Free coffee?” I said. “Well then! Does it have a tent with a king-size bed and a heat pump?”

“No,” she said. “But we can get a barrel and all the firewood we want for five dollars.”

“I am guessing the deposit is non-refundable?” I said.

“How did you know?” she smiled.

The next day when I got home, she had researched and purchased a tent large enough to host a Christmas party. I mean, there is literally enough room in this tent for 12 people to sleep comfortably. It has a foyer. It has a parlor. There’s a study. And a sun room.

I did not ask her what she paid for it, or why we needed the Biltmore House of tents for a family of four to use at a music festival. I could not think of what to ask her. But, I imagine she had anticipated a few questions and had prepared some well-crafted answers, so she went ahead and gave them to me anyway.

“I thought we might want some space,” she said.

“Honey, we could spend a week in that tent and never run into each other,” I said.

She bought some little LED lanterns and some headlamps that would make us look like West Virginia coal miners.

“For when we want to read at night,” she explained. “Or might need to venture out to the bathroom.”

“I’m not wearing that,” I said, feeling that I was drawing some kind of important line. “I was once a Screaming Eagle!”

“What are you talking about?” she said.

On Sunday, we returned from our third year of camping at Merlefest. Same campground. Same tent. Same free coffee. Even some of the same campers from previous years. I still don’t love camping, but I also don’t hate it liked I used to. Maybe I’m even a little bit proud of our enormous tent, certainly the nicest house in the neighborhood during our four-day stay each year. I believe I see other campers peering over from their pup tents with looks of envy, if not awe.

But I still haven’t worn my headlamp. Pffft. I guess there’s still a little Screaming Eagle left in me after all. At least once a year, I guess we are a camping family.