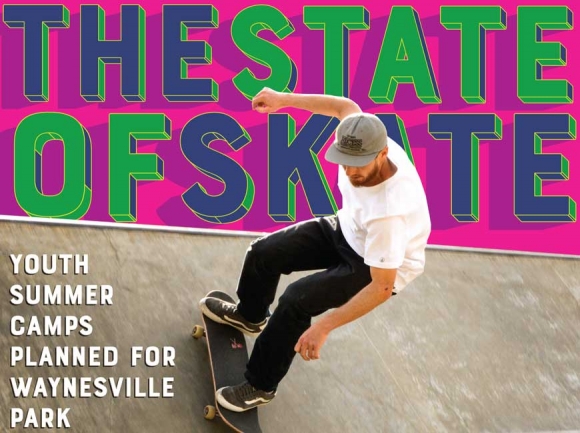 When the Town of Waynesville’s skate park opened in 2013, it was a welcome addition to the suite of recreational opportunities then available to area residents — especially to the small but zealous group of die-hards like Jared Lee who grew up grinding around town.

Although skating has always been a niche activity, the skateboarding industry is now poised for a major boom, just as one of the park’s biggest proponents prepares to bring up the next generation of local skaters.

When Waynesville native Jared Lee began skating in eighth grade, things were much different for skaters than they are today.

“Skateboarding was way more counterculture here than it is even now,” said Lee. “I remember having people yell at me out of windows, I had a beer bottle thrown at me one day skating down the street. You were definitely looked at as like, the riffraff.”

The stereotype of troublemaking kids on skateboards has long persisted, but for Lee, skating was always a way out — he became sponsored by the time he was 16, and by the age of 25 he’d been paid to skate in Canada, Ecuador, Fiji and Spain alongside legendary skaters like Lance Mountain, Christian Hosoi and Tony Hawk’s son, Riley.

“When I wasn’t doing trips, I would come back here,” he said. “I started working at [Maggie Valley outfitter] Skis and Tees when I was 16. They offered me a job there selling skateboards.”

Despite his involvement, there was still no real place for him and his friends to practice the latest tricks without drawing unwanted attention, until a little guidance from his mom pushed him in the right direction.

“I’d sit around with my teenage friends and everybody complained that we needed a skate park and the cops would kick us out of everywhere and nobody wanted us — because we looked bad to businesses I guess,” he said. “But my mom was like, ‘You can sit around and complain to your friends, or you can start showing up at these meetings and do it the right way.’”

So Lee began attending meetings of the Town of Waynesville Board of Aldermen while still a freshman in high school.

“I went to town meetings for years,” he said. “Finally, we gained some traction and sometimes other skaters would show up, but it was hard, because those town meetings, when you’re young kid, you sit for a couple hours and you listen to everybody else speak and say what they would like to see in the community, and then you get up and speak for your couple minutes.” 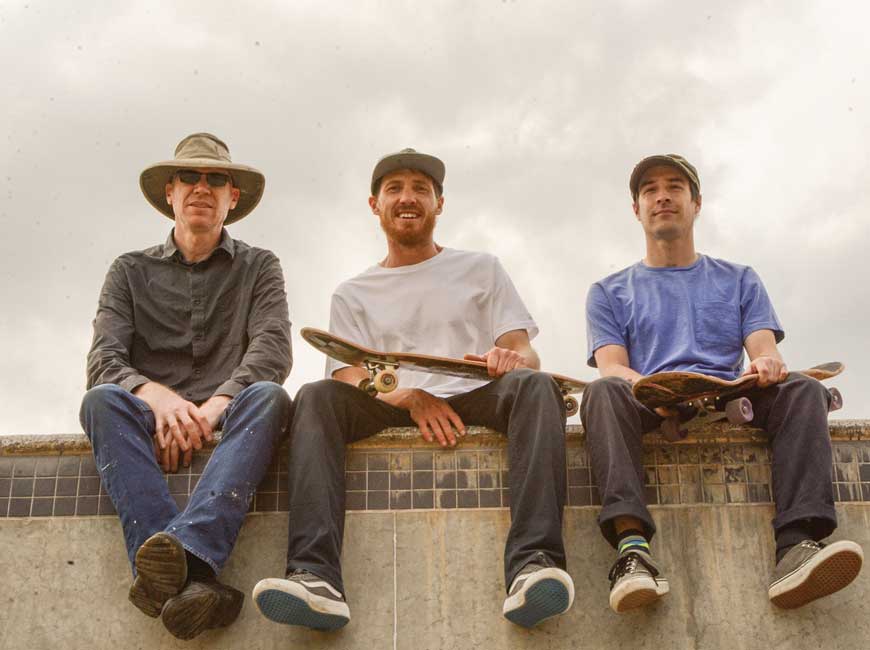 Rob Dolman (left to right), Jared Lee and Shelby Mihalevich have been skating together for years. Cory Vaillancourt photo

Lee said there wasn’t a lot of outright opposition to the skate park, but like any other budgetary ask, it’s a tough sell in the face of other priorities and emergencies that end up in municipal budgets every year.

“And then you don’t hear anything, and there’s no progress, and you show up the next month, any kind of the same thing happens again until finally they have to take notice of you,” said Lee. ‘We started getting bigger numbers showing up, and then [Alderman] Gary Caldwell was the one guy that finally took us under his wing and said, ‘I will make this my project.’”

“The park has been like a blessing to all of us. For the skaters to have a place to come, and this is a fantastic facility, it’s so awesome that a small town like Waynesville has a place like this,” he said. “And it’s got to be great for police. I remember for years, police chased us around town.”

At the time, there was — and, actually, still is — a ban on skateboards on sidewalks as well as on most town streets. Violators could face fines up to $50 and also see their boards taken away.

“The cops would call my mom at like midnight say, “We just caught Jared skating uptown,’ and she would be like, ‘When he’s committing a crime, call me, but as long as he’s just riding a skateboard, don’t wake me up. If that’s the worst thing he’s doing in his high school age, please.’”

He also thinks the town’s commercial establishments are happy with the park as well.

“It’s a win-win,” he said. “I feel like it’s got to be great for business owners. We are not in front of their stores near as much as we used to be, and when you come here, you make friends. You meet other people with the same likes and interests.”

That, according to Lee, is the most important effect of the park to date — making friends. In fact, if it weren’t for a local skater a few years older than him, Lee, and the park itself, might not even be here today.

“He was like the one older guy who took me under his wing when I was young,” said Lee of Rob Dolman. “He was like a big brother to me.”

“I grew up in this town skateboarding in the 1980s,” said Dolman, 45. “I didn’t really realize how big a deal skateboarding was going to be, and Jared was one of the kids that was always hanging around.”

Having a mentor, or a role model to look up to in the skating community, was all the more important in a small town where skaters hadn’t yet achieved the acceptance they had in larger cities on both coasts.

“This is typically considered a rural community,” said Dolman, “and there’s not much to do outside of standard sports — football, baseball, basketball soccer, which are not bad — but if there’s anybody that doesn’t see themselves fitting into that or whatever, skating has a strong subculture, and these kids now have plenty of local skate parks that I didn’t have. Skateboarding kept me from getting into trouble, but people thought that skateboarding was the trouble!” 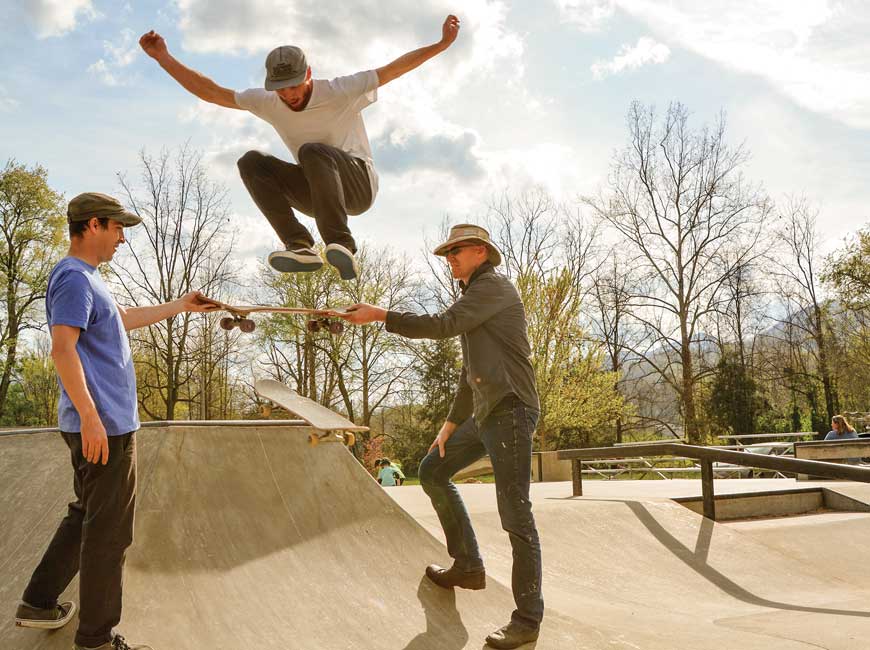 Just as Dolman introduced Lee to the world of skateboarding, Lee’s looking to help the next generation get involved — and there’s really no better time; skateboarding will, for the first time ever, become an Olympic sport in 2020.

“It’s going to change a lot of things with skateboarding,” said Lee. “I saw it when snowboarding entered the Olympics. We saw a big boom in the shop. It went from a counter-culture thing to a something that was more accepted. We’re a year away from that.”

That’s why Lee, along with Dolman and fellow skater Shelby Mihalevich are working hard to offer a series of summer “skate camps” at the Vance Street skate park, beginning in June.

“I just felt like there was a void that was not helping the new generation get into it,” said Lee. “Having camps would bridge that gap.”

Details on the camps are still coming together, but Lee is nonetheless eager to get started.

“It’s been a hectic last few months trying to get everything going before summer,” he said of the camps. Hopefully if things go well, the park will host a contest sometime in August.

“This skate park’s been here for so many years, and the town spent a lot of money on this, and there’s never anything going on here,” he said of the contest, which could draw skaters from as far as Charlotte and Atlanta. “They don’t do that with the soccer fields, or with the swimming pool. Let’s maximize this.”

Increasing the level of activity at the skate park will not only ensure the town gets its money’s worth, but also that the area’s current crop of skaters will have a richer, fuller experience than he and Dolman had growing up.

For more information on Jared Lee’s summer skate camps, email him at This email address is being protected from spambots. You need JavaScript enabled to view it..