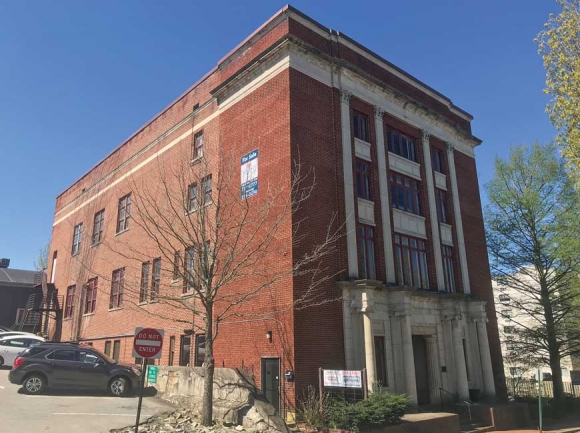 Most recently the home of the Gateway Club, the historic 1927 Masonic Lodge building on Church Street is now under new ownership. Cory Vaillancourt photo

A long-underutilized gem in the heart of Waynesville’s historic downtown has finally found a new owner, sparking optimism that new businesses could move in and further augment Haywood County’s urban core while yet preserving its unique aesthetic.

“One day we were just sitting there, admiring the building. The opportunity came around and the rest, as they say, is history,” said Shan Arora, one of the building’s new owners.

Renovated in 1973, the building has been on the National Register of Historic Places since 1988, and was designed by British-born architect W.H. Peeps, who worked on a number of important buildings across North Carolina including another Masonic Temple in Gastonia.

Most recently, the building was home to the Gateway Club, a restaurant and private club. The third-floor ballroom was available for events. The new owners plan a somewhat similar set-up, with a restaurant on the ground floor, office space on the second, and a space to rent for events on the top floor.

Records from the Haywood County Register of Deeds office show that on April 12 the property was purchased by Mandir Street LLC; Mandir is a Hindi word that loosely translated means “church,” a clever play on the building’s 37 Church Street address.

With Arora in Mandir LLC is his father-in-law, well-known Haywood County businessman Satish Shah, owner of the Best Western in West Waynesville, as well as his brother Prakash. Arora said his in-laws have been part of the business community in Haywood County for decades.

The .36-acre parcel, which includes the 17-space parking lot directly adjacent, was last sold in 2012 for $750,000, and prior to the current sale was appraised at $1.1 million. According to the deed, Mandir Street LLC paid $1,770 in taxes on the sale; Haywood Recorder of Deeds Sherri Rogers said that those taxes translate out to $2 per $1,000 on the sale price, so the building was probably sold for right around $885,000.

Arora, an Atlanta-based sustainability consultant, says he already has ideas on how to make the building more environmentally friendly, including natural lighting, water-saving appliances and LED lighting.

That’s not to say the building is about to become futuristic, by any means. Arora is a self-proclaimed history buff who remains fascinated by the building’s legacy and architecture; those energy-efficient lighting fixtures, for example, will remain period when possible.

“Downtown Waynesville is an amazing place and this building is an amazing asset,” he said, adding that the building was “better than expected” in terms of condition. But Arora also admitted that the devil’s in the details, and he won’t know exactly how much work will go into the building until his team gets a little deeper.

“All ideas right now are, of course, subject to the reality of the marketplace,” he said. “But we really envision the first floor as some kind of restaurant.”

The second floor could wind up as office space, but Arora said he and his partners are trying to figure out what, exactly, the right kind of tenant might be.

Crowning the building, on the third floor, is the ballroom, which Arora called “magnificent.”

“We want to be true to the historical purpose of it,” he said. “We want it to be a rentable location.”

He’s also considering using the basement for “something that would be an addition to downtown Waynesville,” once that need becomes apparent.

As to his timeline, Arora seemed excited for the Masonic Lodge to rejoin Waynesville’s energetic tourist district, but he’s also unwilling to tarnish the legacy of the 92-year-old structure by rushing it to market.

“From a business perspective, we want to get going ASAP,” he laughed. “But we also want to be very purposeful. We don’t want to rush. This building’s been in the community for so long, we want to give it the respect it deserves.”