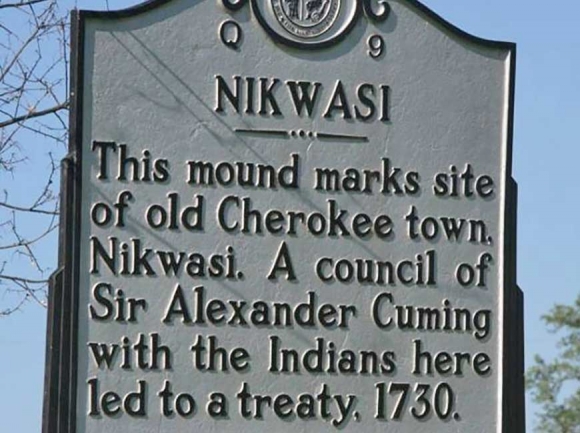 Then there’s the aspect of this argument that hasn’t really been given much attention in this debate, that of white colonists and settlers and their treatment of Natives. What about that “1730 treaty” mentioned on the Nikwasi Mound historical marker? Wonder to what degree and how many times that legal contract has been violated?

I can appreciate that the citizens of Franklin raised $1,500 and purchased the mound in 1946, saving it from almost certain destruction and development. That’s a validation of the townspeople’s good will and foresight in an era when some still didn’t deem preservation of Cherokee culture important and thought assimilation was the best path forward.

We all understand there’s been some animosity between the Tribe and the town, most recently over the town’s use of an herbicide that turned all the grass on the mound brown. As Mayor Bob Scott pointed out in a column in this newspaper last week, that was an accident and in no way should be a factor in the current debate.

The groups who are part of the Nikwasi Initiative — despite what some are saying — all have track records in cultural and land preservation. The leaders already have a head start in creating a corridor of historic Cherokee sites, have plans for a visitor center and Museum of the Cherokee auxiliary site, and for a historic statue. It seems obvious that it’s a group already hard at work on building something special for Franklin and Macon County.

Those who argue the deed restrictions won’t allow the town to sell the mound should listen to Town attorney John Henning Jr. The same protections for the mound now held up as preventing a sale could be included in a future deed, as could a reversion clause giving ownership back to the town should the group not fulfill its obligations.

As this debate moves forward, perhaps most important is to keep the tone civil. There are good people on both sides of this issue, and many of those have strong feelings. By arguing that the sale should occur and would benefit the town, we aren’t denigrating those who feel differently.

The town saved the mound and it should be proud of that legacy; now, its next stewards — the Nikwasi Initiative, which includes members of the EBCI — will transform the site into a showcase for the unique cultural history of this region.