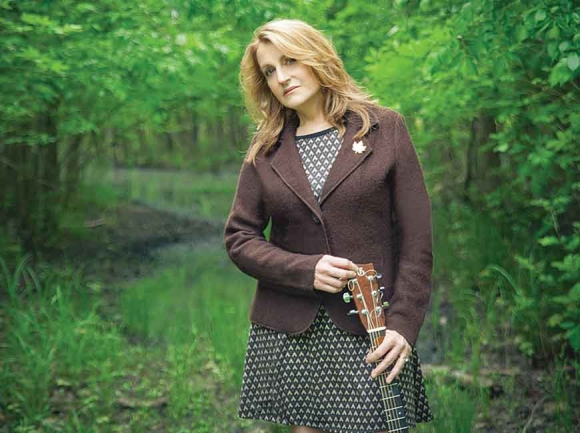 The voice of Claire Lynch is incredibly soothing — in conversation and in front of a microphone.

With a songbird tone and cadence, the singer is like a free-flowing breeze, something that swirls around you and picks you up, as if you’re a fallen leaf at the peak of beauty, eager to once again sit high in the sky.

The three-time International Bluegrass Music Association (IBMA) “Female Vocalist of the Year” (1997, 2010, 2013), Lynch also penned “Dear Sister,” a take on a character in a Civil War book of letters she came across, which led to the IBMA award for “Song of the Year” (2014).

Born in Upstate New York and coming-of-age in Alabama, Lynch’s musical approach has always had both sides of the Mason-Dixon Line in mind, something at the core of her songwriting, where history and characters come alive, as to offer a timeless message of compassion and change. A longtime Nashville fixture, she has called Toronto, Ontario, home in recent years.

And in the truest sense of the words, Lynch is a songwriter and an artist. She soaks in the essence of whatever environment — physically, socially, politically, spiritually — she finds herself in, aiming her creative and personal intrigue towards whatever force is calling after her heart and soul.

Smoky Mountain News: Do you remember the first song you wrote?

Claire Lynch: Probably 19 years old, when I finished one. It was “Hills of Alabam’,” which was one of my more successful cuts, because it was on Kathy Mattea’s gold album, “Willow in the Wind” (1989).

SMN: Where did you learn how to write songs?

CL: I’d say a lot of it came from singing with my family, learning to read music in choir, sheet music at home, messing with the piano, and just dealing with melody all my life. As far as the writing is concerned, I wouldn’t consider myself a literary expert by any means. As a matter of fact, I didn’t really love reading as a kid. I think I kind of lean more on my heartstrings for lyric. Now? I’m trying to educate myself. [Laughs].

SMN: Whatever it is that’s in your heart is what should come out anyways, and then go from there…

CL: Absolutely. It should be the muse or whatever you want to call it. I think you really have to listen to what that is and how it comes to you, let that flow for a while. But, there comes a point when you have to put some craft to it. It’s very rare that a song just writes itself from beginning to end.

SMN: Who were the songwriters that are the foundation of where you’ve come from as an artist?

CL: Well, there were a few people who struck me as fabulous songwriters. One was Mac McAnally from [the state of] Alabama. Nanci Griffith has this incredible life view, world view, and she’s beautifully articulate. Rodney Crowell, wonderful writer. There’s a friend of mine from Montana named Kostas [Lazarides], he came to Nashville and ended up writing several hits. He was so prolific, kind of different, very melodic.

SMN: What do you think the role of the songwriter is in the digital age, with so much distraction and perhaps inconsequential priorities?

CL: Oh, that’s an interesting question. I think there’s a general tug on everyone’s heart to be a little bit more down to earth and genuine. The older you get, the more you realize that digital performance or digital living has its value and its merit, but it seems to also cause us to lose something of humanity. So, I would think the writers, poets and songwriters of the world are going to be pulling back towards more of a humanistic reach from one person to another, and at heart level. We can bring social change for the better — I hope so.

Acclaimed singer-songwriters Claire Lynch, Jerry Salley and Irene Kelley will perform on Saturday, April 6, in the Queen Auditorium at the Folkmoot Friendship Center in Waynesville.

Started in 1996 at the Balsam Mountain Inn and modeled after similar performances at Nashville’s famous Bluebird Café, the “Songwriters in the Round” series features performers seated in a circle with the audience all around. The musicians trade anecdotes about the music industry and sing the songs they’ve written.

The 2018 IBMA “Songwriter of the Year” and the 2003 SESAC “Country Music Songwriter of the Year,” Salley has had over 500 songs recorded in his multi-award-winning career. To date, his songs have sold in excess of 17 million records worldwide and internationally he has penned eight No. 1 country hits in Australia.

There will be a social from 6 to 7 p.m. with the concert to follow. Tickets are $25 for adults, $12 for students. For more information and/or to purchase tickets, visit www.folkmoot.org or call 828.452.2997. Tickets will also be available at the door.