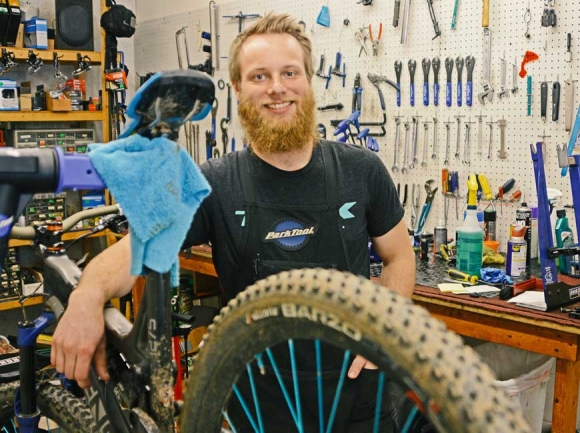 Zach Moss spends a lot of time in the shop working on repairs (above) but also enjoys interacting with customers (below). Holly Kays photos

“That’s the hardest part for me in all of this, the saying that you don’t know what you’ve got until it’s gone,” said Moss. “I always thought about making the trip to come out and visit and all that, and it never happened.”

Despite never knowing his grandfather well, Moss, 26, turned out an awful lot like him. As he’s gotten to know the people who knew his grandfather, he’s heard it over and over: there’s a striking similarity in their mannerisms, their love of music, their picky eating habits, the fact that they both played guitar.

And, most importantly, their shared passion for bicycles.

“From what I’ve heard from a lot of people that really knew him, it’s kind of like that twins separated at birth kind of thing where we have all these common interests, and we never knew each other, but we share all these niche interests that normally a lot of people aren’t really familiar with,” said Moss.

When Moss came to Waynesville last year after Mudge’s death, the little bike shop outside town caught his eye. What was going to happen to it, he wondered, now that his grandfather was gone?

“I got this crazy idea of what if I came and opened this bike shop and ran it for myself?” said Moss. “I asked family members to see what the family wanted, or if there was anybody else in line to buy the shop or take it over. It turned out there wasn’t anybody to take this place over. Nobody was going to buy it.”

So Moss made a decision. He would move across the country and carry on his grandfather’s legacy at RollsRite. He would have gotten there sooner, he said, if his girlfriend, a nurse, didn’t need some time to find a new job in Western North Carolina. As it was, they loaded up all their belongings in a U-Haul and drove 2,500 miles to arrive in Waynesville three months after Mudge’s death. They rolled up in the early morning hours of Saturday, Feb. 9, took the weekend off, and the shop opened the following Monday.

“We’ve been open for business ever since,” said Moss.

The move wasn’t quite as crazy of an idea as it may sound at the outset. Though young, Moss is quite experienced when it comes to bicycles. He spent the past five years working for Bearded Monkey Cycling in Yakama, Washington — he knows his way around a bicycle repair, and he’s also experienced in sourcing parts and working with distributors.

“A lot of what I had learned working in the bike shop back in Washington directly translated to this place,” he said.

Moss likes to ride bikes as well as fix them.

So, he dropped the car at his parents’ house and started commuting on bicycle. The bike served as his main vehicle during the year or so he lived there. After that, he moved out of the city but kept biking for fun. Moss said he was “kind of a fat kid coming in” and learned that biking was a way to keep fit without making exercise feel like work. 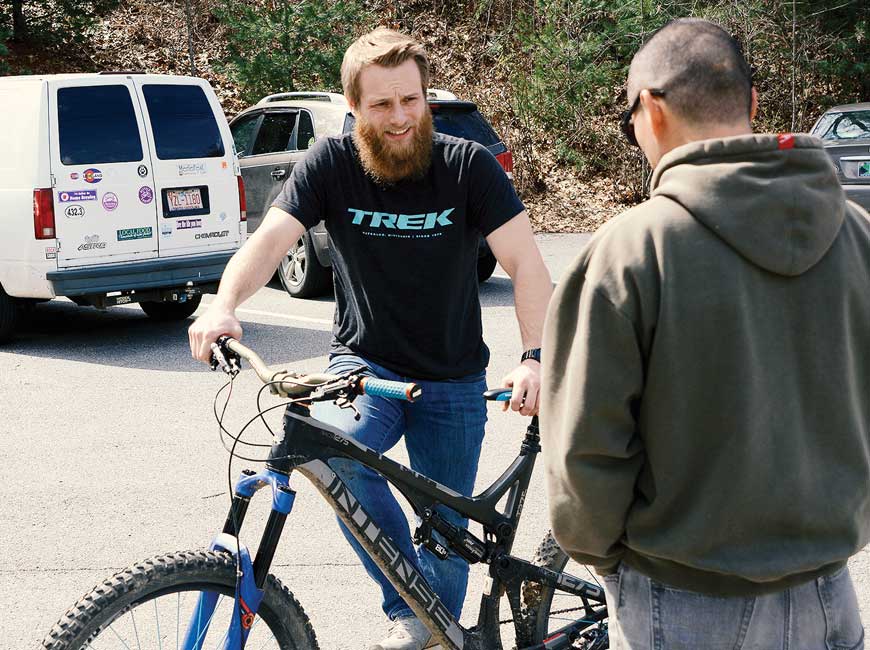 Moss would then move overseas to spend a few months in Germany, but he always knew he was coming back to the U.S. Every time he’d try to think about what he wanted to do when he returned, bicycles were all he could think of. So, he showed up at Bearded Monkey Cycling and asked if they were hiring. They were. Moss got a job and even joined the shop’s race team — road biking is his preferred flavor of cycling.

“I know the area is really big on mountain biking in particular, but I come here with a pretty strong background in road cycling, so I want to bring that experience to the area,” he said of his new home. “To help people get their bike fixed or try to point them in the right direction if they’re looking to get into the sport.”

Moss has some grand plans for what is currently a small shop with modest inventory.

Mudge mostly worked on cheaper bikes, ridden by customers who cycled to get to work or were casual recreational cyclists. While Moss said “by all means I still 100 percent want to cater to that,” he also wants to add high-end bikes to the shop’s repertoire.

“I come from a background where I do race. I do ride high-end bikes, so I speak that language as well,” he said. “Whether it’s the $500 customer just commuting or somebody getting ready for a three-day stage race, I want to be able to cater to cycling of any sort of degree.”

He also wants the shop to be a hub — for information, for cycling-centric gossip, for community. One of the first things he did upon taking over the shop was to set up a small seating area, intended for people to come and hang out regardless of whether they’re finishing a ride, starting a ride, or just coming by to shoot the breeze.

In the future, Moss wants to add a coffee bar and beer fridge to the store to encourage that sort of mingling.

“I don’t want this to be just a shop where you spend money,” he said. “It’s got to be more than that. It’s got to be a place where cyclists feel comfortable that you can literally come in here and chit chat and spread the gossip.”

That will all take time, but for Moss it’s a worthy cause. He loves cycling, he loves people and he loves being his own boss. And behind it all runs a desire to honor his grandfather’s legacy.

“Everyone only had really kind words to say about him, and that really ups the pressure on me in filling his shoes and keeping people happy, giving that utmost level of customer service,” said Moss.

Rolls-Rite Bicycles is located at 362 Asheville Road in Waynesville. The shop offers bicycle repairs, merchandise and information on local rides. Hours are 9 a.m. to 6 p.m. Monday through Friday and 9 a.m. to 5 p.m. Saturday. Mention this article and receive $20 off a tuneup through April 30. 828.246.9801.