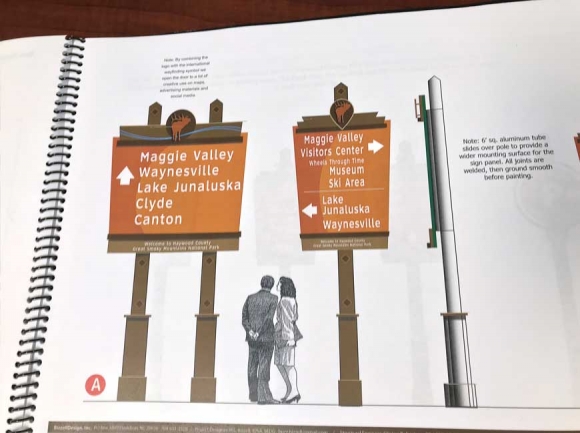 An illustration shows the size, shape and scale of wayfinding signs that will one day — maybe soon — dot Haywood County. Cory Vaillancourt photo

In the ever more competitive battle to lure motoring tourists to Haywood County — and to keep them in the county once they’re here — a plan by the Haywood County Tourism Development Authority to install custom wayfinding signage remains at a dead stop, with no signs they’ll be up any time soon.

“It’s been talked about for a number of years,” said Lynn Collins, executive director of the Haywood TDA. “Obviously, we would like to have had it done by now.”

The handsome, custom-designed signs were to be phased in and differentiated by zip code, with Canton signs bearing a rendering of a black bear, Clyde signs topped with a cardinal, Waynesville signs displaying a Plott hound and Maggie Valley signs featuring an Elk.

“So far, we’ve paid the contractor, I think it’s $24,000,” said Collins. “That was for the design concept, the placement, doing all the research, securing a fabrication vendor, and doing the work with the North Carolina Department of Transportation — all the paperwork, and everything else involved with that.”

“We had actually hoped to be in the fabrication process by the end of 2018,” said Collins.

That hasn’t happened because many of the signs violate one of DOT’s rules for placement.

“Once you get your site plan done and everything DOT has to physically look at everything and make sure they’re in the right place and everything because they have certain guidelines they follow with wayfinding signage, and once they approve the sites, there’s a document I have to take to the county commission to get approval,” Collins said. “At this point, there are a few locations that DOT wasn’t happy with, so they asked the contractor to go back in and re-site them, so we are waiting on DOT approval to move forward,”

According to state guidelines, “Wayfinding signs are generally located within a few blocks of the destination, and not further than 2 miles from the destination.”

That doesn’t make much sense in rural counties like Haywood, where most towns and attractions are more than 2 miles apart. Even getting in to Maggie Valley via Interstate 40 requires a drive south on U.S. 276 of several miles, meaning motorists would have no idea about Maggie Valley’s attractions until they were already practically in the town itself.

“The signs they laid out, they went way outside of the municipalities,” said Doyle Ward, a traffic engineer in the DOT’s 14th district office.

According to Collins, the TDA continues to wait on approval from DOT, but that was news to Ward, who said that the last thing he recalls is that the DOT was waiting for a new submission of sites that don’t violate DOT placement policies from the TDA.