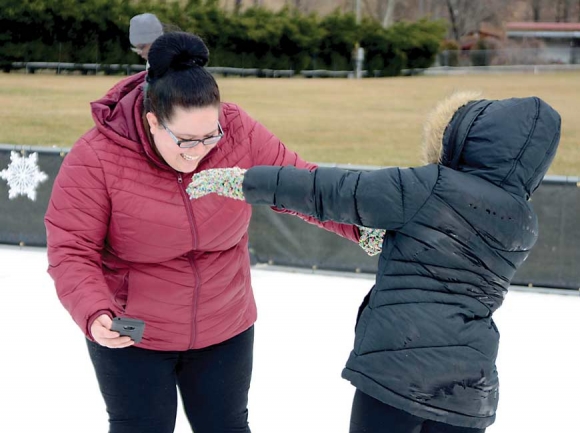 Skaters engage in some light horseplay at Maggie on Ice. Holly Kays photo

What was hoped to be a slick new attraction designed to bring more visitors to Maggie Valley during wintertime has instead been shown to be an attraction of a different sort — a magic trick that turned $36,268 of taxpayer money into just $4,338 of ticket sales.

“Just looking at it, I think trying it again isn’t justified by the results that we had,” said Nathan Clark, Maggie Valley’s town manager, of the 40-by-50-foot portable synthetic ice rink funded almost totally by the Haywood County Tourism Development Authority after a board-approved request from the Town of Maggie Valley last spring.

“As far as using this as a platform to spur a ‘next year’ project, I don’t think the [Town] board has any desire to do that,” said Clark, who is charged with carrying out the board’s direction. “The opportunity cost for us is too great to try to do this again when we have other projects that we think we can get better returns on our investment.”

Ghost Town isn’t the only nostalgic touchstone for those who’ve haunted the tiny western Haywood County town of Maggie Valley over the years; there’s been an ice rink or two here or there before, and reviving the tradition to augment winter tourism stalwarts Tony’s Tube World and Cataloochee Ski Area had been talked about for years.

Maggie on Ice, as it was called, opened at the Maggie Valley Festival Grounds on Friday, Feb. 8, for what was to have been a 10-day engagement.

Renting the rink from the out-of-state operator cost $26,270, and additional on-site kids activities like putt-putt golf added another $4,374 to the total. After $4,118 in advertising — including in The Smoky Mountain News, The Waynesville Mountaineer and Vicinitus Haywood — the town donated $440 for music, $7 for posters and $1,059 in public works overtime pay to total $36,268.

The town fronted all that, and will be reimbursed by the TDA up to the $35,000 figure requested in the TDA’s funding application.

Haywood’s TDA collects a 4 percent room occupancy tax in the county for each night a room is rented, and then its board directs the disbursement of funds on marketing the county as a destination — often by directing advertising or sponsorship efforts, but sometimes through the funding of an event or attraction like Maggie on Ice.

Admission was $8 for adults and $5 for children and was collected by the Maggie Valley Chamber of Commerce, which coordinated the volunteers required to staff the rink.

Even if it had been open all 56 hours as scheduled, the rink would have needed to host 99 paid skaters an hour at an average admission price of $6.50, but weather closed the rink all day on Feb. 12 and forced early closings on three other days as well, meaning it was only open to the public for around 40 hours total, at a final cost of more than $900 an hour.

Full financials provided via email by MVCC Executive Director Teresa Smith to Town Manager Nathan Clark dated Feb. 20 show that the chamber counted $4,338 in admissions and paid local volunteer groups a total of $1,500 to staff the event, as well as $920 in contract labor and $65 for printing and wristbands, to total $2,485.

“There’s a lot of ‘glass half full’ people who could say, ‘If the weather was better,’ or ‘maybe if we had a tent,’ – there were lots of things that we could have done differently,” Clark said, “but at the end of the day, when you’re looking at the size of the rink that we had, we would need to skate around 4,000 people, and we didn’t come close to that.”

Instead, the rink could hold no more than 40 skaters at any one time and saw just 794 skaters total. 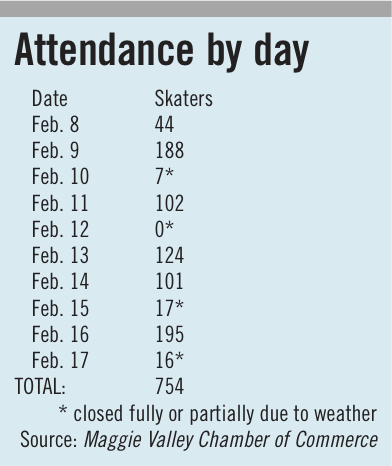 Although Maggie on Ice saw visitors from Florida, Georgia, South Carolina and Tennessee — as well as the North Carolina towns of Arden, Asheville, Black Mountain, Candler, Murphy and Sylva — 652 of the 754 skaters were from Haywood County, and just 35 room-nights were purchased in connection with the rink, according to MVCC polling.

If the average room in Maggie Valley rents for $200 a night, the 35 room-nights would have generated $7,000 for local hoteliers and about $280 in room occupancy tax revenue for the TDA over those 10 days.

“It’s one of those things though, I’m glad we did do it,” Clark said. “People have been asking for it, have fun memories, and we have exposed a whole different generation of Haywood County folks to ice skating that they hadn’t necessarily had.”

Value of the experience aside, two other TDA-funded projects directly related to but funded separately from Maggie on Ice have, unlike Maggie on Ice itself, the potential to create lasting value for tourists and locals alike.

Last summer, a $12,800 asphalt pad was poured at the Festival Grounds to support the rink.

“The pad can be used for lots of different things even in the summer months,” said Clark. “When you have that much of an impervious surface, tents can be set up over it. You can lay an actual dance floor on that for music events, or a dining tent so you don’t have any kind of mud or dust. There’s a lot of uses there.”

Around that same time, $14,000 of TDA funding paid for the winterization of Festival Grounds bathrooms, consistent with TDA goals of enhancing winter tourism in a county where spring, summer and fall occupancy rates have never been healthier.