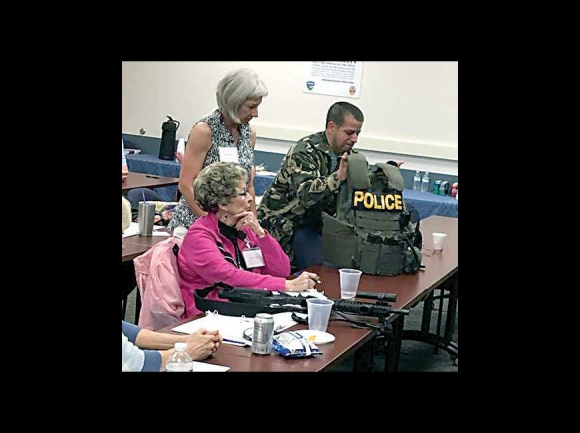 Not long after retired U.S. Air Force officer and former teacher Mary Ford moved to Waynesville with her husband, she decided to enroll in something called the Waynesville Civilian Police Academy. The next year, she found herself in charge.

“We wanted to do something for the community,” Ford said. “Law enforcement, teaching, the fire department — those are the ones, probably, that need more help than anybody.”

Since 2011 Ford’s been helping run the free eight-week course designed to give citizens a peek behind the curtain at the Waynesville Police Department.

The concept of citizen police academies was introduced in England in 1977; the first U.S. version began in Orlando, Florida, in 1985. Waynesville was somewhat of an early adopter, beginning in 1997. After a short interregnum, classes resumed in Waynesville in 2010. Except for a break in 2012, the CPA has been going strong under Ford’s leadership and has graduated 94 students.

Although the class isn’t designed to produce police officers, it definitely gives participants a taste of what life in law enforcement might be like by covering a variety of relevant topics taught by department personnel.

One of them is patrol, from the perspective from the officer on the street.

“Most people are interested in the stories, on what’s happening out there,” said Ford.

Dispatch and 911 operations — “the ears before the eyes arrive,” according to Ford — are also discussed, as are school resource officers.

“A lot of people think that our school resource officers are there to keep the bad guys out,” said Ford. “No. They are they’re working with the kids, trying to keep the kids out of trouble.”

Among the most popular topics with students, though, are the ones they think they know from popular television shows dealing with criminal investigations and forensics.

“They talk about how those are set up, how they progress,” said Ford. “We spend most of that night talking about drugs, because that’s the biggest concern.”

On the administrative side, there’s a class session on internal investigations as well as mutual aid.

“Mutual aid includes chiefs from other areas, and talks about how all the agencies work together, because people don’t realize that they do work together,” said Ford.

After graduation, some, but not all of the students may be considered for volunteer positions with the department. Those volunteers aren’t policing, per se, but when they’re not acting as an extra set of eyes, they’re performing other important tasks.

“They work festivals, direct traffic,” she said. “The half marathon, we covered probably 70 percent of the intersections. We were even cooking burgers at the recovery station. We do block parties, parades, you name it.”

Others help with administrative tasks at the department.

“It’s grown a lot since I started,” Ford said. “We have about 20 volunteers. When I started we probably had five. Each year we look to kind of grow.”

Classes may be as large as 25, or as small as seven; right now, the CPA is offered only once a year, but there are thoughts of offering a condensed two-day version or a session in the summer when seasonal residents can attend. As of press time, there was still plenty of space available, but the deadline to apply is Friday, March 8.

The Waynesville Citizens Police Academy is an eight-week course offered once each year that covers a variety of topics related to policing. The CPA is open to adults 21 and over who are interested in learning more about local law enforcement and meets Thursday evenings for about three hours; many students end up volunteering for the department upon graduation. Space is limited and applicants must pass a background check, but the course itself is free. The deadline to apply for this year’s class is Friday, March 8. For more information, visit www.waynesvillenc.gov/civilian-police-academy-1.