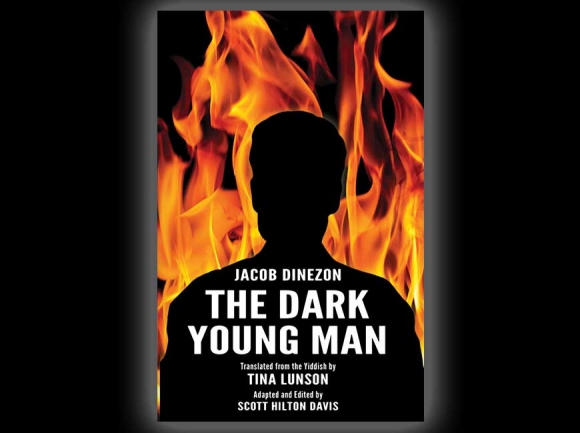 If you’re a fan of Appalachian noir novels (the names Ron Rash, David Joy, Wayne Caldwell, Pam Duncan, Wiley Cash and Charles Frazier come to mind), then Dinezon’s novel of Yiddish noir should be right up your alley.

Set in the city of Mohilev of the former Russian Empire in the 1840s, the opening paragraph sets the tone and stage for what is to unravel in the following 260 pages:

“The hour is late, and all is quiet and dark in the streets. Shops are closed and lamps extinguished, except here and there, where a sliver of light slips through a crack in a shutter or escapes from a small attic window as someone for whom the day is too short struggles to earn a bit of bread, or sits beside a sick patient who hopes to see another sunrise.”

What we have here in The Dark Young Man is a Yiddish Romeo & Juliet. Only in this case, the story’s Tybalt (Meyshe Shneyur) doesn’t die early in the telling, but pervades the dark intricacies of the plotline until the very end as a nemisis and foil for the book’s main male character Yosef, who is a kind, intellegent, well-meaning naive. His female compliment, the lovely young Roza, who is a little more savvy in perceiving personalities, is however chained to middle class Jewish custom and cultural mores of the shtetl towns typical of Eastern Europe at the time.

While the Yiddish and Hebrew words and names can be a challenge for an English-only reader like myself, Scott Davis has done a remarkable job of keeping this book current to its original time frame and culture, while — as Ezra Pound was fond of saying — at the same time making it modern. It rolls along like a Stephen King novel with the dark flares of Cormac McCarthy.

As the story opens we find our Romeo, Yosef, spotting a beautiful girl (Roza) at a family gathering. They talk shyly, but Roza is immediately smitten. But, alas, her father has promised her hand in marriage to another older man. Yosef, meanwhile, is not as quick on the draw and takes probably too much time to realize and declare his love for Roza.

And by then the conflict and the drama is already building with the jealous and greedy dark young man Meyshe Shneyur behind the scenes calling the shots and orchestrating his evil deeds. The family plot thickens as Meyshe fixates on his rise to financial power within the family and with most of his hostilities focused on bringing down his rival for the families inheritance, Yosef.

Midway through the book we get the Shakespearian parallel of Yosef and Roza in their “balcony scene,” exchanging proclamations of love as Yosef prepares to leave — not for Mantua as in Shakespeare’s version — but to St. Petersburg where he has a job waiting for him that will give him the money he feels he needs to marry Roza and provide for their future home and family.

“Roza fell on his shoulder and wept bitterly. ‘Dear Yosef, do you know how many tears and sighs you’ve cost me? Oh, God, what is love? Is it really a flower that only grows on tears and pain? No, Yosef, I can’t let you go. But I know we live in a time when one must be strong. We must put on a smiling face even if our heart is breaking. Go, dear Yosef, if you must, and come back to your Roza.”

What follows are love letters back and forth from Yosef and Roza that are being intercepted by Meyshe Shneyur and his henchmen as a ploy to destroy the bond between the two young lovers. “My thoughts leave me no rest. I must write again today even though I just sent you a long letter and have not heard anything back from you,” writes Yosef.

And after a long polemic on how Jewish writers are ignored and marginalized by Gentiles, the plot thickens further. Without adding a spoiler here to let you know what transpires in the final 50 pages or so — or whether or not it has a happy or a sad endng — I will simply encourage you to read this book, which is described on its back cover saying “A tale of suspense, betrayal, love, and death, Dinezon’s The Dark Young Man is a startling fictional account of mid-nineteenth century Jewish life, cullture, and religion by a beloved author and masterful storyteller.” And I can tell you it is all of these and more.

You can find the book online or through the publisher at www.jewishstorytellerpress.com or through your local bookstore. Kudos to Scott Davis and Jewish Storyteller Press for bringing this beloved book back into our midst.

Thomas Crowe is a regular contributor to Smoky Mountain News. He is the author of The Watcher (Like Sweet Bells Jangled) an historical novel. He lives in Jackson County and can be reached at This email address is being protected from spambots. You need JavaScript enabled to view it.