In pursuit of the moment: Greg Ormont of Pigeons Playing Ping Pong 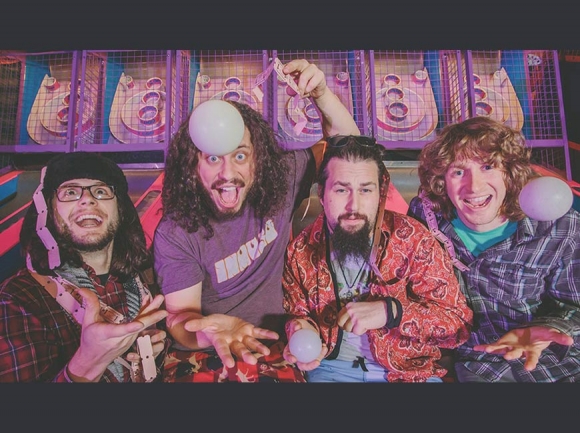 In a day and age where everything that glistens and captures society’s short attention span is seemingly a smoke screen blurring the lines between appearance and reality, one of the most intricate and sacred of human experiences remains pure and untouched — live music.

At the core of the art of musical performance is the idea of improvisation. It’s a moment in the heat of a show where the energy on both sides of the microphone — between the artist and its audience — pulsates in this ebb and flow that circulates and swirls around the event itself.

The notes radiating from the stage are sparked by the feeling of a genuine, unbreakable connection between performer and listener, a subconscious collaboration where the heart and soul of those present dictates the singular rarity of what will ultimately transpire. It’s a flash of splendor like a shooting star if you’re lucky enough to have been present.

Approaching a decade together, Pigeons Playing Ping Pong is at the forefront of what it means to be a jam band in the 21st century. Following in the improvisation footsteps and devil-may-care attitudes of jam-rock pillars like The Grateful Dead, Phish and The String Cheese Incident, the rapidly rising Maryland group adheres to the time-tested formula of the genre: unknown depths of talent + keen improvisation skill set + sense of humor/playful nature + devoted fan base + anything goes stage mentality = jam band.

Smoky Mountain News: Y’all met and formed at the University of Maryland. Can you tell me about those first interactions?

Greg Ormont (guitarist): The first day of college I walked down the hall my freshman year to make friends with my guitar in hand. I had just started playing, and had been singing my whole life, so I figured that was a pretty easy way to break the ice and meet people.

And sure enough, within a couple stops in the dorm rooms, I met our guitarist Jeremy Schon who, so many years later, is still the guy I jam with. We just sat down, two freshmen in college, who didn’t really know a ton of people. We were all trying to make friends and fortunately had our guitars, and enjoyed it.

That spread to playing coffee shops together, duet gigs with two acoustic guitars, and eventually we found a drum kit on campus. The home the drums were set up in, that house contained our bassist who just walked downstairs and we started jamming. When we added that bass element, all of a sudden, we stumbled ourselves into being a band.

SMN: For being so well-known as a live act, how do you approach the studio and harness that energy away from a live audience?

GO: Well, I’ve been joking around that we should bring in some oculus virtual reality goggles into the studio and put ourselves in that wild, high-energy live setting. But, it would be hard to see your guitar, so I decided against that.

It’s an interesting balance between keeping everything polished, while replicating that live energy that we love so much, that’s our bread and butter. That’s the thing about playing live, there’s nothing like it. When you’re recording in the studio, it’s not going to be as genuine as the adrenaline you’re receiving from a live show. Each album [of ours] is a little more energetic and more similar to our live setting.

SMN: What is the place of jam-rock act in the digital age?

GO: We’re all kind of in the Spotify world, whether we like it or not. We love Spotify. It’s given us the ability to reach so many fans not only regionally, but internationally. And we’re navigating our releases, whether or not we should put live recordings on Spotify versus other platforms like Nugs.net.

You want everyone to hear your best stuff, and sometimes your live shows have a ton of great energy and natural moments, and maybe along the way there’s a tiny flub. And to a musician, it’s like nails on a chalkboard — you can hear it [even if the listener can’t]. Some of the bands are hesitant to put something like that on Spotify. So, that’s a conversation we have a quite a bit — improvising and then doing something with that audio in this digital world. I tend to lean towards putting more music out there.

SMN: But, in the genre of music you’re in, that’s part of the risk, part of the agreement you have with the improvisational gods…

GO: Yeah, it’s part of the risk. And it’s part of the reward. You’ve got some really exciting stuff and the question becomes should that moment be encapsulated and saved through the test of time or was it a fleeting live moment? Which is part of the beauty of jam music, too. That’s why you go to the concerts instead of listening to the tapes, because it happened there. And being there is that one spontaneous moment that comes and goes. And what you do with it is up to you, but it has to be experienced.

Editor’s Note: If you would like to stream the entire audio of this conversation, go to YouTube and search: “Greg Ormont Garret K. Woodward.”

Pigeons Playing Ping Pong will perform at 9 p.m. Friday, Feb. 1, at The Orange Peel in Asheville.

Tickets are $20 in advance, $25 day-of-show. Asheville-based funk/rock act The Fritz will open the show. For more information and/or to purchase tickets, visit www.theorangepeel.net.