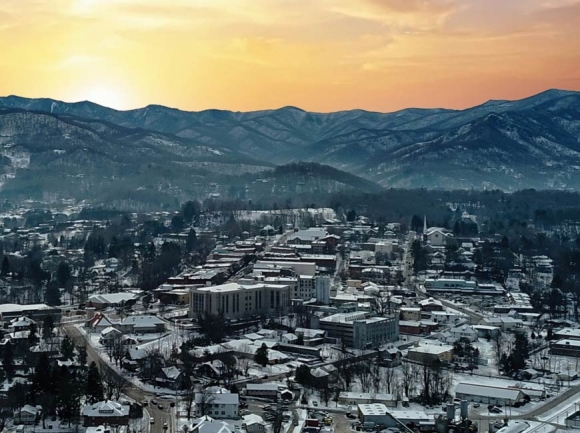 Sunrise over Waynesville. A Shot Above photo

The organization charged with maintaining and revitalizing Waynesville’s downtown core is setting an ambitious plan of work for 2019, to an extent not seen since the major streetscaping projects of the late 1980s-early 1990s.

Phillips’ comment came after a Jan. 22 strategic planning retreat during which DWA board members took a hard look at weaknesses in and potential threats to Waynesville’s prosperous Main Street corridor.

Limited overnight lodging and a perceived lack of parking — along with a growing homeless population — add to what’s been called a negative view of downtown by locals, who see it as too crowded and don’t want what merchants are selling there, anyway.

But low vacancy rates and lots of cooperation from town staff still make Waynesville an appealing place to live, work and play, and if the DWA has its way, more significant projects could be on the horizon, not just the upgrade of trash cans and floral planters.

During the retreat, North Carolina Main Street Coordinator and meeting facilitator Sherry Adams said that most visitors to Waynesville, including herself, don’t see Frog Level as a separate entity — to most, it’s Waynesville. Building a proverbial bridge to and from the block-long district is a natural direction for growth, according to Adams.

“We have always worked together, and as we grow they continue to grow as well,” Phillips said.

Many businesses on the east side of Main Street have rear entrances on Wall Street, which has languished as a somewhat run-down, underutilized commercial thoroughfare, but Phillips cited forthcoming improvements to pedestrian area landscaping, as necessary for further development.

“I think it’s already improving some,” she said. “From the Wells Events Center on that end, to The Strand and Boojum (Brewing) on this end, I see more and more happening.”

The main focus, however, has always been Main Street; property owners in the municipal service district pay an extra 20 cents per $100 in assessed property value, which largely funds the DWA.

This year, Phillips said she’s looking forward to a renewed focus on one of downtown’s most overlooked features — the miniature park on the corner of Depot and Main streets.

“We encourage people to use that,” she said. “There are several tables and chairs. I know we’ve talked about a chess table, and that’s one of the things that might happen sooner rater than later.”

Phillips said there’s one more accent, just off Main Street, that she’d like to see come to pass — better utilization of the green space between the Justice Center and the Historic Courthouse.

“When the Justice Center was built, there was discussion about trying to add that feature,” she said. “It certainly would be a nice area for a speaker series, or for more musical opportunities.”

The bowl-shaped grassy area slopes down gradually to a drainage grate, but could play host to a small amphitheater or other such performance space; the breezeway behind the space is already used for Fourth of July performances, but bringing the music out closer to the action on Main Street would remind people that there is, in fact, a substantial green space in the heart of downtown.

“I don’t think this will happen quickly,” she said. “We’ve discussed it for the past couple of years, but maybe with some grant options and maybe some people working toward that on our committee, we’ll be successful.”

Phillips is one of just two full-time employees at the DWA; of the organization’s $190,000 in annual expenditures, salaries, including Phillips’ $54,000, account for almost half. Aside from property tax revenue that amounts to about $86,000, the rest of the DWA’s budget comes from vendor fees and events along with donations, like its donated office in Waynesville’s Town Hall.