Out in the open: Steep Canyon Rangers to play homecoming show 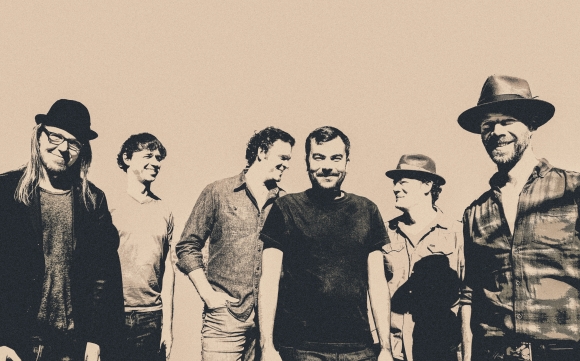 Banjoist/singer for the Grammy-winning Steep Canyon Rangers, Sharp is part of one of the marquee acts in string music today. The Western North Carolina group isn’t bluegrass. It isn’t Americana. It’s isn’t folk or indie, either. It’s all of the above, which is something Sharp and his bandmates have purposely set out to present to the listener.

With the acclaimed 2018 album, “Out in the Open,” the sextet painted a clearer picture of where they’re headed — anywhere they want, to be honest. The songs felt a little more laid back and free-flowing than in past releases, where the musicians simply went wherever the creative energy of the lyrics took their instruments while recording live in the studio — a signature approach of “serving the song” that remains at the core of the Rangers unique sound and steadfast attitude.

And this year marks a decade that the Rangers have collaborated with the legendary Steve Martin. The comedian, actor and musician has traveled the globe with the Rangers backing his variety show alongside fellow funny man Martin Short. Between sold-out performances seemingly every night to national television appearances, it feels like the Rangers are only getting started as the ensemble approaches 20 years together.

Smoky Mountain News: Where are the Rangers right now? You had a pretty banner year…

SMN: Does that mean that you’re trying to be aware of the health and identity of the band?

GS: Yeah, totally. I think it’s time to restamp our identity on the public’s consciousness. Because when we started with Steve, we were a traditional bluegrass band. And that’s how a lot of people got to know us. Over the years we’ve changed, but we’ve been so damn busy doing those shows [with Steve].

GS: Yeah. It’s amazing. Steve’s part of the band now — he’s our boy. It’s been a hell of a ride, and we’re not stopping playing with Steve by any means. Steve will be the first one to say, “When y’all need to do your own thing, do your own thing.” And he’s said that for a while. Next year we’re going to take his advice and do it. I think it would be a good thing for all of us to kind of step away from it for a little bit. I remember vaguely what it feels like to have your band working multiple times a week. Earl Scruggs said at one point, “You’ve got to be playing together five times a week to sound like a band.” And we haven’t done that in years — it’s going to feel good. It’s weird to say, after you’ve been doing it long as we have, that this year is critical for the band — but, I think it is.

SMN: So, on the flip side of that, you’re coming up on the 20th anniversary of the band...

GS: It’s been crazy, man. It’s a hell of an achievement. It’s hard to keep a band together 20 years, especially with as solid of a lineup as we’ve had. We were talking as we’re approaching this next album — songs, the music — and people are more excited about it now as we’ve ever been. And I take that as a really good sign, when people are willing to actually spend their time to think about stuff, working on stuff, and bringing stuff in.

GKW: But, the band has always remained elusive, in terms of being labeled. Is that subconscious or conscious?

GS: I think it’s subconscious. You know, there was a while there, early on, where we were focused on being able to go to these [bluegrass] festivals. The whole thing was, how do you put a set together to be able to perform in front of Doyle Lawson or the Lonesome River Band? At that point, we were like, “How do we do this?” And you see things shift. Ten years ago, [bands were] still catching the wake of [the film “O Brother, Where Art Thou?”] and a lot of the world of Americana music had that bluegrass tinge to it. And now, it’s soul music that’s the touchstone of that world. It’s always moving. Musicians and bands are human, you react to what you hear a lot. You’re always a product of your influences. For us, it’s not worth it just to have something that sounds like a good bluegrass song — it’s got to stand on its own no matter what settings it’s in.

Editor’s Note: If you would like to listen to the complete audio of this conversation, go to YouTube and search “Graham Sharp Garret Woodward.”

The Steep Canyon Rangers will perform at 8 p.m. Saturday, Jan. 19, at the U.S. Cellular Center in Asheville.

Tickets start at $27.50 per person. Americana/indie-rock act Hiss Golden Messenger will open. For more information and/or to purchase tickets, go to www.steepcanyon.com. VIP upgrade are available. If you have any questions about the upgrades, you can all the box office at 828.259.5736.