This must be the place: 'So, I’d give this world, just to dream a dream with you’ 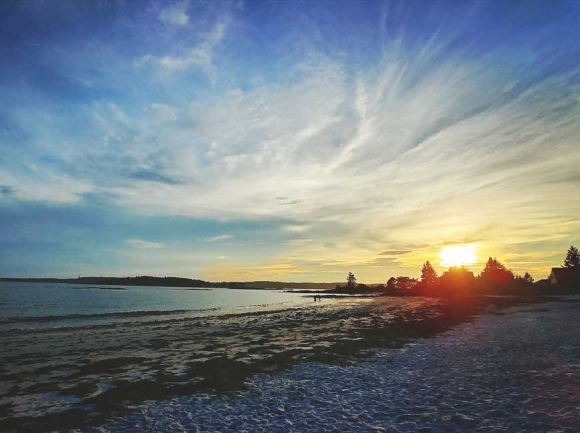 For someone as sentimental as I am, New Year’s Eve always seems to resonate the deepest. The idea of leaving behind an entire year — of beautiful highs and staggering lows — only to seemingly trade it in for another 12 months, a fresh canvas by which to once again try and paint your vision into a reality.

I never know where I’m going to be when that brightly illuminated ball in Time Square drops. Most of us don’t, truth be told. But, we know when the clock strikes midnight, wherever we end up, we won’t forget the faces or places within grasp. You never do, seeing as Dec. 31 remains the one single day that we all take a personal inventory — of where we came from, where we are, and where we’re headed.

When I was a kid, New Year’s Eve was usually spent in the living room of my childhood home. This old 1820 limestone farmhouse in Upstate New York. My father, an immigration officer on the Canadian border, would work those holiday shifts seeing as it was time-and-a-half if he did so. He never really was the celebratory type when the holidays rolled around anyhow. Thus, my little sister, my mother and I would normally hang out in front of the TV with hot cocoa and some cookies, ringing in the next chapter of whatever the calendar on the wall stated.

At 16, my riff raff cronies and I crammed into my folks’ minivan and took off to “First Night” across Lake Champlain in Burlington, Vermont. My friends all brought their girlfriends, while my high school sweetheart was back at her home, seeing as her father disapproved of her spending the night away, with her boyfriend nonetheless. We watched the fireworks streak across the lake, curious thoughts of whatever things we pondered in high school.

But, the following year, she and I watched the ball drop at a friend’s lake house on a frozen pond in the snowy depths of the Adirondack Park. Even at 17, I felt such an intensity of that “moment” when 11:59 p.m. becomes midnight. It’s the old soul in me. In that transition, you really feel time passing you by, a fleeting second to sit and reflect while the other 364 days a year whirl by without notice mostly.

Once you’re able to run around the bars and nightclubs legally, you tend to hatch such grandiose plans of having the most “epic” time ever. But, time and time again, plans always seem to fall short and expectations never get met. This usually is a result of appearance versus reality.

Life isn’t like those overzealous romantic comedies or National Lampoon’s euphoric madness, those films that create such incredible heights of fun and adventure, surely you think as a member of the general public that you can follow suit. That said, I think we’d all like to one day find the ending of “When Harry Met Sally” as something tangible in our midst.

These days, I find myself more like a “Water Witch” (aka: diviners) — on New Year’s Eve, and life in general — where I go in the direction of the energy surrounding me, always in search the of bountiful waters of salvation. I lay low ‘round the holidays, scoping out the landscape of wherever I am at the juncture of Dec. 31, pulling the trigger on a rough sketch of a plan somewhere between the first and second cup of coffee.

When that ball drops in Times Square, the whole world is watching. And I think that’s the key, at least more so one of importance in our 21st century world of instant gratification, endless priorities and constant distractions. It’s crazy to think in all of this organized chaos, we all just simply stop for one second to admire the view — of life, the world, and your place in it.

There have been numerous New Year’s Eve gatherings where I found myself on all kinds of wild goose chases: Manhattan to find a girl I liked, only to finally end up in her arms just as the sun came up over Central Park; Asheville during a snowstorm when the car got towed after a concert, only to pass out on a friend’s couch until we could pay the fee to get it out of impound the next morning; Lake Placid awaiting my girlfriend to get off work at the local brewery, so I could finally give her a New Year’s kiss.

I highly doubt I’m alone in all these random and haphazard New Year’s Eve exploits. I think we’ve all been in similar situations. Probably will be once again this time ‘round, too. Who knows, eh? Roll the dice and see where the chips may fall. Only thing you can control in this universe is your reaction to whatever is thrown at you. So, hoist the champagne high and toast one another. We made it another year on this hurtling rock through space. Onward and upward.

Whatever the case, here’s another New Year’s Eve rapidly approaching, only to vanish in the blink-of-an-eye. In coming hours, the literal and figurative sun will set on 2018. And, before you know it, 2019 will be here in all its unknown glory and wisdom.

1 Pianists from around Haywood County will gather for the “Keyboards After Christmas” performance at 6 p.m. Sunday, Jan. 6, at the First Baptist Church in Waynesville.

3 The Founders Brewing “Beer Dinner” will be held at 6:30 p.m. Monday, Jan. 14, at Mad Anthony’s Taproom & Restaurant in Waynesville.

5 ”What was the most important event of 2018 and what are your predictions for 2019?’” will be the topic for the Franklin Open Forum at 7 p.m. Monday, Jan. 7, at the Rathskeller Coffee Haus & Pub in downtown Franklin.