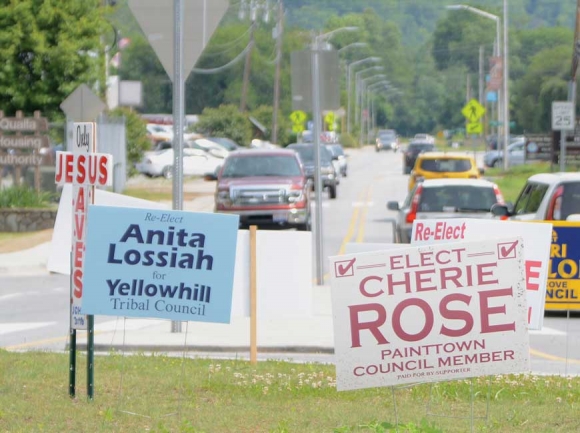 Discussion of revisions to the election ordinance began after a disputed election and subsequent investigation following the 2017 Tribal Council race for Birdtown. Holly Kays photo

After months of work sessions, tabled votes and debate, Cherokee has an updated election law.

The Cherokee Tribal Council passed the 36-page document during a special-called meeting Wednesday, Dec. 19, after tabling the vote in the regular Tribal Council session Dec. 6 at the suggestion of Councilmember Bo Crowe, of Wolfetown. Crowe said he wanted the vote delayed until an evening public comment period could be held.

By Dec. 6, the clock was already running down on the deadline to complete the ordinance. The original law forbade any changes between Oct. 1 and Sept. 30 in years when an election would take place, which would have prevented Tribal Council from passing an updated version after Oct. 1 of this year. But council members passed an amendment to the law changing the period to start Jan. 1 instead, giving themselves to the end of the year to finish the job.

After the Dec. 6 meeting adjourned, however, there was no word on when the public comment session and subsequent special session to pass the law would be held — until 11:51 a.m. Monday, Dec. 17, when Tribal Council announced via Facebook that it would hold a work session on the law the next day beginning promptly at 9 a.m., with a public comment opportunity the same evening from 6 to 8 p.m. The announcement was too abrupt to allow for advertisement in local newspapers or other media, eliciting criticism from some tribal members.

“It was (not) put out to the people in the proper manner,” Big Cove resident Lori Taylor told Council Dec. 19. “When you talk about it being rushed, it was rushed. The people were rushed.”

The election ordinance issue didn’t just pop up overnight, however. Issues with existing election laws have been in the public spotlight since the September 2017 elections, which involved a disputed outcome in the Birdtown township, a runoff election, a lawsuit that landed before the Cherokee Supreme Court and an investigation that resulted in allegations of ballot tampering. Tribal Council has been discussing a revision to its election laws since the spring.

The new law, which passed Tribal Council with a 75-19 weighted vote and was promptly signed by Principal Chief Richard Sneed, contains quite a few changes from the previous law and several significant differences from the draft version originally placed on the Dec. 6 agenda.

The enacted version changes the dates during which changes are allowed back to the original Oct. 1 to Sept. 30 window, strikes a change that would have allowed incarcerated people to apply for absentee ballots and gets rid of a whole proposed section that detailed exactly how certain offices should be filled in case of a vacancy.

The new law also limits the recordkeeping required of the Board of Elections. The previous law had stated that the board “shall keep a tape or written record of all board meetings.” The new version says that the board must keep both a tape recording and a written record, but only of meetings “at which evidence is received or a vote taken regarding a protest filed with the board.”

Also notable is what is not in the law. During a July work session, council members extensively discussed a new section that would govern campaign finance — Cherokee has no laws pertaining to campaign fundraising, finance reporting or other related issues. The version discussed at that time would have required candidates to file monthly finance reports detailing the name, mailing address and occupation of each contributor for any donor giving more than $250. No one person would be allowed to give more than $2,000 to a single candidate.

However, in the enacted law that section is absent, an omission that Sneed criticized in his comments following the final vote.

“Until there’s language in there for financial accountability, our elections are up to the highest bidder,” said Sneed. “It astounds me that we don’t have that in there, that the community at the county level, at the state level, at the federal level, if you’re running for office you have to disclose who’s funding you’re campaign.”

Perhaps the most-discussed change in December was an amendment that would have prevented Tribal Council from overturning any law enacted through a referendum vote. The language in the draft legislation stated that decisions made via referendum could be overturned only through another referendum.

However, Attorney General Mike McConnell said during the Dec. 19 special session, that provision would present legal issues in terms of consistency with the tribe’s highest law, its Charter and Governing Document.

“It is 100 percent right to respect the wishes of your constituents to try to represent them in here in the council chambers, and as everyone pointed out referendums, if it passes they come with such weight nobody wants to go against a referendum,” McConnell said. “But to say in law that you cannot is wrong. It’s against the charter.”

That’s because Section 23 of the charter states that Tribal Council is “fully authorized and empowered to adopt laws and regulations” to govern the tribe. In McConnell’s view, preventing the body from changing laws enacted by referendum would “hamstring” that authority.

“This one amendment will tie our hands in making laws in the future or future councils making laws to govern this tribe, and that’s what we’re elected to do,” said Wahnetah. “At this time I cannot support this resolution unless this amendment is removed.”

Wahnetah said that he wasn’t looking to weaken the power of referendum votes and would be willing to look for other ways to strengthen their authority, but that he thought the draft as written would prevent Tribal Council from fulfilling its role under the charter. A tribal law preventing the same question from going out on a referendum within two years if it should fail will remain in place.

Tribal Council ultimately sided with Wahnetah and McConnell, but two tribal members in attendance stated their skepticism of the move. In recent years, referendums have dealt almost exclusively with alcohol-related issues. Despite a growing push to capitalize on the potential economic opportunity breweries or a tribally owned liquor store could afford, for a variety of reasons there is widespread opposition among tribal members when it comes to loosening alcohol laws. A referendum question on the issue put forward last year failed to draw the required percentage of voters to be effective, and the majority of those who did vote voted against the proposed measure to allow a tribally owned liquor and beer/wine store.

“Yesterday when you were discussing those referendums, one of the things we also found in our research is that the last referendums we have had since 2009 have been alcohol,” said Yellowhill resident Missy Crowe.

“What it boils down to is the decision of alcohol on this tribe, and that’s been the decision for many, many times,” Taylor agreed. “Look at the referendums. Give me one instance when a referendum did not pertain to that.”

Councilmember Bo Crowe, of Wolfetown, also brought forward a proposed change Dec. 19, though that amendment was ultimately shot down. Crowe wanted to give Wolfetown and Snowbird/Cherokee County two representatives on the Board of Elections where other townships have only one. That’s because those two townships have two polling places rather than the single polling place present in other townships. Other councilmembers pointed out that the number of polling places shouldn’t impact the number of board members, because each polling place has its own elections judges in place.

However, the discussion did spur several councilmembers to express their reticence about the law as a whole. The fact that multiple significant amendments were being brought forward at this eleventh-hour meeting was proof enough that the draft was not ready to become law, they said.

“I struggle with this,” said Councilmember Lisa Taylor, of Painttown. “I’ve read it, I prayed and at this time I just can’t support it until we get it right. We’ve switched some things around in it and I just feel at this time it needs more work.”

In particular, French criticized the shifting definition of “election period,” saying, “We can’t keep jumping dates just to please one another.” He moved to kill the legislation.

Councilmember Boyd Owle, of Birdtown, spoke out against that action, however. He said that Tribal Council had spent too long working on the law to throw it away completely.

What’s in the ordinance?

The new ordinance contains quite a few changes from the law that has previously governed Cherokee’s elections. Those changes include:

• Being more than 90 days in default of a debt to the tribe will result in ineligibility to run for office.

• People protesting or appealing an election result or an election board decision to disqualify them from a run for office will have to pay a fee before filing a protest or appeal.

• The Election Board is required to keep records of its meetings only when those meetings involve receiving evidence or voting on a protest. However, at meetings when those activities take place the board must keep a tape recording and a written account of the meeting.

• In addition to ballot recounts requested by candidates who qualify based on the margin of the election outcome, the election board will have the ability to recount ballots from any election of its own initiative.

• The definition of “election period” is once more the period from Oct. 1 to Sept. 30 in a year when an election is held. The election ordinance can’t be amended during that time period.

• The election board can hold a run-off election for a seat if it determines that election irregularities affected the election’s outcome or rendered the results unreliable.

• Security cameras recording audio, visual or both will be required to run in polling places when voting is taking place, with records preserved for at least one year.

• The election board will have the power to decline hearing protests if it feels it can make an informed decision based on the written protest and supporting materials.

• Anybody representing a person who is making an argument at an election board hearing will have to comply with Cherokee law regarding law practice on the Qualla Boundary.

• Election board members will be required to take an oath of office.

• Anybody making a false statement while under oath at an election board hearing can be prosecuted for perjury.

• A new section of the election code specifies unlawful campaign practices, such as buying or selling votes, tampering with ballots, falsifying voter registration, intimidating others to influence an election result, voting more than once in an election, marking another person’s ballot or campaigning within 100 yards of a polling place.

• The election board will be required to have a secure office with working security cameras and keys and codes available only to “authorized personnel.” Access to the offices will be logged remotely to allow for review of who has been in and out of them.

• Poll books will be required to be reconciled and verified daily by two election board members.