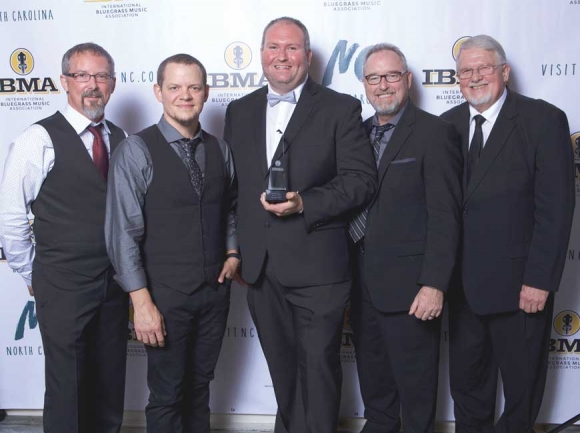 Buddy Melton, (from left) Caleb Smith, Darren Nicholson, Tim Surrett and Marc Pruett at the 2018 IBMA award show in Raleigh this past September.

For a group that’s seemingly received every IBMA honor possible (13 total) since its formation in 2007 — including another “Male Vocalist of the Year” (Buddy Melton) and first-time “Bass Player of the Year” (Tim Surrett) in 2018 — the Haywood County act has all but secured its legacy as one of the finest bluegrass ensembles of the modern era. But, the work is never done. Not for Balsam Range, at least.

Letting “Aeonic” unfold, the album seemingly stretches out more than past releases, where there’s delicate space within the melodies for reflection and contemplation — something hitting a little close to home for Balsam Range, who now look to the horizon for the next step of creative inspiration as it enters another year atop the mountain of that “high, lonesome sound.” 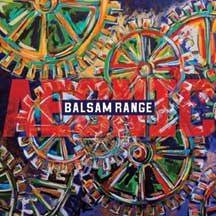 Smoky Mountain News: In essence, “Aeonic” means “to last a long time.” What’s your interpretation of that word when applied to Balsam Range, and also the significance of that specific term being chosen as the title?

Buddy Melton (fiddle): “Aeonic” is a symbolic album for Balsam Range. The same five original guys over a decade of creating music and traveling the bluegrass trace together. That’s not typical in the music business, and I’m very proud of that. The artwork for the cover fits that overall theme as well. The gears represent continued movement together, when one gear moves they all move in a well running machine. “Aeonic” also represents the continuation and enduring of our musical form as well.

Tim Surrett (bass/dobro): I think that it’s just the fact that we have been together a long time already, and we hope and think that there is a lot more to come. Also, we want to make music that will hopefully stand up to the test of time after we’re gone.

SMN: Following your second IBMA “Entertainer of the Year” award, where is the band right now? Is there a chapter that has closed with that award, perhaps securing the legacy of the band? And, if so, what chapter is now opening up?

TS: I hope that our legacy is set now, but I don’t see anything as closing. We just try to keep it simple and just make good music and give good performances. It’s a sports analogy — just keep getting better.

Caleb Smith (guitar): “Entertainer of the Year” the first time around was a shock to me, then to have it happen a second time, and with no new music out was mind blowing. It’s a very humbling feeling to know that your peers have voted and chosen you. It tells me that people still like what we do and that’s a great feeling. To me, we’ve had fun, worked hard, tried to make good original music, and hope folks like it. That’s ultimately the new chapter that we strive for — to keep finding and creating good original new music to share with whoever will listen and hope they enjoy it.

SMN: Usually, when you reach the top of the mountain of your dreams, you tend to see other mountains in the distance worth climbing. As you currently stand atop bluegrass, what else are seeing from that vantage point?

Darren Nicholson (mandolin): It’s a lot of pressure to do our best to represent ourselves, bluegrass and Western North Carolina the best we can. We’re sort of flame keepers of mountain culture, and we want to share that — making the best music we can and making people happy through music.

BM: It’s about continuing, looking forward and setting new goals. There’s always a desire to go to new places, try new things and meet new people — all while maintaining the many wonderful connections we’ve made along the path.

SMN: Bluegrass has always been a moving target when it comes to “what is” and “is not” that “high, lonesome sound.” But, it seems the changes are rapid in recent years, with big name groups, including yourselves, looking more to “serve the song,” rather than just make sure something fits in a traditional formula. Do you see that change? And what does that mean for the next phase of this music we hold so dear?

TS: For us, we just play the songs the way that we can play. We love the traditional hardcore bluegrass, but we don’t feel compelled to play only that. I love all kinds of what is called “bluegrass” these days. The newer music is a conduit to the original music. That’s why I think the original stuff will always be relevant.

BM: Change is inevitable in anything. The first generation of bluegrass players were creating something new at that time. There will always be those who desire to pay homage to the traditions and those who strive to create new variations — it all has a place and an eager listener awaiting.