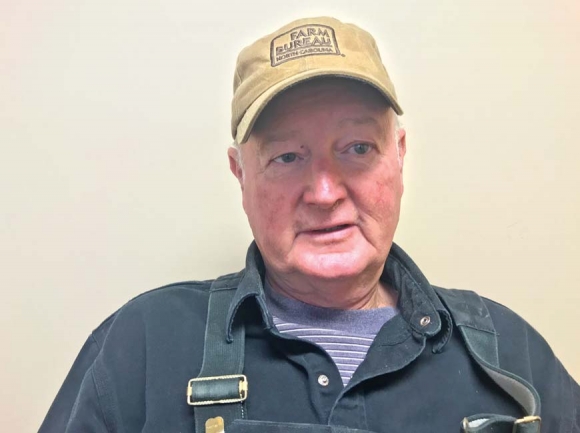 Local farmer Don Smart has been involved with the Farm Bureau for almost his entire life. Cory Vaillancourt photo

American agriculture is experiencing a tougher time than ever, and that includes farmers in North Carolina. But as the latest version of the Farm Bill awaits President Donald Trump’s signature after passing through Congress, apparently there’s not a lot of help coming.

“The most important thing was, it was passed this year in this lame duck Congress before this Congress adjourns, so there’s some certainty as farmers make plans for 2019,” said Linda Andrews, national legislative director for the North Carolina Farm Bureau.

About 80 percent of the farm bill — first launched in 1933 as part of President Franklin Delano Roosevelt’s New Deal and periodically renewed every five years or so — deals with the food and nutrition program known as SNAP, or the Supplemental Nutrition Assistance Program.

Although SNAP does, in the end, help American farmers, processors and retailers, it’s the remaining 20 percent of the bill that’s directly relevant to them.

Direct subsidies to America’s farmers are a thing of the past, Wooten explained, but about 50 percent of the premium that farmers pay on crop insurance is subsidized through the Farm Bill.

“That’s the biggest help to our farmers that grow row crops is crop insurance, which is a safety net for farmers,” he said. “That’s what the whole farm bill or commodity title is designed to do, is to help our farmers during times of low prices, like now.”

Don Smart with his brother farms about 1,500 acres in Haywood and Madison Counties in North Carolina, as well as in Cocke County, Tennessee; he’s been associated with the Farm Bureau for 45 years and currently serves as the Haywood County chapter’s president.

“We run a 150-cow dairy,” Smart said. “We did grow about 60 acres of tobacco, we grow tomatoes and beans, and grain corn and soybeans, and we keep some beef cattle.”

Dairy, especially, has become a difficult industry to be in, according to Smart.

“The profit margin’s so small today, there isn’t much room for error, so you better be good at what you do. Milk is running out the store windows cheap. Dairy farmers are going broke. We’ve got about five dairy farmers left in the county,” he said. “We don’t know how much longer we can stay in the dairies because the price of milk is about $15 a hundred [pounds] and the cost to produce it is about $20.”

Troubles aren’t limited just to cattlemen — overproduction of crops means “someone’s going to have to go home before it gets better,” according to Smart, and the farm bill does nothing to address that concern.

In the 1970s, Smart explained, cheap and plentiful labor was streaming over the border, but that’s not so much the case anymore. The Farm Bill is largely silent on the matter.

“Don Smart is absolutely correct,” said Wooten. “One of the biggest issues facing farmers right now is lack of available labor. We need this immigration system fixed in terms of a workable guest worker program for American agriculture. It’s a federal issue and the Congress ought to fix it. They ought to get together and quit using it as a political football.”

Wooten added that American agriculture has lost 47 percent of its net farm income just since 2013 and that this year, net farm income is expected to drop about 13 percent over 2017. Part of that, he said, is due to Trump’s tariffs.

“Tariffs hurt American agriculture,” he said. “A trade war always hurts American agriculture first. Agriculture is always at the point of the spear. It’s always the first to get hit and pays for the sins of the other sectors involved. We are currently paying for the steel and aluminum industry, which was where the administration was headed in the beginning.”

One bright spot in the $867 billion, 10-year bill is the lifting of prohibitions on industrial hemp, but it’s probably not going to be the savior of the American farmer if it’s plagued with overproduction, low prices and high labor costs.

“It’s too early to say right now,” Wooten said. “The real buzz on the hemp is in the oil, the CBD oil, and that can be very quickly overproduced. Right now, we’re not seeing a tremendous push for the hemp fiber to be used in a lot of products, even though it can be.”