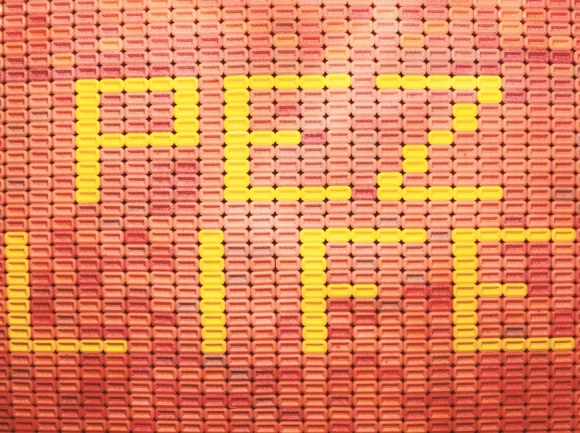 Somewhere on the outskirts of Cleveland, Ohio, about 18 months ago, Waynesville resident Peg Harmon — who notes her first name is just one letter away from “Pez” — experienced the power of one tiny candy in bringing people together.

Harmon was attending the Pezamania 27 convention, billed as the world’s largest gathering of Pez collectors, when fate interceded.

“My husband and I had gone a couple of times,” Harmon said, “and in 2017 the convention host who we had met many times saw our nametags and they said ‘North Carolina,’ so he asked, ‘Which part of North Carolina?’ We said Waynesville, and he grabbed my hand and walked me over to JoAnn and Steve and introduced me to my neighbors.”

JoAnn Pillifant and Steve Baker live just minutes from Harmon, but were completely unaware that they shared her unique passion for the ubiquitous plastic candy dispensers.

“What it is, is a gathering of ‘Pez heads’ — people that collect Pez — and it’s kind of like a family reunion,” said Baker. “You go a year or two, you remember people you talk to, people you email and see on Facebook, and you get to know the person, and you develop a lot of close personal relationships and then you find out somebody’s in your back yard.” 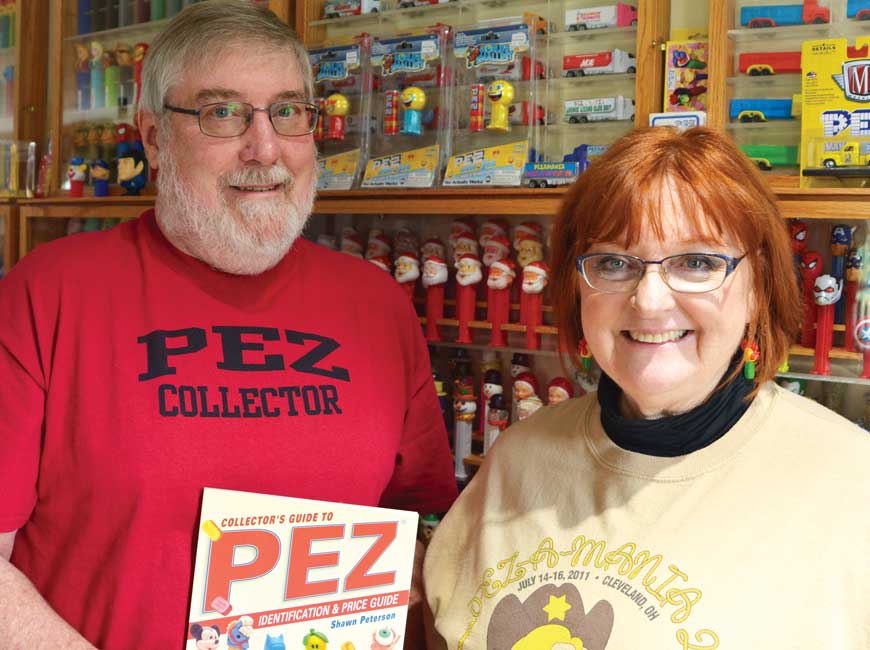 Steven Baker (left) and JoAnn Pillifant have more than 3,000 unique Pez dispensers in their collection. Holiday characters like Santa Claus (below) and the Easter Bunny have long been popular on Pez dispensers. Cory Vaillancourt photo Born into a “family of collectors,” Baker began collecting Pez dispensers more than 20 years ago.

“I’ve collected things my whole life,” said Baker, who also has an impressive collection of comic books and sci-fi memorabilia. “Pez was one of those things that I had when I was a little bit younger, and then I discovered something else and lost my way with Pez, and then maybe about 15 years ago, the new Star Wars came out, and people started to give me Pez.”

Baker introduced Pillifant to the hobby when they began dating about 13 years ago; her grown children joked that she’d joined a cult.

“I would get Pez gifts as a child and eat the candy and throw the dispenser away,” she said. “How crazy is that?”

Turns out, it’s not really that crazy — Pez is short for “pfefferminz,” the Austrian word for peppermint, and initially they closely resembled Altoids; sold in palm-sized tins as an anti-smoking aid for adults, the tiny candies were invented in Vienna in 1927 long before the whimsical modern dispensers were even a thought.

When the tins were canned and the dispensers were first created, they resembled Bic lighters. With the advent of the Second World War, sales of the Austrian-made Pez products dropped dramatically in western countries, but when the war ended and sales resumed, the products still weren’t all that popular in the United States.

“When they came to the U.S. in the early 1950s, they had a lot of trouble marketing them, because Americans were heavy smokers at the time, and nobody was really trying to quit,” Baker said. “So what they did is they looked around and decided to adapt this adult item for children, so then they started putting the heads on them.”

Baker said there’s “room for discussion” on which were the first characters to be featured on the dispensers.

“It’s been generally decided that Popeye and Casper the Friendly Ghost and Mickey Mouse were the first three, and then Santa Claus came out and then as the years went by, a huge number of Christmas-related, holiday-related seasonal ones came out,” he said. “The Easter bunny, and then Halloween with witches and pumpkins and skulls and all that.”

Since then, more than 1,500 different characters — or objects, like fruit — have been featured atop the slender stems that still resemble the lighters after which they were first fashioned. Factoring in minor variations of both head and stem color, Baker says he thinks there are between 5,000 and 10,000 different dispensers in existence today.

Many of those can be found at conventions like Pezamania, which takes place again next July.

“It just opened up a whole new world,” said Pillifant of Pezamania. “What happens is, it becomes a vacation for some people and they start coming earlier and earlier.”

Check-in is on Wednesday, but people show up as early as Monday to buy, sell, trade and bargain for rare and sought-after pieces. Most years, about 500 people attend the convention, but sometimes that number tops a thousand.

Before the official kickoff, conventioneers begin “room hopping,” or setting up displays in their hotel rooms so others can peruse their wares. As the event progresses during the week, it culminates in a large dealer showcase in the ballroom that is open to the public, and also raises funds for Gliding Stars, a Toledo-based adaptive ice skating charity. 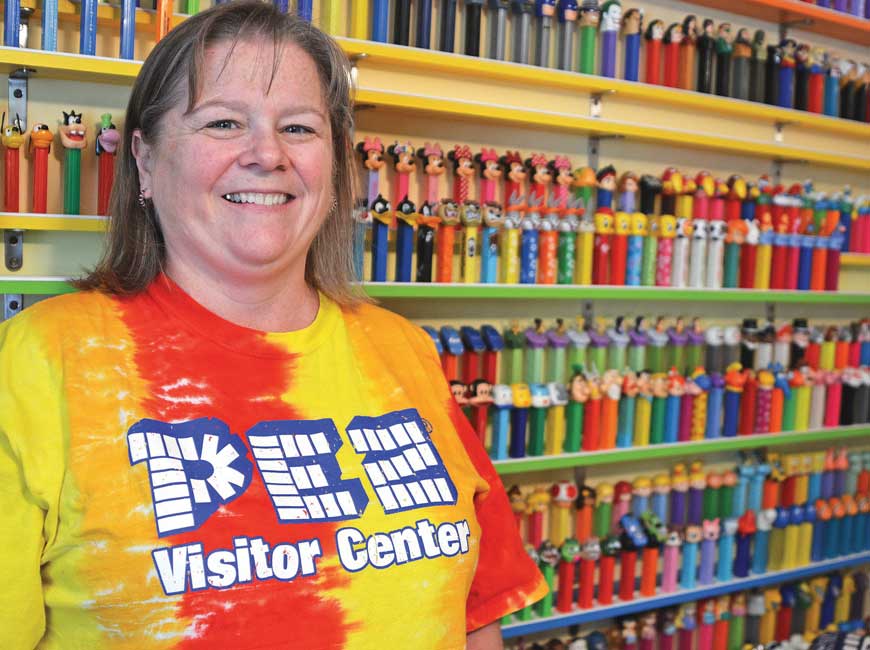 Harmon said her 20-year hobby has resulted in a substantial collection.

Baker and Pillifant’s collection hovers around 3,000 unique pieces, but is likely closer to 5,000 including duplicates.

“One of mine, a soft-head Penguin from the Batman series, a book says it’s worth $250,” said Pillifant. “I also have a Little Orphan Annie that’s worth about $100.”

But, devotees of the hobby still cite its accessibility; dispensers are sold at retail for just a couple of bucks, and even rare or vintage dispensers can be acquired for very little money, but some pieces are worth more than most automobiles.

“There’s the JFK donkey,” said Baker, referring to a rare, specially-crafted piece made for President Kennedy in 1961. “I’d say it’s probably in excess of $20,000.”

With some pieces fetching hundreds or thousands of dollars on the open market, it’s wise, said Baker, to be vigilant when shopping.

“Like any type of collectible, there’s people out there that will try to scam you,” he said. “One of the biggest scams is stem swaps — you put a stem with a head that was never officially put together with that head. Lots of times, it’s older Pez, they’ll try to say it’s a prototype or rare one, when in reality, it’s not — it’s just somebody trying to make a buck off somebody.”

Of course, the hobby features various newsletters and price guides for the uninitiated, but experience and expertise are plentiful at conventions like Pezamania.

“Respected vendors who have spent a long time in the industry, they could look at it and tell you right away,” Baker said of attempts to deceive buyers.

Some of the oldest dispensers are called “footless” or “no-foot” because the dispenser has no base; those were followed by what are called “thin-foot.”

“That happened probably in the late 1970s,” Pillifant said. “The earlier ones are called ‘vintage.’ The plastic may be a little more brittle. And like any collectable, they’re used — kids played with them. Those are the ones that seem to have the most value, because there’s less of them.”

Those thin-foot dispensers were notoriously fragile, so thicker feet followed, but other imperfections can also exist, like tiny cracks in stems or something known as “head flop.”

“Some are notorious for being floppy, they’re too heavy or they don’t set right,” said Baker. “If it’s supposed to be shiny, it needs to be shiny. Some can fade in the sun. And then there’s ones that have, like, an ear that’s become detached. There’s a Thor where his horns are very thin plastic, and they break off. After you’ve done this for a while, you kind of know what you’re looking for.”

While this unique hobby born almost a century ago from a failed smoking cessation aid certainly holds allure for those of a certain age, Baker and Pillifant say that Pez Heads aren’t going anywhere, any time soon.

“From my experience at the conventions and the gatherings we’ve gone to, it’s such a family-oriented hobby, and to see kids looking at Pez, we’re talking 5-year-olds, I feel very optimistic that the hobby’s going to continue on,” said Pillifant. “It’s still a very affordable hobby to get into, and lots of people buy the Christmas ones, and they become stocking stuffers, so they introduce their children to this.”

“There’s a point when a child becomes an adult, and they lose interest,” said Baker. “And then they have kids, and then they reach the age where they have additional disposable income, and the retro nostalgic part comes back. I’m hoping that’s what Pez does. A Pez collector doesn’t generally collect as an investment, they collect it for fun, and you walk down and look at all these smiling faces, and on your worst day you say, “’Ah, it’s not that bad.’”

But, Pez … er, Peg Harmon takes a much more simple, much more profound attitude toward the hobby that’s displaced her husband Bubba from the den while at the same time transforming it into her “Pez room.”

“It’s so inexpensive, and so colorful, and it brings me joy,” Harmon said. “It makes me happy.”