This must be the place: ‘I will walk alone, by the black muddy river’ 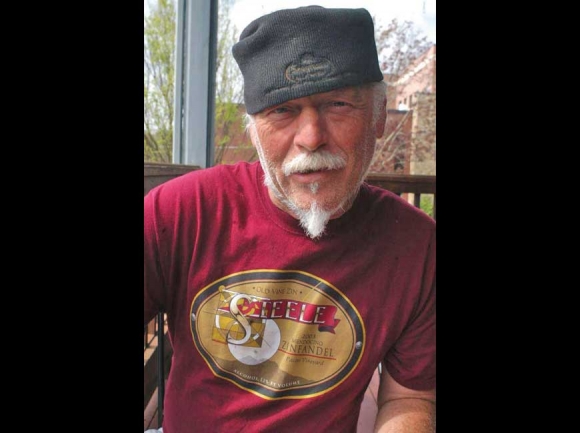 Many folks here in Waynesville knew Louie Bing as “the homeless guy with the dog.” Well, Louie and his Australian pit bull, Sid, were way more than that. They were family to me. And I was saddened to hear of Louie’s passing last weekend.

I snapped the portrait of Louie you see above when we first crossed paths in the spring of 2013. He was 65 at the time, and a big dude, kind of like this Popeye-type character. But, as strong as he was, he had a kind and troubled soul. You could see it and feel it, especially in his words. And I wrote an article on his life back then.

He spoke of growing up in a blue-collar Irish-German family in post-World War II Philadelphia, the second oldest of seven siblings in a row house. By the mid-1960s, Bing immersed himself into the rock-n-roll of The Rolling Stones and The Beatles, only to dive deep into the counterculture of the rapidly changing times.

“It was the dawn of the Age of Aquarius and I was a ‘freak,’” Bing said. “You could feel it, something was happening. It was the beginning of the revolution.”

The political and cultural revolution of the late 1960s was in full force and he was in the thick of things as a student at Temple University in Philadelphia. He found himself in the presence of the infamous Black Panthers movement, city police brutality and peaceful civil disobedience through sit-ins and be-ins. He was standing at the forefront of history, trying to make sense of it all.

“I wanted to see the movement for peace and equality come to something,” he said. “But, here I was seeing the Black Panthers with their guns and city police with riot gear. I wasn’t out there because I was a political animal, I just had no intention of getting killed in Vietnam.”

Then the 1970s rolled around, with Bing wandering out west to Colorado seeking his destiny, only to ricochet back east to Connecticut where he opened up a health food store.

“We were pioneers, learning along the way, and there I was a vegetarian, a cosmic cowboy,” Bing smiled.

By the 1980s, Bing had relocated to Western North Carolina, where he became a carpenter, picking up work when he could through the 1990s. But, a lifelong dark cloud of mental illness always hung overhead. Well aware of his constant battles with manic depression and bipolar disorder, Bing’s career advancements always seemed to take a backseat to his mental state.

From there, the house of cards began to fall. He bounced around between the homes of friends and strangers, ended up flat out on the street with empty pockets, a hungry belly and nobody to call for help.

“I was freaking out that first night out here. I had no survival skills, no backup plan, nobody except for street people who robbed me,” Bing said in 2013, misty eyed. “I had never been homeless, never been hungry and all of a sudden there I was on the street, and here I’ve been for the last seven years.”

Louie and I remained friends all the way until his passing. He would walk by my apartment in downtown Waynesville every-so-often, Sid (short for “Siddartha,” the birth name of Gautama Buddha — the founder of Buddhism) always a few yards back. We’d drink cold beers on my porch in the hot summer sun, Sid sprawled out on the ground, only to give him a small bag of whatever canned food I had in my cabinets before he moved on.

And sometimes we’d cross paths at the Waynesville Rec Park. He’d be strolling along in a large field with Sid, myself jogging by, but never too fast to not stop and catch up. He really meant something to me, a cosmic force I was “supposed to know,” you know?

I actually saw him the other day. He looked haggard, an old man now, with a large white beard, Sid moseying along right behind him. I hugged him, hello and goodbye. “Hey, son. How yah doin’?” he said with that trademark devil-may-care grin. Though he had been living in a tent way out in the woods for several years, he had recently moved into a small all-in-one, more like a shack with a heater. But, it was home, to him at least. We shook hands and I told him I loved him, to which he quietly mumbled, “I love you, too, son.”

I knew this day would someday come, just didn’t know it would be today. I love you, my brother, wherever you are. And what about Sid? Right after Louie passed, Sid was quickly taken in by a close friend of his, tail wagging in anticipation of some attention and belly scratches.

As well, when I first interviewed Louie, he read me some of his poetry. This is one of those poems:

“Striding towards the great finality / amidst the imitations of mortality / some few recognize the banality / of this thing we call reality / At homes, in our jobs, in our families too / all mean different things to me and you / friends and lovers now long lost / can help us direct the final cost / but when I’m in my grave / and my ashes are scattered / my soul will still know / that love is all that mattered.”

Rest easy, my brother. Your work in this lifetime is done.