Lambert not giving up on future run for chief 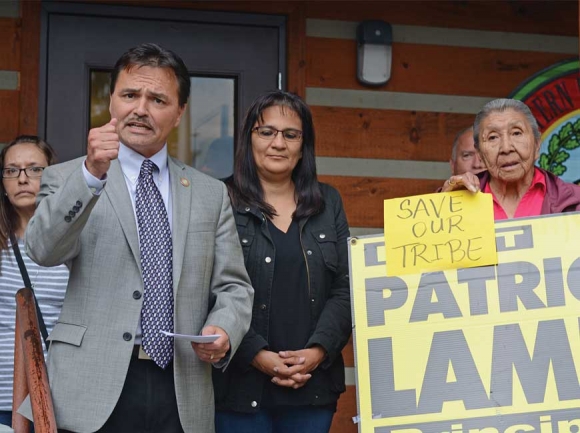 Patrick Lambert speaks to his supporters in front of the Cherokee Council House after Tribal Council voted to remove him from office in May 2017. Holly Kays photo

Patrick Lambert was removed from office following a controversial impeachment process in 2017, but with the 2019 election season underway he’s saying that the impeachment shouldn’t stop him from running again.

Cherokee’s election ordinance contains a law stating that anybody who has been impeached by Tribal Council is barred from candidacy, which would seem to mean that Lambert could never run again unless the impeachment verdict should be somehow overturned. However, Lambert pointed out that the tribe’s Charter and Governing Document, which occupies a similar place in tribal law as the U.S. Constitution does in federal law, also lays out qualifications and disqualifications for office, and in that list impeachment is not mentioned.

In Lambert’s view, the charter, like the U.S. Constitution, lays out a basic set of rights for citizens and a framework for government. Because the stipulations in the charter don’t take away his right to run, an ordinance shouldn’t be able to do so, he said — the charter is the highest law of the land, and an ordinance can’t override it.

“Think of the constitution as being the floor. States can pass laws that give people more rights, but they can’t go below that floor and give people less rights,” said Lambert, who is a member of the N.C. Bar. “The constitution guarantees people certain inalienable rights, and those rights must be adhered to. The states can add more rights to you, but they can’t take rights away from you. I think of the charter as being in the same light, as being our ‘constitution,’ our governing document.”

In fact, the tribe has a whole section of code dealing with elections, more than 11,000 words in all covering everything from voter registration to election board procedures. Tribal Council is in the midst of an overhaul of that code that will likely yield even more volume.

The question, then, is not whether Tribal Council can make laws about elections but whether the law in question overrides what is already spelled out in the charter.

At fewer than 2,000 words — just 25 percent longer than this story — the charter is a relatively short document considering that it’s attempting to outline an entire government, so there is much that it leaves unaddressed; hence the clause giving Tribal Council the power to make additional laws and regulations.

However, one area in which the charter is very clear is what makes a person eligible or ineligible to run for office. Section 9 of the charter states that candidates for chief and vice chief must be at least 35 years old by Election Day and have resided on Cherokee lands for at least two years immediately before Election Day. Section 17 goes on to say that anybody who has defrauded the tribe, helped anyone else defraud the tribe or been convicted of a felony will be ineligible to run. Taken together, those sections comprise 10 percent of the charter’s word count.

“Can an ordinance override the charter? And everything I’ve ever known about law and our tribe, the answer is no,” said Lambert. “If it spells out the qualifications as well as the disqualifications, then I should be allowed to run.”

Lambert’s detractors would likely point out that he should also be ineligible from the standpoint that anybody who has defrauded the tribe is disqualified. The impeachment articles contended that Lambert illegally entered his hotel into a profitable contract with the tribe and unlawfully racked up legal expenses, billed to the tribe, before his inauguration. However, Lambert pointed out, while the majority of Tribal Council voted to convict him he was never charged with any crime, much less convicted.

“If they knew that I had violated law and the prosecutors or anyone else — whether that’s tribal or federal — thought there was a valid case there and they could prosecute me for doing something illegal or wrong, they certainly would have,” he said. “I wouldn’t be sitting here a free man.”

If Lambert wants his name on the ballot, however, one of three things will have to happen. Tribal Council could agree with him that the ordinance’s additional restrictions are invalid and pass legislation to repeal them — conveniently, the body is expected to vote on a revised election ordinance at its next meeting on Thursday, Dec. 6. If that doesn’t work, Lambert could start a petition to put a referendum question on the ballot asking voters whether they’re in favor of repealing the law. Alternatively, Lambert could file a lawsuit asking the courts to strike down the law.

According to Lambert, none of this talk is because he has a “burning personal desire” to serve as chief again. Rather, he said, it’s because tribal members ask him on a daily basis whether he’s running again.

“If I’m not wanted and people don’t want me I accept that, but to have a handful of political people decide that is what I find so wrong and what I have difficulty getting beyond,” he said.

Lambert, who was elected principal chief in 2015 with 71 percent of the vote, was removed from office in May 2017 after nine of the 12 council members sitting at the time found him guilty on eight of 12 charges. The articles of impeachment were adopted on the same day that FBI agents raided the Qualla Housing Authority, part of an investigation that resulted when Lambert sent that agency the results of an incriminating audit he’d had done on Qualla Housing.

Six of the 12 councilmembers sat on the Qualla Housing Authority board; Lambert consistently maintained that he was innocent of any wrongdoing and that the impeachment was merely retribution for his efforts to expose corruption in tribal government. Of the 1,140 people who voted at a Grand Council Lambert called in April 2017, 84 percent wanted to stop the impeachment.

While Lambert has been out of office for nearly as long as he was in it, the legal fallout of the impeachment is still ongoing. On March 29, the Cherokee Supreme Court held a dual hearing on matters related to the impeachment. One hearing dealt with whether Rob Saunooke, the attorney who had represented Tribal Council in the impeachment, should be allowed to practice law in Cherokee — he is licensed in Florida but not in North Carolina, as Cherokee law requires.

The second hearing dealt with a motion to dismiss Lambert’s lawsuit claiming that the impeachment process had violated his due process rights.

While the court did release a ruling May 1 banning Saunooke from practicing law in Cherokee, it has yet to rule on the second part of that March 29 dual hearing determining whether Lambert’s suit can move forward. The lawsuit holds the potential for the impeachment to be found to be invalid, which would free up Lambert to run again even under the existing ordinance.

The clock is ticking to amend the election ordinance, because it can’t be changed during an election year. Any changes would have to be approved by the end of the year.

Tribal Council is currently in the midst of revamping its election ordinance, and the current draft is scheduled for a vote Dec. 6. A look at the document shows that Tribal Council is not operating with the same assumptions as Lambert when it comes to how the ordinance and the charter should relate to each other.

Rather than taking away disqualifications for office so that the code mirrors the charter, the proposed ordinance adds two disqualifications. According to the draft document, being more than 90 days in default of a debt to the tribe or failing to meet residency requirements would disqualify somebody from running.

Attorney General Mike McConnell and Principal Chief Richard Sneed both declined to comment for this story. Sneed has already announced his candidacy for the chief’s office in 2019, as have Teresa McCoy and Missy Crowe.