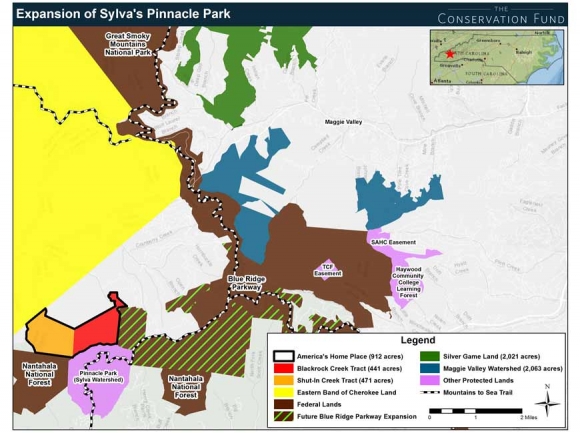 A plan to conserve more than 900 acres of high-elevation terrain in Jackson County will move forward after the Clean Water Management Trust Fund Board voted last week to award $1.5 million toward its protection.

The Conservation Fund, a national nonprofit with state offices in Raleigh, has been working for years to get the land, currently owned by developer America’s Home Place, into public ownership, but the initial $4.25 million price tag was too much for Sylva and Jackson County — which The Conservation Fund initially approached with the ask — to fund.

A new funding plan, announced earlier this year, split the land into two separate purchases, with Sylva and Jackson County each pledging $250,000 for the Blackrock Tract, to be combined with $1 million from the Clean Water Management Trust Fund and $700,000 in private donations. That land would eventually be conveyed to the town of Sylva as an addition to Pinnacle Park. Mainspring Conservation Trust would take the lead on the Shut-In tract, hoping for $500,000 in Clean Water money to combine with $400,000 in private donations and $1 million from a local conservation partner.

However, the plan hit a roadblock due to a legal scuffle between the N.C. General Assembly and Gov. Roy Cooper. Cooper alleged that the way appointments were made to certain boards, including Clean Water, gave the legislature an unconstitutional level of power over the government’s day-to-day operations. In an Aug. 31 ruling, a three-judge panel on the N.C. Superior Court agreed with Cooper, meaning that the board’s structure had to be rectified before the Clean Water board could vote.

Below the Pinnacle: Project seeks to protect 250 acres below Pinnacle Rock

The 3.5-mile hike to the top of Pinnacle Rock is a heart-pumping one, the old logging…

That meant a delay for the conservation project, because the board was originally supposed to vote on this year’s grant awards Sept. 14. That meeting never happened.

In October, instead of replacing any current board members with his own appointees, Cooper converted some of the board members appointed as legislative appointments to gubernatorial appointments. The goal was to allow the board to meet as quickly as possible to make its grant decisions, said Bill Holman, N.C. Director for The Conservation Fund. The board ultimately met in Raleigh Nov. 14-15 and voted to fully fund the requests from The Conservation Fund and Mainspring.

“The Conservation Fund greatly appreciates the grant from CWMTF to help acquire the Blackrock property and expand Sylva’s Pinnacle Park,” said Holman. “The project will protect water quality, wildlife and the spectacular crest of the Plott Balsam Mountains. The Fund also thanks the N.C. General Assembly for appropriating funds to CWMTF so that communities across the state can protect water resources and increase public access.”

Earlier this fall, Holman had expressed concern that the delay in grant decisions could place the project in jeopardy, as the January closing date for the Blackrock Tract had been chosen based on when money from any Clean Water grants awarded would come through. However, Holman is hopeful that the project will be able to stay on schedule.

The Plott Balsam awards were not the only grants landed by Mainspring or The Conservation Fund. Mainspring also received $604,831 to protect 504 acres in Graham County, 80 percent of which is in the viewshed of the Appalachian Trail, as well as $156,141 for an extension of the Little Tennessee River Greenway at Cartoogechaye Creek in Macon County.

The Conservation Fund’s other awards were for counties further east — $840,000 for a project on the Deep River in Chatham County and $425,000 for the Lindsey Bridge Dam Removal in Rockingham County.