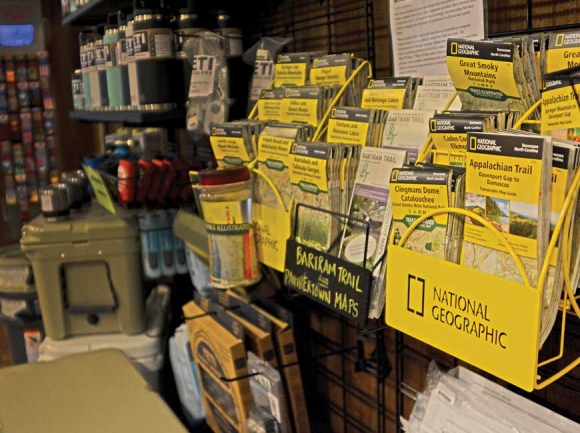 Outdoor 76 stays well stocked with maps, clothing and a variety of other gear for outdoor adventures. Holly Kays photo

When Rob Gasbarro and Cory McCall met in 2008, their friendship formed around hiking and biking the mountains surrounding Franklin, their weekdays filled by burgeoning careers in civil structural engineering and real estate, respectively.

Then came the recession. Things got bad and then worse. By 2010, the careers that they’d planned to retire in, provide for families with, seemed headed for an early end.

“Long story short, one day he and I just met for lunch and we were like, ‘Let’s just open an outdoor store,’” Gasbarro recalled. “‘What’s the worst that can happen? We starve and it doesn’t work and we’re unemployed? We’re already facing that anyway.’”

Now an anchor store on East Main Street in Franklin, Outdoor 76 was born — or at least conceived — as a rough business plan scribbled on the back of a lunch napkin at Sunset Restaurant.

Taking the leap wasn’t easy. Neither man had much outdoor industry experience to speak of, and neither had ever started or run a business. And a shop like the one they envisioned, selling $100 raincoats and jackets? In 2010, who had that kind of disposable income, especially in Macon County, where the unemployment rate was 9.8 percent when Outdoor 76 opened in October? Nationwide, outdoor stores like the one they’d envisioned were struggling, unable to compete with lowball internet prices — how could Gasbarro and McCall do any better?

“We had a lot of naysayers, people that heard what we were doing and thought we were nuts,” said Gasbarro.

Gasbarro and McCall also entertained the possibility that they might be a little nuts. But things just seemed to line up. One of McCall’s real estate clients called him about a property at 76 East Main Street, asking whether he knew anyone who might be interested. That storefront became the first location and namesake of Outdoor 76, and the two men went to work fixing it up. Lo and behold, other businesses soon followed suit. Downtown Franklin began to creep back to life.

McCall and Gasbarro, ages 36 and 42, both live in Franklin, though they considered setting up shop elsewhere. But the more they investigated, the better Franklin looked. It’s within two hours of a list of cities with a combined population of 14 million people. It’s an Appalachian Trail town, and located in a county with a bounty of outdoor opportunities, including 18 peaks over 5,000 feet. So is Outdoor 76. In the past six months, the company has opened two new stores, in Cherokee and in Clayton, Georgia.

“It’s definitely been a very challenging year, in a good way,” said McCall. “It’s forced us outside of our comfort zones, which from a business aspect is very important.”

McCall and Gasbarro had always set out to expand their business. The goal is to create something alive and growing that can provide for their families until they’re ready to retire, and that can be one day passed on to their children. To do that, they figured, they’d need more than one store.

The first big expansion happened in 2013, when they moved from their initial space to their current location, the 10,000-square-foot old Peebles building at 35 East Main Street. They leased out a couple chunks of the space to other businesses, put in a taproom and set up their retail operation in the remaining 3,000 square feet.

Within a year of moving, they’d starting discussing where their second store should be, by 2016 settling on Clayton and starting to look for properties. The right location came up for sale in 2017, and they closed around Christmas, planning to let the current tenant stay through the end of Outdoor 76’s busy Appalachian Trail season. The Clayton store would open in late summer 2018.

Or, at least that was the plan.

In February, the phone rang with Motion Makers Bicycles owner Kent Cranford on the other end. Cranford was planning to open a Motion Makers outpost in Cherokee, and he wanted Outdoor 76 to share the building.

“After collecting all the details on it, Cory and I realized if we don’t do this now, we’ll probably never have this opportunity again,” said Gasbarro. “And after weighing out all the pros and cons and what would go into it and what we could get out of it, we kind of said, ‘We’d be dumb not to do this.’”

So, instead of plowing through A.T. season before methodically building out the Clayton store, Gasbarro and McCall went into a turbo mode that would last for months. While A.T. hikers were walking through Franklin, they were in Cherokee, working to get the building ready for a Memorial Day opening — for a while there, they were up until 2 a.m. nearly every day, working.

By mid-September, they’d opened the Clayton store, too. The chaos has subsided and they’re focused on catching a good breath as they learn how to manage their new reality.

“If you would have told Cory or I 10 years ago that we would own an outdoors store in three strong outdoor communities in this region, I would have said you’re out of your mind,” said Gasbarro.

Now the partners are learning how to oversee a whole new level of organization and management and delegation. Some things are easier now, such as being able to move inventory around between multiple stores. But other things are harder — there’s more time on the road, and hiring enough staff to meet customer service and technical expertise qualifications is a constant challenge.

“That’s really part of what makes our business different,” said McCall. “If you come in and ask us a question we want to be able to answer it. And not answer it because it’s information we’re getting out of a book or reading off a website. It’s because it’s first-hand experience of when I used this product, this is what I experienced.”

Employees have to do more than just take money at a cash register. They have to engage with customers, start conversations and, above all, get out to use that gear they’re trying to sell. 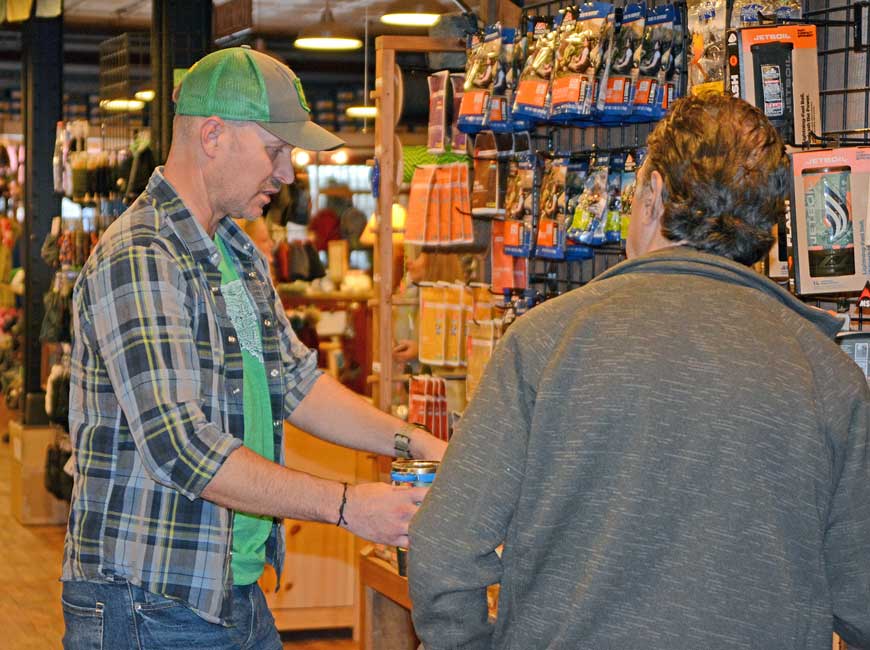 By pretty much any standard, Outdoor 76 is a successful small business. But McCall and Gasbarro are the first to admit that it really shouldn’t have happened like that.

From mid-recession timing to the partners’ limited experience with entrepreneurship to Main Street Franklin’s distinct lack of bustle in 2010, they had a lot working against them. But Gasbarro and McCall are both serious about their Christian faith, and they’ve come to believe that Outdoor 76 was just something that they were supposed to do.

“We didn’t go asking for this. This wasn’t a childhood dream that we chased,” said Gasbarro. “This was one day we both felt it on our hearts, almost like God saying, ‘I’m putting you two together. You two became friends because I want you to go into business together.’”

That doesn’t mean it’s been a bumpless road. There have been lots of nights of lost sleep, lots of seasons of doubt on the edge of a risk. But knowing they’re walking a path they’ve been called to has brought peace to those storms — and it’s brought perspective to success.

That community focus is a cornerstone for Outdoor 76. It makes sense economically, because, as Gasbarro said, “People vote with their money. (We wanted) people to vote for us.” But their commitment to community transcends a simple cost-benefit calculation. Even in the midst of expansion, Gasbarro and McCall made it a point to host their spring barbeque and fall 50K race — even though the race came just days after the soft opening in Clayton.

“We had to really stretch ourselves to continue to stay focused this year on the involvement aspect while we were going through the expansion, which was really difficult because ultimately there’s only so many hours in a day,” said McCall.

There have been other, more traditional ingredients to the store’s success, too. The gamble McCall and Gasbarro made on the resurgence of Franklin’s Main Street came out in their favor, and frugality early on kept plenty of money in the business’s account to cover the growing expenses that came with growing revenues.

A large portion of Outdoor 76’s revenue comes from customers in the 45 to 55 age range, active people with more disposable income than their younger counterparts. But A.T. hikers — with their vast array of ages and backgrounds — are also a key part of the business’s success. From January to May, the store is all about serving and supplying the thru-hikers. As a result, word has spread through the A.T. community that Outdoor 76 is a place to stop.

“We knew that the A.T. hikers would be a portion of our business,” said McCall. “We had no idea stepping into it how significant the A.T. market would be.”

But really, that’s just one more surprise to add to the list.

“We never imagined us being where we are now,” said Gasbarro.