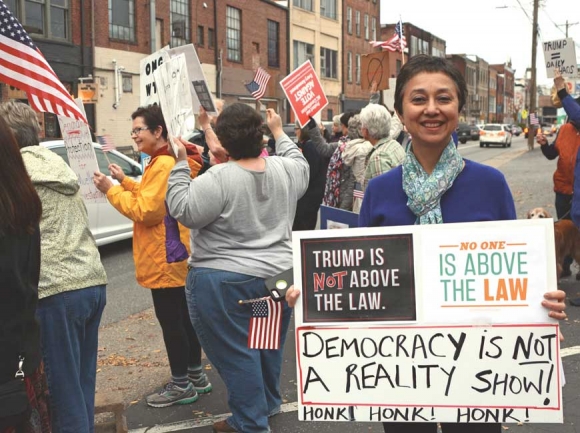 It didn’t take long for protests to spring up across the country, state and region as soon as President Trump fired Attorney General Jeff Sessions.

One day after Sessions’ Nov. 7 sacking, about 50 protesters gathered in front of the Jackson County Democratic Party headquarters on Mill Street in Sylva, chanting as cars drove by and honked.

That was the refrain from demonstrators concerned that Trump’s move foreshadows his meddling in the ongoing Russia investigations, from which Sessions — to Trump’s great dismay — recused himself in early 2017.

“We hope to bring attention to the fact that Mueller’s investigation needs to be unimpeded and we need to know the facts that come out without the Trump administration constantly putting it down and saying it’s fake news and basically saying it’s a big witch hunt,” said Nilofer Couture, of Cullowhee, who helped organize the Sylva event. “It’s not a witch hunt.”

The vibe was similar in Haywood County, where about 70 people waved signs and chanted in front of the Historic Haywood Courthouse in Waynesville. 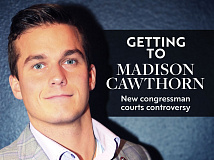 Armed forces veteran Rob Burress joined the Waynesville protestors to express his dissatisfaction with what he thinks is an unfair precedent being set by Trump.

“I think the president thinks he’s above the law and he needs to go through the same process everybody else has to go through. If I were being investigated for something that I was being charged with, I wouldn’t be able to call an end to the investigation and neither can he,” said Burress. “I’m a veteran and this is not what I served for, this kind of justice system.”

The event, called the “Mueller protection rapid response,” had been set up months in advance by liberal advocacy group MoveOn.org in anticipation of post-Nov. 6 election troubles, but was triggered when Trump fired Sessions; a call for action went out, and protestors showed up in all 50 states, the U.S. Virgin Islands, Puerto Rico and even the Northern Marianas islands.

Jackson County Republican Party Chairman Ralph Slaughter, however, sees the protests as a case of much ado about nothing — stunts to generate anger about something that’s not actually happening.

“I don’t know why they’re protesting,” said Slaughter. “There’s nothing going to change from what it is today. It’s going to stay the same. Eventually Mueller will come out with what he has found out and what appears to be true or not true, and I think that’s all I can say about it … I don’t think Trump’s going to do anything. Mueller finishes it, he will turn it over and that will be the end of it. I don’t think it will be stopped at all.”

Holly Kays contributed to this report.