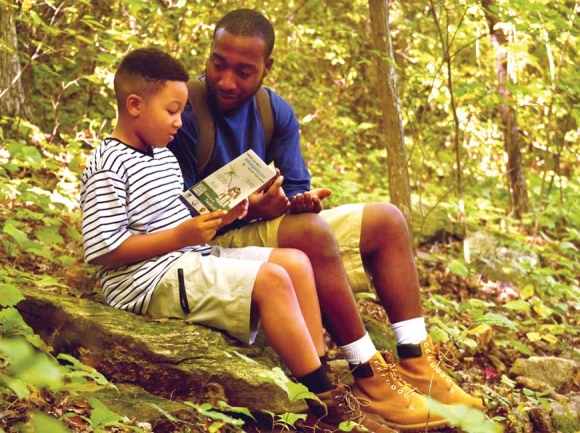 In 2008, the Blue Ridge Parkway Foundation launched a new program aiming to get kids and families out exploring the high-elevation corridor. Ever since, the Kids in Parks program has mushroomed into a national endeavor with designated trails from San Diego, California, to Nags Head, North Carolina.

Kids in Parks was recognized for its decade of accomplishments when it won the Youth Engagement Award at the SHIFT Festival in Jackson Hole, Wyoming. The annual SHIFT Awards recognize individuals, initiatives and organizations that contribute to conservation through human-powered outdoor recreation.

“I don’t know that we envisioned that we would be in San Diego or in South Dakota, but we definitely set out to design it so it was going to be the next big thing in children’s nature programming, at least in the Blue Ridge,” said Kids in Parks Director Jason Urroz, who has been on board since the program’s inception. “It just so happens that nature deficit disorder, childhood obesity and people not spending time outdoors isn’t a Blue Ridge problem. It’s happening everywhere.”

The original idea behind Kids in Parks was to make outdoor exploration more accessible, simple and interactive for families by clearly identifying kid-friendly trails and having some sort of interpretation available to help kids learn about the plants, animals and other natural features they were seeing.

The program was developed as a self-guided experience offering brochures to help kids interact with and learn about the trails, dubbed TRACK Trails. Most TRACK Trails are 1- or 2-mile hikes with some sort of interesting feature along the way.

“The idea is it’s not an overly-strenuous-death-march-to-a-mountain-and-when-I-get-off-this-trail-I-never-want-to-go-hiking-again kind of trail,” said Urroz. “It’s fun and easy and something to do along the way.”

Kids can sign up online before the hike and log their adventures once completed. In return, they earn prizes — each TRACK Trail has its own unique sticker to be placed in the nature journal earned for the first trail tracked. Subsequent trails can earn a patch, bag, bandana, magnifying class and walking stick medallion.

Early on, Urroz said, the prizes are the “driving factor,” spurring kids to ask their parents to take them out again and again. But later on, the experience itself seems to be reward enough.

Of the kids who visit any individual TRACK Trail, 51 percent went to that location specifically because they knew the trail was there, Urroz said, and 47 percent of kids who complete one trail do a second one. Of those returnees, 88 percent go on to repeat the experience multiple times.

“It really does show the power of the network, and when a community can have more than one trail in that network, it provides kids and families with multiple opportunities to get outdoors,” said Urroz. 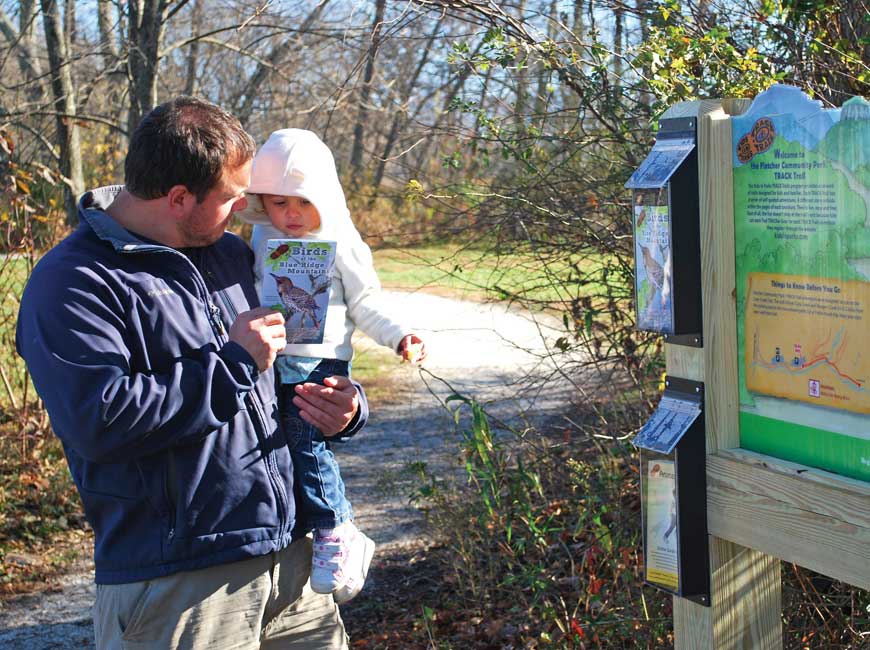 A father and his daughter learn about birds of the Blue Ridge in Fletcher. Donated photo

That network is now far larger than Urroz ever envisioned. The Blue Ridge Parkway Foundation exists to support the Blue Ridge Parkway, and the original plan for Kids in Parks was to designate kid-friendly trails up and down the Parkway’s 469-mile length. But when the Foundation dedicated its first trail in 2009, it got a lot of interest from other organizations wanting to use the brochures on birds and trees and flowers on their own trails. That got Urroz thinking about the pros of expanding the program beyond the Parkway.

“Going to the Blue Ridge Parkway, which is a national park, might be a scary thing because that’s where the bears are at,” he said. “It’s a national park. It’s wild. Maybe by doing a state park or a national forest that’s closer to their home they could find TRACK Trail brochures at those locations, do them, look on our website and say, ‘Well, there’s one on the Parkway. Let’s do one on the national trail now.’”

So, the Foundation started doing trails in communities along the Parkway, and the program exploded. Currently, there are 175 TRACK Trails in 10 states and the District of Columbia. The Kids in Parks program recently logged its one-millionth hiker, and 475,000 kids have hiked a TRACK Trail in the last nine years. Last week, North Carolina’s 100th TRACK Trail — located in the eastern part of the state — opened. The Blue Cross Blue Shield of North Carolina Foundation has put in about $2.5 million over the past decade to support the program within state boundaries, with trails outside North Carolina funded through other sources.

That doesn’t mean the work is done. If there are 10 states with TRACK Trails, there are 40 states without. And even in North Carolina the trails could be more prevalent, especially in the far western counties. West of Asheville, there are only four TRACK Trails — at Fontana Dam, Cherokee, Gorges State Park and Andy Cove near Brevard.  Four WNC counties don’t have any TRACK Trails at all — Clay, Cherokee,  Jackson and Macon — but Urroz is trying to correct that. The Blue Ridge Parkway Foundation is working with the Nantahala National Forest to put trails in Cherokee and Clay counties, with Macon and Jackson next on the to-do list. 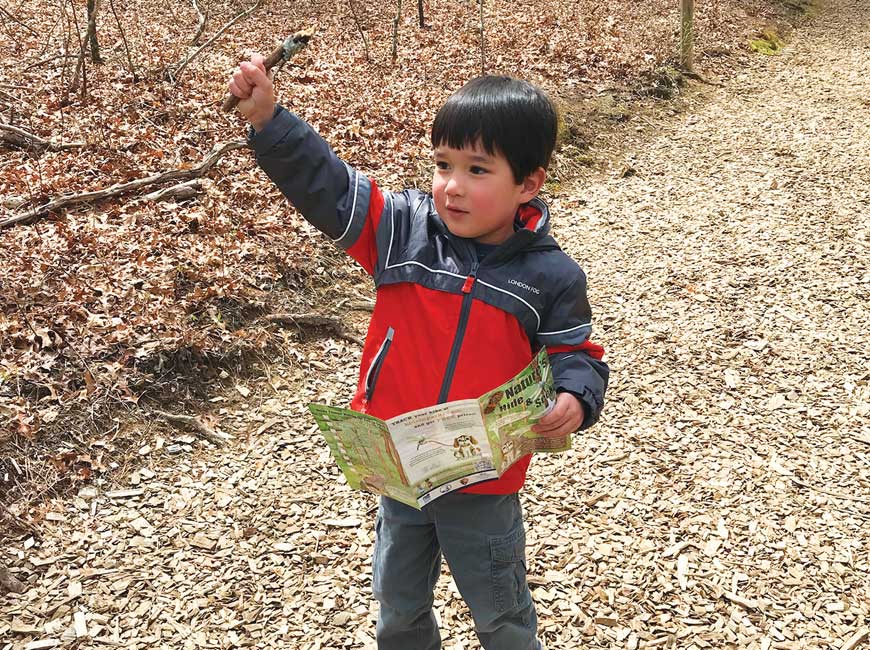 A young TRACKer holds up a lichen he found. Donated photo

The Kids in Parks program reaches spheres beyond recreation. The TRACK Rx program, launched in 2015, partners with physicians to prescribe time outdoors as a form of preventative medicine.

It was a development that went along with a growing trend of doctors prescribing time outdoors to their patients, and with most Kids in Parks funding coming from the BCBS of N.C. Foundation, it made sense to develop a health care emphasis within the program. Urroz felt too that Kids in Parks could help address some issues physicians had been experiencing with nature prescriptions.

“Doctors would feel uncomfortable writing prescriptions for kids to go anywhere in nature because the doctor doesn’t know where they’re going to go,” Urroz explained. “Maybe the parent takes them to the cliff trail and the kid falls off the cliff. With TRACK Trails we know that those locations are kid- and family-friendly because we’ve already vetted the trail location.”

The TRACK Rx program provides participating physicians with prescription pads to write down type and dosing amounts for outside time, and the back has information about how to get started with the Kids in Parks program.

“A lot of our therapists feel passionate about getting kids outside,” said Laura Collie, front office administrator and new patient experience associate at Asheville-based Carolina Pediatric Therapy, which also has a Waynesville office. “It’s such an underused tool to help kids with all situations. Nature is just so good for our health and it’s good to get away from screens and go explore and be creative and use our imaginations.”

Carolina Pediatric Therapy has only been part of TRACK Rx for a couple months, joining after Collie saw the program in use at one of the practices that refers patients to Carolina. Therapists are still getting used to using the tool, but so far about one-third of kids end up with a prescription, Collie said.

“If the kids are working on their ‘s’ sounds, it will be, find five items in the park that start with an ‘s’ — look for sidewalk, snake, stream, things like that,” said Collie. “They would practice their words based off of whatever they find in nature. Or kids in physical therapy will walk and do a stretch every couple of minutes.”

It seems to be working well, she said — the kids get really excited about receiving a paper prescription to hold onto, and the families appreciate some clear direction on nearby places they can go to get outside with their child.

Carolina Pediatric Therapy isn’t the only practice new to Track Rx — at the beginning of 2018 only about 80 doctors were participating in the program, but currently there are about 500, said Urroz. The uptick is largely due to BCBC of N.C.’s corporate side seeing what was happening through the foundation and promoting the program to doctors.

That means more kids getting outside, and for both kids and for nature, that’s a good thing.

“We need the next generation of stewards to get connected to nature so they can understand the importance of these lands, because when these kids are adults and somebody says, ‘We don’t need the Parkway anymore, we don’t need the Smokies anymore, we can put apartments on the ridges’ — who is going to raise their hand and say, ‘No. Those are places I like to go for physical health, mental health, or that’s really great for biodiversity?’”

Get started with Kids in Parks

Find out more about Kids in Parks and TRACK Trails at www.kidsinparks.com. The site includes easy information about how to sign up as well as an interactive map showing all 175 trails in the network.