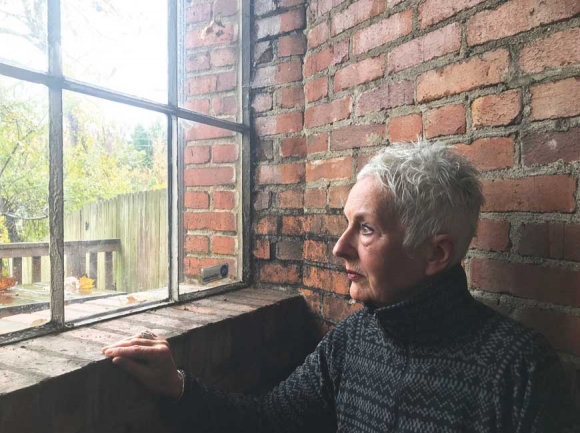 A press release issued by Haywood Regional Medical Center on Oct. 26 touted renovations to an existing facility that will provide better building utilization and expansion of patient care services, but that’s not the part of the statement that’s got some local residents upset.

“This renovation and expansion of services at The Homestead is exciting for Haywood Regional and everyone we serve,” said Rod Harkleroad, CEO of HRMC, in the release. “With the changes planned, we will be fulfilling this promise in new ways.”

The stand-alone building HRMC is renovating — called The Homestead — currently serves as the only hospice inpatient center west of Asheville; by the end of this year, its remaining occupants will be moved to the hospital to make room for infusion services, a sleep center and a wound care center.

No jobs will be lost as a result of the transition, and some may even be created in the process.

But the promise of high-quality palliative hospice services — for those likely to die soon — will likely go unfulfilled, according to retired nurse Jenny Williams.

“The hospice itself came to be back in the early 1980s, when the hospice movement was first getting down into this area,” said Williams, who started working there in 1997. “It started off as an all-volunteer agency.”

Williams said that despite what some might think, working in hospice care was a beautiful experience.

After starting off in a small stone building in Clyde, what would become The Homestead merged in 1990 with the hospital to take advantage of the availability of the hospital’s Medicare certification. Private donations funded the building’s construction on land donated by the hospital.

“I had a man — we took care of his wife — this man brought me a paper bag full of pennies,” Williams said. “Many of those donations, $20 here, $100 there, there were a lot of people in this county who gave what they could to make sure this was set up so that their loved ones could receive hospice care.”

The six-bed building opened and was given to HRMC in 2012, and in 2017 LHC Group, a Louisiana-based in-home healthcare services firm, was contracted to run it. The Oct. 26 release announced they were pulling out.

Harkleroad said that both the hospital and LHC jointly felt that moving hospice services to the hospital was the best option, and that it was indeed a joint decision.

A statement from LHC said that since 2017, LHC Group and Haywood Regional Medical Center have “worked together as healthcare partners to provide high quality post-acute services to our community” and that the transition “is an enhancement to the level of service we provide to the community as part of our collaboration.”

“Using the building is a better step from the care model standpoint, where the building now only has a nurse and a tech that supports the patients around the clock,” said Harkleroad. “What it will do is, it gives an opportunity where we can have ancillary services on-site, from respiratory therapy to lab to a 24/7 doctor, plus more RN coverage.”

“I cannot understand how it got to this point,” Williams said. “That’s a perversion. That’s wordsmithing. It was given to hospice to serve hospice patients. We raised $3.2 million, and this money came from private donations. It was decided to gift that money to hospice, not to a sleep center, not for wound care, but to hospice.”

As far as seeing any remuneration for those funds raised in the community, Harkleroad says it’s already happened.

“There were key people in the community and some staff here that donated money on it, but that was prior to me, and prior to 2012, so I don’t have much knowledge of that,” he said. “LifePoint came in in 2014 and they purchased the assets, and part of the assets was the Homestead, and they paid fair market value. What happened is, all the money has been released to the Haywood Healthcare Foundation, so the good thing is that all the money that was raised is sitting in the Foundation and can be used to support health care needs in the community.”

Hospice services will continue to be provided in HRMC’s main facility in Clyde, but Williams expressed concern that the setting wouldn’t be as calming as that of the Homestead — the hustle-bustle of a busy growing hospital is an environment far removed from the quiet standalone building on Sunset Ridge Road.

“How is that possible? It’s not. That was the whole point. We had a hospice room in the hospital before we got the Homestead, and we tried to make it nicer and more comfortable so if a caregiver wanted to stay overnight it was comfortable,” she said. “But still, it’s a hospital, it’s noisy, we had to get a certain protocol so they wouldn’t come in to get vital signs, and if a patient was actively dying they wouldn’t be turned every two hours. A hospital setting is not a place for dying patients. That totally undoes 44 years of hospice philosophy.”

Harkleroad admitted that it might not be as easy or quick to access as the standalone building, but that the concept of hospital-based hospice services is the right call.

“We did this model prior to 2012, and also our sister hospital Harris [Regional Hospital, in Sylva] has the exact same model now, so the convenience of being able to pull up in front of a building and walk right in, will be [reduced] where you have to get on an elevator and go on up but we’re going to leave it in one section at the end of the hall can create a nice area for the patients to have some privacy,” he said.

At least one other person disagrees with Harkleroad.

“My husband had Parkinson’s and in the last part of the phases of Parkinson’s, he needed to go to the hospital. While we were there, the idea of hospice was brought to bear,” said Waynesville resident Lorna Sterling, of her late husband Peter. “The thing that people do not want to do is die in a strange, uncomfortable environment and that’s what a hospital is.”

Renovations to the Homestead are set to begin in early 2019.