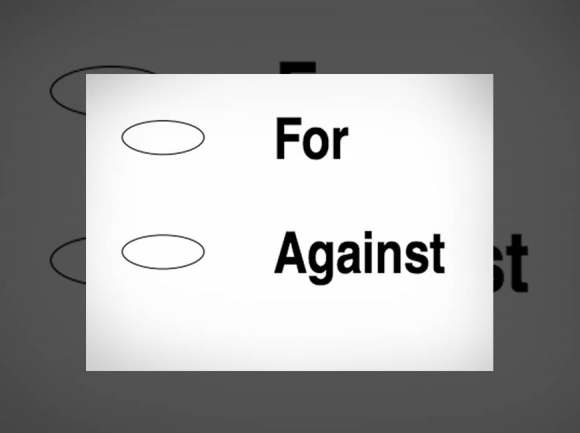 Voters will be asked to decide on six proposed amendments to the N.C. Constitution this year. NCSBE photo

Most years, voters head to the polls with a few candidates or a political party in mind, push some buttons, and go home. But this year’s ballot also contains six proposed amendments to the North Carolina Constitution.

“It’s pretty common,” said Dr. Chris Cooper, political science department head at Western Carolina University. “Less common in recent years, but we amend it on average about once a year. That’s to me the most interesting thing about state constitutions. We amend them a lot. Alabama’s amended theirs, I think it’s 900 times.”

But once an amendment is ratified at the polls, it acquires much more force, and becomes much more difficult to change.

That has given pause to many voters; the six amendments proposed this year have no enabling legislation attached to them, leaving the proposals short on specifics.

“The voter ID one in particular, I think the lack of specificity is more apparent there than it is in the others — which ID is counted, which ID is not counted, what happens if you don’t have an ID the day you show up,” he said. “Those kinds of questions are pretty key.”

Five of the six also have no information on the cost of the amendments, meaning voters will simply have to trust the General Assembly to do what they think is best if they’re passed.

Protecting the right of the people to hunt, fish and harvest wildlife

Acknowledges the right to hunt, fish and harvest wildlife, and to use traditional methods, without defining those methods. If passed, no changes to trespassing, property rights or eminent domain laws would occur, nor would it likely alter substantially the state’s existing licensing programs.

Currently, the North Carolina Constitution guarantees victims of certain crimes certain rights. If this amendment is adopted, the Constitution would also guarantee victims the right: to be treated with dignity and respect; to reasonable, accurate, and timely notices of proceedings; to be present at any proceeding, upon request; to be reasonably heard at additional kinds of court hearings; to restitution in a reasonably timely manner; to information about the crime; and to reasonably confer with the prosecutor.

Require voters to provide photo identification before voting in person

Removes from the governor most of the power to make appointments to judicial vacancies, shifting that responsibility largely to the General Assembly, and also enables the General Assembly to create two additional Supreme Court seats and fill them with unelected justices until such time as the seats are offered up for election – up to four years.

• AGAINST: All five living former governors of the State of North Carolina, all six living former Chief Justices of the N.C. Supreme Court.

• AGAINST: All five living former governors of the State of North Carolina, all six living former Chief Justices of the N.C. Supreme Court.