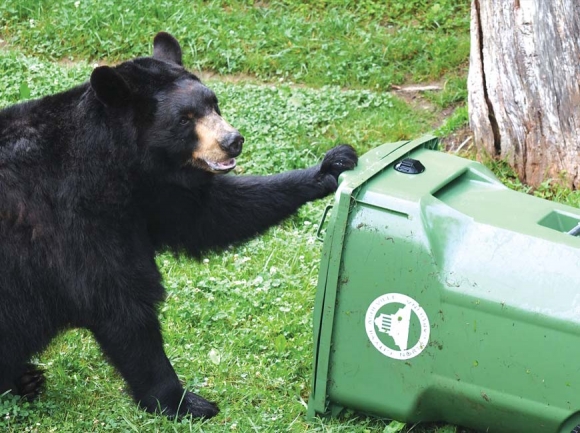 A nighttime breath of fresh air turned traumatic for 75-year-old Swannanoa resident Toni Rhegness when she spotted three bear cubs while walking her dog on leash in her front yard Sept. 18.

While Rhegness followed important bear safety rules at her own home — not leaving trash outside and keeping her dog leashed, for starters — her neighbor had left garbage cans outside for pickup the next morning, and the cubs were scavenging them for a meal. Seeing the cubs, the dog barked. Rhegness shouted to scare the bears off and picked up her dog to go inside.

But an adult female bear, which Rhegness hadn’t seen, was in the vicinity as well. The bear attacked Rhegness, biting and scratching her repeatedly. Rhegness wound up with serious but non-life-threatening injuries — she went to the hospital but was later released.

“A lot of people in the mountains have a high tolerance for bears living with them, and that’s fantastic. However, sometimes they’re too tolerant,” said Colleen Olfenbuttel, black bear and furbearer biologist for the N.C. Wildlife Resources Commission. “The bear’s getting into their garbage, the bear’s getting into their bird feeders. They don’t realize they’re putting human safety at risk and they’re putting bear safety at risk when they do that. That’s what we saw with this incident in Swannanoa.”

The neighbor knew bears sometimes got into the trash but still kept putting it out the night before pickup, Olfenbuttel said. That pattern resulted in Rhegness going to the hospital and the bear being euthanized.

It’s never a good idea to leave trash outside if you live in bear country. But this year especially, it’s important for mountain residents to be bear-wise, Olfenbuttel said.

“What we’re seeing this year is the acorns are fair to poor, and especially poor in the upper elevations,” she said. “Where we are seeing that there is some acorn production is in the lower elevations, where you have your communities, your towns, where people are living.”

Every year, the Wildlife Commission does a survey of hard mast production — natural nuts like acorns, hickory and walnut, with acorns being the most abundant — and while Olfenbuttel is still in the process of compiling that data, initial results indicate that there’s less food for bears in the woods than in the average year. That makes them more likely to seek sustenance from human food.

The ringing phones back up those results. From Jan. 1 to Oct. 1, the Wildlife Commission fielded 1,202 calls about bears, a 46 percent increase over the 825 calls received over the same period in 2017.

“Starting in about late August through now, we’re getting phone calls from the public who are doing the right thing,” she said. “They’re being bear-wise. They’re securing their trash, they’re removing their bird feeders, but they’re calling us still wondering ‘Why are there bears in my backyard?’ And it’s because they have an oak tree that’s producing acorns.”

Bears are frequenting human communities more, and they’re also proving harder to scare away, Olfenbuttel said. When a bear is hungry, it will end up caring more about a potential food source than about whether there’s a person yelling at it from the porch.

The Swannanoa incident hasn’t been the only recent bear encounter to turn violent recently. On the evening of Aug. 16, a Biltmore Forest resident ended up shooting and killing a bear. The encounter, Olfenbuttel said, was the result of the bear’s interest in the man’s bird feeders.

“It escalated to a point that person felt like their safety was at risk and ended up shooting and killing the bear,” she said. “The overall neighborhood was very upset about that incident.”

State law allows people to shoot wildlife if the animal is in the act of damaging property or threatening human safety, and an investigation concluded the man was in compliance with the law. However, the Wildlife Commission is now working with the community to educate members through its Bearwise initiative, aimed at teaching people how to safely live in bear country.

An official report on mast survey results won’t be complete until the end of the month, so as of now it’s hard to say whether production has been a total failure or just less than desirable. Multiple factors drive acorn production — it’s hard to pinpoint exactly why any one year proves more or less productive than another.

One the whole, though, extremely wet years seem to result in lower production, Olfenbuttel said, and this year was definitely wet. Late freezes can also be problematic, especially at higher elevations where cold sticks around longer.

Then there’s the age of the oak tree. Trees have to be about 40 years old before they hit peak acorn production, and after age 80 or so production declines again. As a whole, Western North Carolina’s forests tend to be older, with more and more oak trees approaching and passing that 80-year mark and few young oaks replacing them.

“There’s real challenges to oak regeneration in the mountains, and we’ll see what happens but without doing more we’ll start to see a lot of oak trees start to age out, and they’re not being replaced with younger oak trees,” Olfenbuttel said. “We could start seeing more poor to fair mast years in the future if we don’t do more to encourage oak regeneration.”

At a recent meeting of bear managers from states across the Southern Appalachians, the biologists discussed bear-related issues and in particular observations related to acorn production.

“My sense from last week’s meeting is overall everyone is poor to fair with acorns,” said Olfenbuttel. “White oak is poor, red oak is fair, depending on your elevation.”

Bear management in the Smokies

Unlike the Wildlife Commission, the Great Smoky Mountains National Park does not do an official mast survey each year. However, anecdotally things are looking better in the park than what Olfenbuttel’s seeing in North Carolina.

Stiver said he hasn’t seen anything out of the norm when it comes to reported bear encounters other than the normal seasonal cycling of things. Pretty much every year, bear conflicts begin in late May and peak in June, after which they drop off as berries ripen and bears have an easier time finding food. Conflicts then typically increase once more to a peak in early August, dropping off again in late August and early September as acorns and other nuts become available.

Like the Wildlife Commission, the park has had to euthanize one bear this year, related to a search for a missing ginseng poacher in early September. William Lee Hill, 30, was found dead Sept. 11 after a two-day search near Cades Cove. An aggressive bear was in the area and was found to have been feeding on Hill’s remains. While the bear’s aggressive behavior led park officials to euthanize it, Hill’s actual cause of death is unknown. 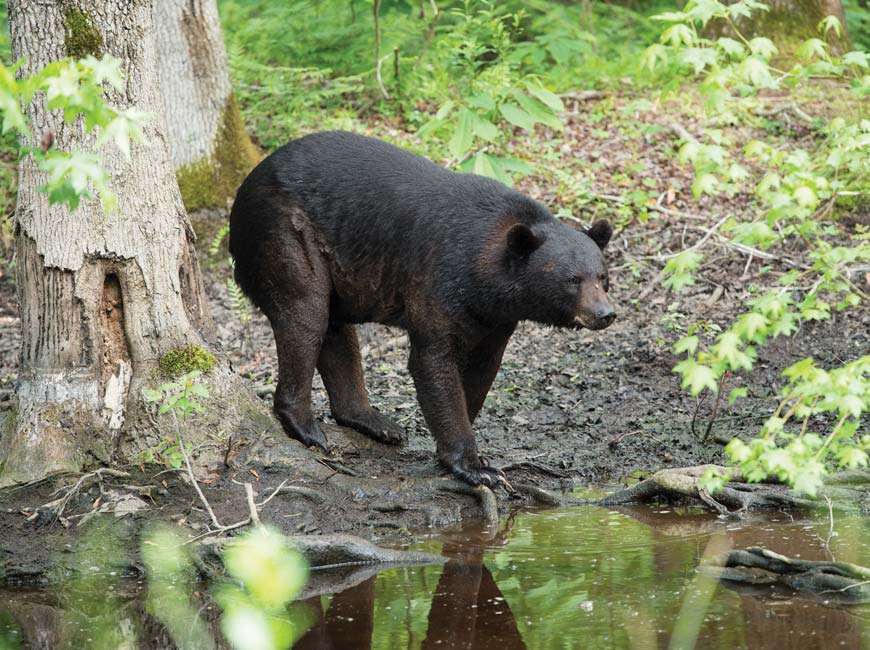 “You can’t say that was a bear attack. It’s too early into the investigation to say anything about that,” said Stiver. “Bears are omnivores and even though most of their diet is acorns, berries, nuts, things of that nature, they’re going to take advantage of any food source that’s out there.”

The National Park Service is investigating the incident, and an autopsy has been ordered. However, results could take months to come back, the park executive assistant Jamie Sanders said in an email.

Educating visitors about bear safety is a constant challenge for park staff, said Stiver. The Smokies is home to about 1,600 bears, and more than 11 million people visit annually.

Despite the steady increase in park visitation over the past decade, the park has not seen a steady increase in reported bear incidents. The numbers are up one year, down the next. In 2017 the park had the lowest number of incidents in the last 10 years at 231, but the previous year, 2016, there were 466 incidents — the highest in the period except for the 497 reported in 2011.

A variety of factors affect those statistics — the availability of natural food that year, park visitation and human behavior, for starters. Back in the late 1980s the park captured about twice as many bears as it’s done at any point in the past 10 years because it wasn’t very good at handling its trash at that time, Stiver said.

The decision to euthanize

The N.C. Wildlife Resources Commission has gotten some blowback for its decision to euthanize a mother bear and relocate its trio of clubs after it attacked a Swannanoa woman, but a blog post from the agency walks readers through the reasoning that led to that decision.

“When bears behave defensively, they typically withdraw as soon as they view that the threat is gone,” the post reads. “However, the bear in this situation did not withdraw and continued to bite and scratch the victim, despite the victim responding appropriately prior to and during the incident. The bear’s behavior was not typical of what we normally see in bears.”

Bears are likely to repeat aggressive behaviors once they’ve learned them, and to teach those behaviors to cubs. Relocating the bear wasn’t possible, as several studies have documented how adult bears will make every effort to return to their original home range. Similarly, the post said, adult wild black bears don’t cope well with permanent captivity.

“It actually would have been very inhumane to have implemented this option. While this idea makes a lot of people feel better about the outcome, wild bears are stressed to the point that they have severe mental and physical issues in captivity,” the post said.

According to Wildlife Commission biologists, however, the cubs were old enough to live independently and should thrive in the “remote region” they were relocated to. Unlike adult bears, the post said, cubs won’t necessarily return to the site of capture.

The incident marked the second time in the past 10 years the Wildlife Commission has euthanized a bear.

The N.C. Wildlife Resources Commission has launched an education campaign aimed at teaching people the six rules they must live by to prevent bear conflicts. The rules are: