A love so full it could send us all ways: A conversation with Gavin Rossdale 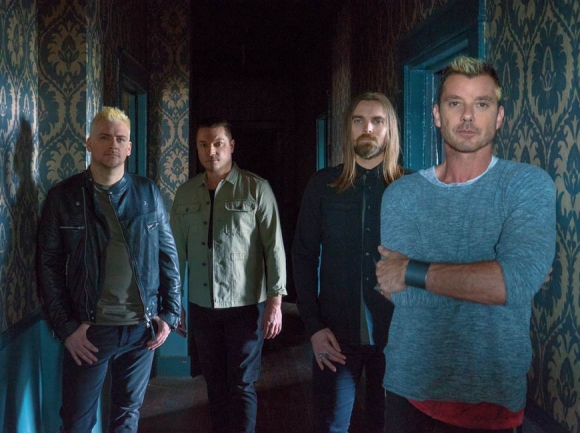 In the mid-1990s, just as the raucous nature of the grunge scene in the United States was hitting its peak, a wave of new rock acts from across the pond began to explode across the radio dial.

British groups like Radiohead, Blur, Oasis and The Verve were finally breaking into the mainstream, many after years of chipping away in the underground. And right at the forefront of this “seize and conquer” quest by these now legendary acts was, and remains, Bush.

Led by singer/guitarist Gavin Rossdale, the group burst onto the scene in 1994 with its seminal album “Sixteen Stone,” a multi-million selling release that spawned several hit singles (“Everything Zen,” “Comedown,” “Machinehead,” “Glycerine”), melodies — more so personal anthems of Generation X and early Millennials — that continue to be radio staples of the era.

But, unlike a lot of rock acts from both sides of the Atlantic Ocean in the 1990s, Bush has managed to stay in the public eye, whether it be the subsequent albums following “Sixteen Stone” that kept the train of creativity and quality rolling along through the digital age or the group’s highly successful nationwide tour this past summer with Stone Temple Pilots and The Cult — two fellow bands who also possess a constant urge to create, an unrelenting zest for live performance.

And yet, at the center of it all, is Rossdale. A music, fashion and pop culture icon in his own right, he’s still just as focused as ever, where the simple notion that “it could all go away tomorrow” puts fuel on his fire to get up every day and do what he does best — make music.

Smoky Mountain News: You’ve had the success and the legacy no matter what. What is it for you now that is the focus for why you get onstage and why you create?

Gavin Rossdale: Oh, because, first, I know nothing else to do at this level. Secondly, I love it. I’m one of those people that feels that everything is unfinished business. It’s a vocation, like I have no choice. I’m in it, and it just works. These last couple days, I was writing a song and had to do some surgery on it. And I couldn’t think about it, sitting around trying to get this song figured, thinking, “Why can’t I get it good?” Then, boom, last night it comes to me.

SMN: “Sixteen Stone” turns 25 next year. How does that album stand up these days?

GR: People would sometimes talk about the lyrics being too fragmented. And the weird thing is, I never liked to be specific in a certain way. And one of the reasons was that I’ve always liked the lifetime of a song. And to not have it nailed down to a time and place gives it the ability to have its own journey. I can sing any single one of them, and I often do sing them at night, and the lyrics are completely present day. I don’t sort of sit and reflect, “When it was” and “What it was” and “Why it was.” There’s enough venom in me to focus on where I’m at now and what things could be, either satisfying now or inspiring and endearing, things I’m excited about. It’s been a weird journey — they live with me all the time.

SMN: Well, and they probably have new meaning as time goes along…

GR: Of course. Every day it’s a different meaning. Every single song that has been made in history, you can tell me “it’s about a tree,” but, as soon as it’s out in the public, and someone else decides it’s about something else, it’s no longer about a tree, the tree becomes completely subjective. So, that’s the most powerful thing about music, it’s just transferable for every single person listening. Therefore, it’s the same if you sing it with a 20-year gap — clearly you can’t be thinking about the same thing. It’s very natural.

SMN: You’re someone who has been in the public spotlight before and after the advent of social media and the inundation of the internet. What do you see as the differences between then and now?

GR: Obviously people today probably are far more accountable and more exposed. You can’t trip and fall, literally, without someone catching you on video and then sharing it with everyone. So, people’s frailties and humanity are definitely brazenly displayed — that’s the time, the age we live in. You know, I look throughout history, and the time it was greatest, was when stars had private lives, were anonymous, and could be any person behind the façade of so many people. I like that, I like mystery. The singers and actors that I love, I don’t need to know too much about them, too much context. It was enough with what they made.

SMN: How has your definition of the word “love” changed or remained the same as you’ve gotten older?

GR: It has just gotten more tolerant as I’ve gotten older. Within that whole scope, you feel that strength, that power of love your whole life. Whether you get it or don’t get it, you’re aware of it — the confidence when it’s given, the lack of confidence when it’s taken away. The thing that changes for me is tolerance, you know? Empathy, seeing stuff from other people’s perspective. It’s the adage of “the youth is wasted on the young.” That’s just it. With tolerance becomes such quicker resolution to everything. Tolerance is such an easier life — it’s amazing.

Editor’s Note: To listen to the complete audio stream of this conversation, go to YouTube and search “Gavin Rossdale Garret K. Woodward.”

Renowned rock act Bush will take the stage at 9 p.m. Friday, Sept. 28, at Harrah’s Cherokee Casino Resort. Tickets start at $29. For more information and/or to purchase tickets, visit www.harrahscherokee.com and click on the “Events” tab.