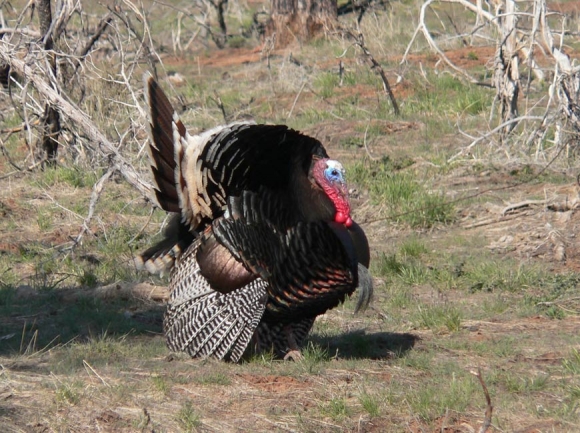 The comeback of the wild turkey in the southern mountains in recent years is one of the notable success stories in wildlife restoration. Thirty or so years ago, the sighting of a flock of wild turkeys was a rarity. Thanks to the combined efforts of the National Wild Turkey Federation and its local chapters, working in conjunction with federal and state wildlife agencies, such sightings — while always memorable — have become rather commonplace.

The demise of the great bird in the face of over hunting and habitat destruction is a part of the story that’s been recited many times in wildlife publications. Another part of the historical record that’s been overlooked, however, is body of lore having to do with rituals and hunting methods of the ancient Cherokees.

The turkey population at the time of European contact has been estimated at 10 million birds. The bird was especially plentiful in what became the southeastern United States. In the region presently occupied by state of Georgia, it has been estimated that the population exceeded 500,000 birds. Flocks numbering several hundred turkeys were commonly reported by early observers.

Deer and turkey were the favorite game animals of the Cherokees. They knew the turkey as “gvna” (or sometimes “duleji”), which means “kernels” — a reference to the bird’s red throat appendage that has a kernel-like texture. Another name applied only to male gobblers was “galagina” — which is glossed as “buck” — in association with the male deer. That the turkey was the most important of the avian fauna hunted by the Cherokees was clearly symbolized by its having led all the other wild birds out of the earth in their creation story depicting the origin of game and corn.

According to their mythology, the bird acquired many of its distinctive attributes as a result of specific incidents. The black “beard” that mature males have on their breasts is “actually” a scalp that the ancestral wild turkey stole from the ancestral terrapin. One day the bird met the turtle coming home from a war with a fresh scalp hanging from its neck.

“That scalp doesn’t look right on you,” the turkey said.  “Your neck is too short and low down to wear it that way. Let me show you.”

After putting the scalp around its own neck, the turkey “kept on walking ... and then broke into a run,” escaping with the scalp, which, in time, became breast feathers. But before the turkey made his escape he was shot in the legs with cane splints by the irate terrapin. While eating a drumstick, have you ever noticed the numerous splintered, seemingly useless bones? Now you know how they got there.

The grouse obtained its fine collar of turkey-like feathers in exchange for giving the larger bird voice lessons.

“I’ll stand on this hollow log, and when I give the signal by tapping on it, you must halloo as loudly as you can,” instructed the grouse.

But, alas, when the grouse suddenly drummed on the log, the turkey was so startled it couldn’t shout loudly. What came out instead was a surprised “gobble, gobble, gobble.” That’s why, whenever the male hears a sudden noise in the woods, he can only gobble.

The wild turkey became an essential element in the performance of major Cherokee ceremonies. Its meat was consumed during annual religious festivals. Large turkey-feather fans were waved over each new chief at his inauguration ceremony. Beautiful capes were made for important events from turkey feathers sewn like overlapping shingles onto skins or cloth (an excellent example of this type of garment is on display at The Museum of the Cherokee Indian in Cherokee). Cockspurs were fastened to warrior’s moccasins and the long stems on their war pipes.

The Cherokee turkey dance mimicked the movements of both the hunter and the turkey, no doubt enacted on the theory that if you know how a bird feels and moves you have a better chance of anticipating its actions in the woods. Various formulas were sung before the hunt so as to exert magical power over the bird and make it come forth from cover. Not surprisingly, all of the recorded formulas had to do with observing turkeys in open, upland coves while the birds scratched in the leaf litter. In other words, the cautious birds would hopefully be located out in the open where they could readily be stalked or ambushed. Try singing this little formula (softly) the next time you go looking for a wild turkey:

We are living in one cove, a flat and level cove.

We are scratching, spreading leaves, in just one cove.

Tail feathers spreading first one side, then the other.