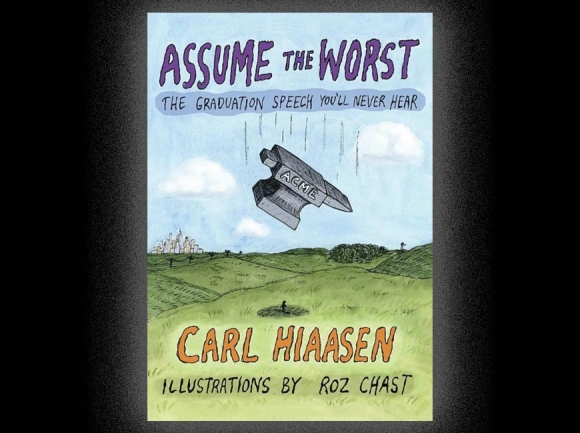 About 15 years ago, I was listening to a female critic discussing the seasons’ upcoming movies. When the moderator mentioned Mel Gibson’s “The Passion of the Christ,” the critic laughed and said, a little bitterly, “Well, we’ll all have our knives out for that one.”

What a strange comment, I thought then. And think now, for that matter. Why would anyone decide ahead of time to rip into a book, a film, or a play?

Some of you who have followed this book review column over the years may wonder why you find so few negative reviews here, so few snarky comments, so few occasions where your reviewer hauls out a blade and eviscerates a book? Am I, you may wonder, incapable of a nasty review? Am I some sort of Pollyanna critic, a Mr. Merry Sunshine of the literary crew?

Naw. The answer is much simpler than that.

You see, about 90 percent of the time, or more, Mr. Scott McLeod allows me to review whatever books I please, whatever titles jump off the shelves of a bookstore or the local library and into my hands. Given Mr. McLeod’s liberality in my choice of books, why on earth would I pick for review a book that didn’t in some way interest me enough to read it?

Those interests of mine may be of interest to readers too, because they influence what I review. Almost any book about books seizes my attention, as does any novel with the words book or bookshop in the title. Sometimes I bumble into novelists like David Hewson, enter under his spell, and review several books at a time. A new James Lee Burke novel will usually come under review here; occasional books of poetry and art pull me into their orbit; certain biographies — I just reviewed one on Bette Davis, an excellent book though I am not a big fan of her films — yammer at me to read their pages.

Frequently, too, the book that whistles to me from a library shelf loses its luster as soon as I riffle its pages at home. The sensation is that of sitting in a bar near closing time beside a new-found companion who strikes you as attractive until the management flips all the lights on.

At any rate, keeping that process in mind, let’s take a look at Carl Hiaasen’s Assume the Worst: The Graduation Speech You’ll Never Hear (Alfred A. Knopf, 2018, approximately 20 pages, depending on what you count as a page).

I selected this books for several reasons. First, the length: an average reader could gobble down Assume The Worst, including the illustrations by Roz Chast, in about the time it takes to eat a meal at McDonald’s.

Second, I am a sucker for published graduation speeches, and have read them by the likes of Josiah Bunting and J.K. Rowling of Harry Potter fame. (An aside: once I was paid a goodly sum to speak at a high school graduation. Gentle reader, I bombed. Ka-Boom! Never again, I vowed, and never again it has been.) Third, I hear a lot about Carl Hiaasen as a novelist and columnist, have never read him, and thought this small book might be an easy introduction.

Parts of Assume The Worst, including the title, appealed to me. Here is, as the subtitle says, advice most graduates would hear. Live each day as if it’s your last? Ridiculous, says Hiaasen. If you set your mind to it, you can be anything you want to be? Again, Hiaasen knocks that one down, rightly pointing out that if you still believe this at graduation, then you are living in a bubble. Try to find goodness in everyone you meet? Don’t be quick to judge others? Hiaasen makes mock of both of these platitudes, though having been judged by others who don’t know all the circumstances of my life, I disagree with him on that last one.

Now, I noted above that I don’t want to waste my time with books unappealing to me. Here I have to say Assume The Worst ended up being about as appealing as Finnegan’s Wake, but because it was so short, the discomfort was minimal.

Here’s what I disliked:

First, the price. A retail price of $15.95 is ridiculous for a book no thicker than my cell phone. Doubtless someone designed the size and price to appeal to grandparents giving the book to their non-reading graduate.

Next, the cartoons just aren’t that funny. They do illustrate the text, but readers have to wonder whether they weren’t included just to bulk up the book.

Both the text and the cartoons are also shot through with politics, in this case from a liberal point of view, but either way I would have found the politics annoying. Can we really not do anything anymore, including delivering a graduation speech, without bringing in climate change, Richard Nixon, and the stupidity of those who don’t live on the Coastal United States.

Finally, at one point Mr. Hiaasen writes regarding his work in the media: “… the only excusable reason for becoming a reporter was to expose things that were wrong and unjust, on the slim chance that somebody in authority might do something about it.”

Baloney. The reason to be a reporter — and many reporters and non-reporters forget this today — is to report a story as truthfully, as accurately, and as factually as possible. The expose follows investigation and accurate reporting.

On the front flap, an editor of this book writes “Assume The Worst is the best gift anyone, at any age, can give.”

I’m afraid I still prefer “Expect the best. Prepare for the worst.”

And as for best gifts, I am up for checks between four and six figures. Please send them care of the newspaper.