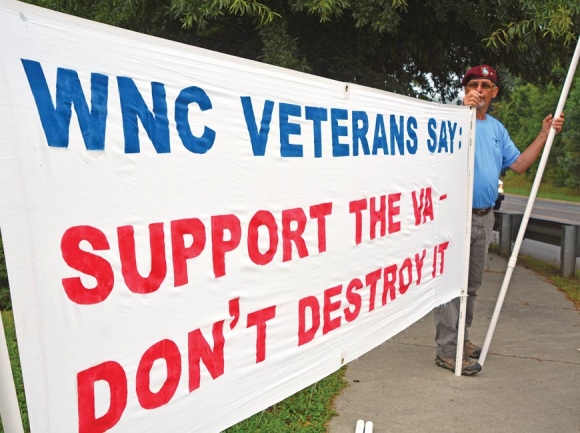 Bob Houde of the Carolina Veterans Peace Coalition was among the first to show up at an appearance in Waynesville by Rep. Mark Meadows Aug. 10. Cory Vaillancourt photo

Last August, three-term Asheville Republican Congressman Mark Meadows held his fourth Veterans Solutions Seminar in Waynesville. Last week, he held his fifth. The difference is that this time, protesters were waiting for him.

“We’re here because he’s co-sponsored a bill called the Veterans Empowerment Act, and that bill, basically when you read through the whole thing degrades the Veterans Administration’s health care system,” said Hendersonville’s Bob Houde, founder and chair of the Carolina Veterans Peace Coalition and nine-year veteran of the U.S. Army and Navy.

As reported in Stars & Stripes last fall, the bill would have increased the amount of taxpayer-funded care administered to VA patients by private sector providers and was vehemently opposed by both the VFW and the American Legion.

“It’s bad because the Veterans Administration health care system, health-wise, is actually much less expensive than a for-profit health care system,” Houde said. “Mr. Meadows and those who think like him literally would prefer to remove any and all, we believe, safety nets for the population as evidenced by their votes with regards to the affordable care act, which they’re still trying to do away with.”

At the Aug. 10 event, Meadows said “the bill that they’re talking about actually is dead.”

Despite the confusion, a lingering subset of the national healthcare debate — on which Meadows’ position has been quite clear — concerns the nation’s 21 million veterans, about half of which utilize Veterans Health Administration benefits administered through the $270-billion cabinet-level U.S. Department of Veterans Affairs.

“We believe it’s a social contract that’s established that when we enlist or get drafted, that in the end we are cared for,” Houde said. 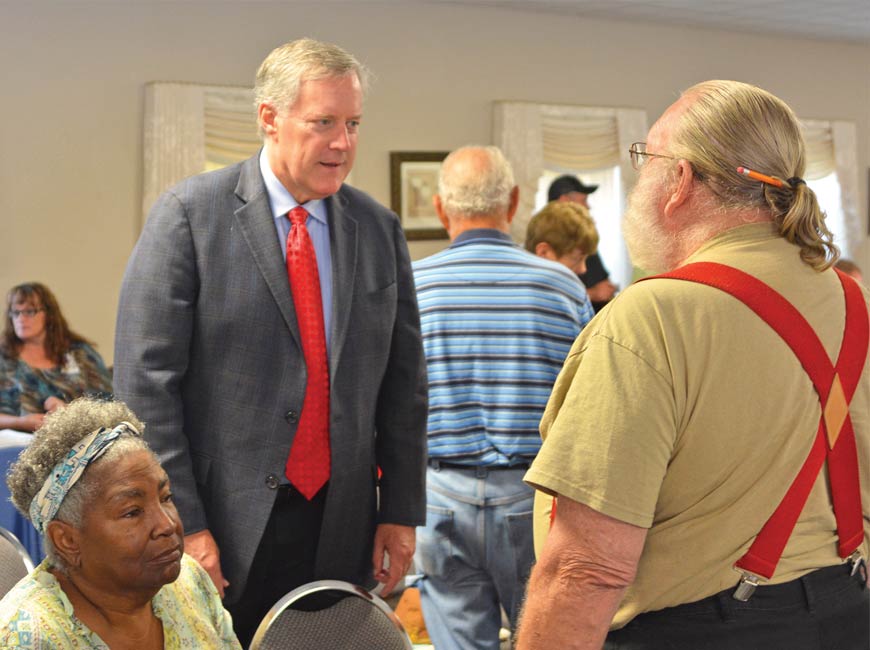 There with Houde was Vietnam-era Navy veteran Bruce Macdonald, of Veterans for Peace.

“When I was standing watch on the bridge of a destroyer in the middle of the Mediterranean Sea, I never thought ‘Wow, when I’m 70 I’ll get great health care from the VA! I won’t have to worry about anything,’” said Macdonald, who is also a cancer patient at the Charles George VA Medical Center in Asheville.

“I knew I had my GI benefits and they basically helped put me through law school but I didn’t really start using VA health care until 2003,” he said. “It’s been great. Although I didn’t think of it back then late ‘60s and early ‘70s, I’m glad it’s around and I think it’s a promise the country’s made to veterans.”

That promise was indeed made March 4, 1865, on the occasion of President Abraham Lincoln’s second inaugural address, as thousands lined a mucky Pennsylvania Avenue in Washington, D.C., to hear Lincoln speak from the East Portico. The Civil War was all but over, as was his life.

“With malice toward none, with charity for all, with firmness in the right as God gives us to see the right, let us strive on to finish the work we are in, to bind up the nation’s wounds, to care for him who shall have borne the battle and for his widow and his orphan, to do all which may achieve and cherish a just and lasting peace among ourselves and with all nations,” he implored, while his 26-year-old assassin looked on from the crowd.

The VA — whose motto is “to care for him who shall have borne the battle, and for his widow and his orphan” — has since 1930 been doing just that, to varying degree of efficacy, depending on who one asks.

“Unfortunately many politicians, and Mark Meadows is at the forefront, are really abrogating that motto and are putting our health care in great jeopardy, and that’s why I’m here,” Macdonald said.

Meadows says the entire purpose of his vet events — of which Waynesville’s was but one of many around his sprawling, mountainous district — is to help facilitate the benefit claims of area veterans; he keeps doing them, he said, because he sees results.

“Probably the most heartfelt story that I can remember happened right here in Haywood County where we had someone who was homeless who happened to find out about it, showed up, he went from homeless with no benefits to [being] in a place that was warm and comfortable with benefits in 10 days,” he said as the Aug. 10 event was winding down.

“Those are the ones that keep you coming back, but it’s really about honoring our veterans,” said Meadows. “Their service to our country is undeniable, and we just need to cut through the red tape and oftentimes there’s a lot of red tape.”

As chair of the conservative House Freedom Caucus, Meadows is seen as an opponent of socialized anything — especially health care, evidenced by his prominence in the Affordable Care Act repeal effort.

Even though he was one of the original co-sponsors of Colorado Republican Congressman Doug Lamborn’s Veterans Empowerment Act, along with Arizona’s Republican Rep. Trent Franks, not only does Meadows no longer support the bill — currently mired in and unlikely ever to emerge from the House Subcommittee on Veterans Affairs — he all but repudiates it.

“We’ve asked to get off of that bill, and we’ve already passed the bill that actually all the veterans associations want us to be for in May,” said Meadows of the VA Mission Act, which opponents still call a slow erosion of the VA with an eye on privatization. “I voted for that overwhelmingly. My commitment to veterans is 100 percent.”

“We believe it is the full intent to in fact take the entire system into the for-profit health care part of the economy, and that’s what we’re against,” he said. “Even if they were to pull it back now their intent is obvious just by the fact that they sponsored the bill.”

Meadows, however, offers reassurances that unlike his stance on Obamacare, he sees things somewhat differently in regard to the privatization of health care for the nation’s veterans.

“We’ll never vote to privatize it,” he said. “Originally that particular bill was designed to help some of the rural communities and that’s why I got on it originally, but we had some people that were concerned that it might lead to privatization, so I gave them my 100 percent commitment that not only will that not happen, but it will never have my vote when it comes to that.”