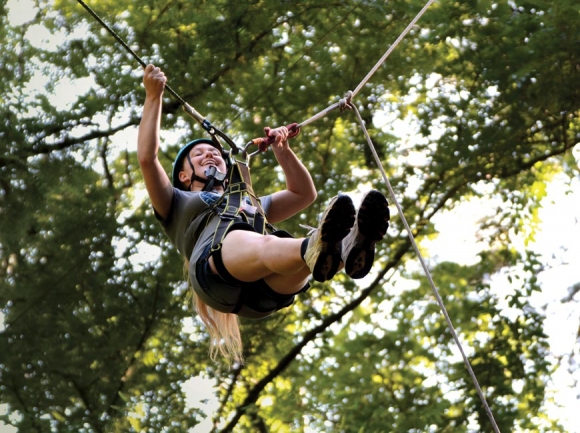 A camper prepares to release herself from the anchor to take an adrenaline-inducing ride on the ‘swing’ at Nantahala Outdoor Center. Holly Kays photos

When Sam Chandler heard that the summer camp he’d been attending for years planned to launch an adventure camp, he was sold. Chandler — who at 17 is a rising senior at Tuscola High School in Waynesville — was quick to sign up for the week of ziplining, hiking and whitewater rafting at the Nantahala Outdoor Center. He came back for a second year, and, when he’d maxed out the two-year cap on adventure camp attendance, returned this year as a counselor.

It would be a common story of summer camp memories and corresponding summer camp allegiance, but for one simple fact: Chandler, like the rest of the teens embarking on these outdoor excursions, is mostly blind.

“We get all these blind kids from all over the Southeast, and a lot of them are from big cities so they’ve never been out here. They’ve never done this,” said Chandler. “A lot of them have been told you’ll roll silverware at some fast food joint for the rest of your life, but clearly, we can get you out here and do this — that’s not a thing. That’s not what you have to do. This just opens up so many options. It builds confidence.”

That’s certainly what it did for him.

Chandler well remembers his first time at camp, and in particular how freaked out he was as the group prepared for whitewater rafting. Chandler is completely blind in his left eye and mostly blind in his right — what would happen if he fell out of the boat, or failed to adequately avoid a rock? But as he stroked his way through the experience, those fears subsided.

“I realized as long as you follow what your guide’s telling you, it’s going to be fine,” he said. “It’s all good. No stress.”

Jay Hardwig, director of SEE Adventure Camp, is an outdoors guy himself. Though not visually impaired, he’s worked with those who are for the past 20 years, first as a teacher at the Texas School for the Blind and now as a visually impaired specialist for Haywood County Public Schools and manager at Asheville-based blind services organization A Brighter Path Solutions.

A Brighter Path is supported by IFB Solutions — originally known as Winston-Salem Industries for the Blind — which runs not only the adventure camp at NOC but also four other summer camps throughout North Carolina, all free of charge for campers. Hardwig originally got involved running the SEE Day Camp in Asheville, but when that camp began filling up too quickly, he decided to start a full-fledged adventure camp.

“We hope to build some confidence that they can do some of these things that they haven’t tried before,” Hardwig said. “We hope they’re more comfortable with outdoor experiences, whether it’s sleeping with the sound of crickets or taking a hike or getting out on the water. Part of that is to build it into their repertoire of what they can do.”

To those on the outside, it might sound pretty crazy to put a bunch of kids who not only have never rafted before but also can’t see into a whitewater raft down the Nantahala, or into a climbing harness, or on a hiking trail. But according to Chris Flynt, who is the camp’s director of programming and nearly blind himself, it’s not necessary to change the activities all that much from how they’d be run with a group of sighted teens.

“They’re experiencing the same thing any sighted person would,” Flynt said. “We just have to have a couple extra eyes around, just to make sure things are good.”

“In some ways, the most challenging thing we do at this camp is our hike,” Hardwig added.

Some of the campers have never been more than a quarter of a mile off pavement before, and navigating the unpredictability of roots and rocks along a mountain trail can be a lot harder than just jumping in a raft down the river. But they all do it, he said, and they’re all proud of themselves afterward.

“Even if you stumble and fall and skin your knee, that’s OK with us,” Hardwig said. “In fact, skinned knees should be a part of every childhood I think, and some of these kids don’t get that opportunity often enough, because sometimes they are overprotected. So I’m not really too worried if we take a tumble on a trail as long as it doesn’t result in injury.”

As for the other activities, he said, it’s interesting to see the range of reactions. On the zipline, for example, some kids are pretty scared because it’s up high and they can’t see what’s around them.

“Then we have other kids who are less scared than you would think because they can’t see where the ground is, so they just don’t worry about it,” he said.

Kelly Jones, 16, had no apprehensions about the itinerary when she signed up to attend SEE Camp.

And for an enthusiastic go-getter like Jones, it was pretty great. But the best part of the camp wasn’t about what she was doing — it was about who she was doing it with.

“For me, it’s honestly about meeting blind people,” she said. “I go to school where I think I’m pretty much the only blind person there out of 4,000 kids. During the year I feel very isolated, and I get here and I find instant friends because there’s this connection you don’t even have to work for. It’s like I’m with my people, and that’s such an amazing feeling, honestly.”

Jones’s sight is better than that of most of her fellow campers. She’s legally blind but has a narrow visual field, with poor distance vision and nonexistent night vision. She’ll never be able to have a driver’s license, but she can see well enough that most of the time she tries to “pass as sighted” out in the community — though, for someone who considers herself to be a “pretty sporty person,” team sports are out of the question. Instead, she does solo activities, like running and lifting weights. 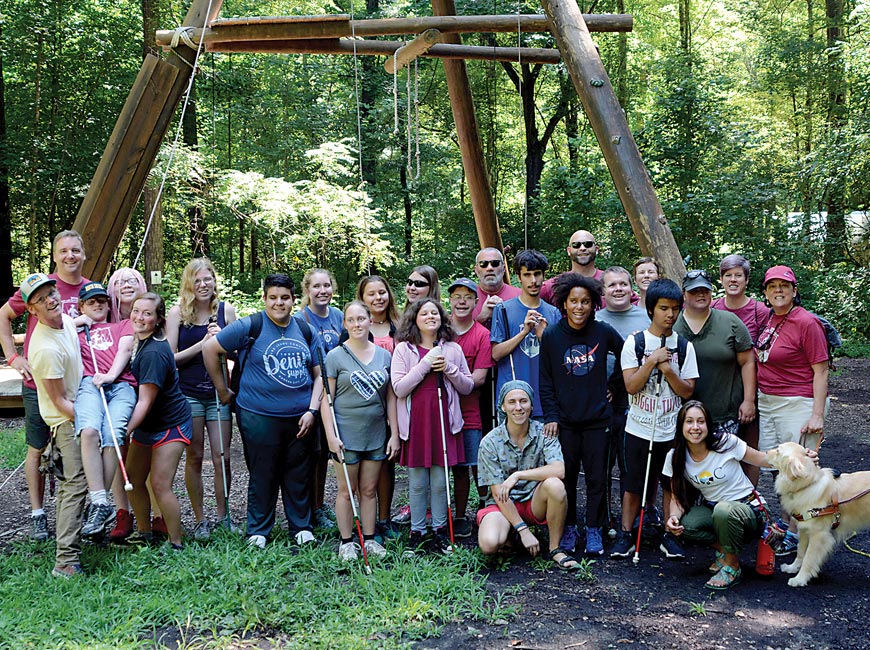 Being able to live the active lifestyle she loves in company that understands what it means to be blind is a freeing experience.

“I don’t have to worry about embarrassing myself and passing as sighted, because I often do that at home. Here it’s like, ‘This is who I am,’” she said. “It’s so relaxing.”

It’s a refrain often repeated when chatting with the campers at SEE Camp.

“I think the best part was the ziplining or the whitewater rafting, but actually what I enjoyed most was being around people like me. Other blind people,” said Juan Acosta, 18, of Warner Robins, Georgia. “I feel like I’m the only one like me where I live.”

Acosta, unlike many other campers at NOC that week, actually attends a school for the blind, so he does get to be with other blind people in the course of his daily life. However, he’d never met someone with his same particular vision problem until arriving in Swain County.

“Here I’ve met some people who share the same condition, the same kinds of problems,” he said. “We have a lot of things in common. I feel good because I feel like I’m not alone.”

Whether blind or sighted, being a teenager is a continual struggle between trying to be yourself, assert your difference and be proud, and trying to fit in, fly below the radar and blend in with the “cool” kids. SEE Camp is a gift for the kids who go there, because there they can fit in without trying. They don’t have to explain themselves to peers who don’t understand or harbor anxiety about awkward situations, like bumping into someone when navigating a crowd or getting lost in a building. They can speak openly about their challenges, compare notes on different cane designs and discuss the pros and cons of guide dogs.

“I’d rather be around blind kids because they understand, and sighted kids might not understand me,” explained Meredith Landreth, 16. “I like being around other blind kids like me, not just sighted kids.”

While Hardwig is a big proponent of the camp’s adventure component, he’s quick to say that it’s the community that really works the magic.

“What they tell us again and again is that what is special to them is that sense of community and family,” he said. “I think they gain more in the white spaces of the schedule where they can be with each other and compare notes and build friendships.”

Some of the kids at SEE Camp have other disabilities that accompany their blindness. But for most of them, it’s just about a lack of sight. That’s something that Chandler, for one, wishes more people understood.

“It doesn’t mean anything as far as mental capabilities or any other sense,” he said of his blindness. “It’s completely unaffected. Until you are notified otherwise, we can operate on our own just fine, which is a little irritating when someone just assumes that because you’re blind you are also mentally handicapped.”

Half a minute of conversation with Chandler, who dreams of earning a Ph.D. to teach college history, is enough to make it clear that he is in no way mentally handicapped. That goes for many of his peers at camp as well, among whom are aspiring lawyers, writers, scientists and more.

“It gives them confidence not only with people that are similar to them with the same issues and challenges, but when they go home their parents notice a difference,” he said. “We hear that from the parents. That’s just a fact. This is an experience the kids will never forget.”

SEE Summer Camps in Bryson City, Asheville, Charlotte and Winston-Salem offer a variety of experiences for blind and visually impaired youth from across the Southeast. Supported by IFB Solutions, camps are offered for free, but space is limited.